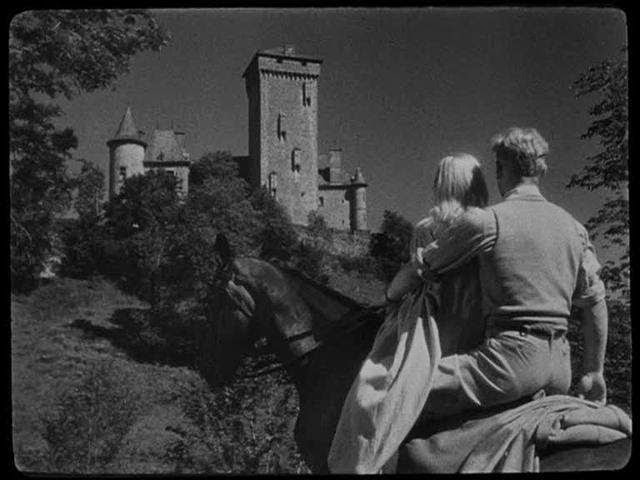 May 26th saw a rare screening of Jean Delannoy’s  L’Éternel Retour at the Birkbeck Cinema as part of the ongoing ‘Tragedy and Sexuality’ season. Written by Jean Cocteau, the film serves as a sort of a predecessor to his famous La Belle et La Bete (1946), drawing upon similar fairy-tale elements and medieval myth in its retelling of the Tristan and Isolde tale. But this film is more ambivalent and more troubling than the Villeneuve adaptation, its ambiguities teased out by Dr Ruth Austin of UCL in her introduction.
L’Éternel Retour was made during the German occupation, but may immediately seem to lack the subtle resistance politics that have been identified in Cocteau and Bresson’s 1944 Les Dames du Bois de Bolougne by the likes of Jean-Luc Godard and Serge Daney. As pointed out in the introduction, the two lovers (Jean Marais and Madeleine Solonge) in Delannoy’s films are almost supernaturally Aryan, chiselled and golden like two Nazi demi-Gods, and they are ultimately betrayed and doomed by a family of grotesques, including the malevolent dwarf Achille. One may see in this a reflection of Nazi race politics, an implicit support of eugenics in the presentation of the destructive wickedness of the ‘inferior’ (and one must not forget that Cocteau, early in the war, criticised France for showing ‘disrespect’ towards Hitler and was later accused of collaborationism).  And yet, as Austin explained, there are other things at play in L’Éternel Retour: a sympathy mixed with the revulsion, a building of something beautiful which is trampled upon by massed dark forces that could easily be read as an allegory for the Nazi domination of France, portrayals of non-evil non-Aryans and a drive towards timeless fable that also, perhaps, carries with it the drive to escape (or transcend) contemporary histories.
It is much easier to identify L’Éternel Retour with Cocteau than Delannoy, but perhaps this would be doing a disservice to the director. We may see in the use of light and mist, the milkiness of the black-and-white and the images caught between idealism and greasy reality the mark of the director-to-come who had already completed  the short Blood of A Poet in 1930, and was just a few years from directing his masterpieces in La Belle et La Bete and Orphee (1949), but this easy identification may, in fact, speak to how much Cocteau took from his experiences with, and the style of, the two film-makers who directed his screenplays during wartime. Indeed, one can read the balance between restraint-and-opulence in …Bete and Orphee as Cocteau embodying, at once, the feel of glamorised fairytale hypnagogia that Delannoy manages to hit upon in stretches of L’Éternel Retour, and the flinty, icy desolation that Bresson would find at the heart of Cocteau’s script, beneath the jewellery and the floridity, the following year.
The film was sourced with some difficulty, the DVD release in France being without English subtitles, but the version shown had a luminosity befitting the bleached hair and golden sheen of Cocteau and Delannoy’s lovers, and the screening was followed by a panel discussion between organiser James Brown, Ruth Austin and the audience on the themes of guilt, tragedy and sexuality that the film explored.