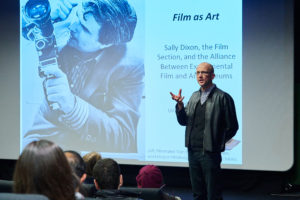 BIMI is funded by the Schools of Arts, Law, and SSHP (Social Sciences, History and Philosophy), and by the Department of Psychological Sciences. We are also supported by the University of Pittsburgh, with whom we have a close collaborative relationship. Our Steering Group is made up of representatives from the contributing Schools and Departments across Birkbeck, as well as postgraduate student representatives, and our programme reflects the multidisciplinary and interdisciplinary nature of BIMI’s supporters.

BIMI is essentially collaborative in nature, and the principal reason why we are able to punch way beyond our weight as a programming venue and research institute is because we work with a wide range of PARTNERS, at home and abroad, who help us intellectually, creatively and materially to realise our numerous and diverse projects.

With our colleagues from the University of Pittsburgh we organise the annual Pittsburgh Lecture and a biennial BIMI-Pitt Research Workshop, and we send and receive postgraduate students and occasional faculty visitors.

Within Birkbeck, we collaborate with various research centres and institutes on an event-by-event basis: BIH and BISR; Pears Institute for the Study of Anti-Semitism; Birkbeck Institute for Gender and Sexuality; Birkbeck Interdisciplinary Research in Media and Culture; Centre for Iberian and Latin American Visual Studies; Centre for Contemporary Theatre; Raphael Samuel History Centre; and others.

Just as significantly, we work with many non-university partners in the cultural sector: for example, the ICA, with whom we organise the Essay Film Festival. We co-curate a regular strand of experimental film events with LUX Artists’ Moving Image, and we work closely with important film archives in the UK, Europe, North-America, South-East Asia, and Latin America, as well as with several film festivals, such as London Film Festival, Korean Film Festival, Nordic Film Festival, Irish Film Festival London, and various national cultural institutes, such as the Goethe-Institute, French Institute, Finnish Institute, Austrian Cultural Forum, Camões Institute, and others.