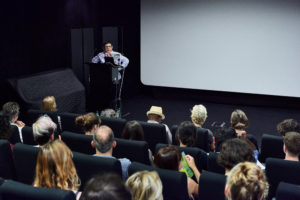 BIMI (Birkbeck Institute for the Moving Image) is a unique place. An exciting research forum housed in a beautiful cinema, BIMI pursues an imaginative public-engagement agenda that combines original and ambitious film curating with top-quality academic research and creative interaction with the artistic and cultural community of London, UK, and beyond.

We programme about 70 events per year, spread over three terms from October to July. These include screenings, discussions, conferences, study days, lectures, book launches and performances, plus our annual international Essay Film Festival (in collaboration with Institute of Contemporary Arts), which has already become a key reference in the film festival circuit (www.essayfilmfestival.com).

All of our activities take place in the Birkbeck Cinema, Gordon Square, which features 16mm and twin 35mm projectors in addition to high-quality digital projection. The variety of formats and the quality of our facilities make BIMI an ideal location for research-led events focusing on the presentation of film, television and video materials from across the artistic and cultural spectrum, and drawing on the full historical range of moving image culture (including archival prints and even magic lantern shows).

We think of our Cinema as a laboratory for ideas, debate and experimentation, embodied by the projection of images and sounds that can move us, surprise us, and inspire us to thought and action.

Our programme is built principally around key thematic STRANDS, all of which involve collaboration with colleagues from across Birkbeck and beyond.

In addition to these thematic strands, we organise many one-off events in response to proposals received from colleagues at Birkbeck and from the wider research community, as well as from cultural institutions and other creative partners.

WHO COMES TO BIMI?

Our events are open to everyone, and almost all of them are free.

As our programme addresses a variety of social, political and cultural issues related to academic research, we attract a broad range of people to our events, including academics, students, artists, curators, independent researchers, activists, and the general public.

Whilst we have a core audience of people interested in film and the moving image generally, and curious to see a variety of rarely screened films and other works, our public tends to change from event to event based on the topic. In some cases, the content of an event may attract a specific community, as occurred with events about pre-revolutionary popular Iranian cinema, the Senegalese historian Cheikh Anta Diop, the Brazilian works of Vivian Ostrowsky, and the essays films of Lebanese filmmaker Jocelyne Saab. In other cases, we may draw a crowd that is specifically interested in a political or social theme or an area of cultural practice, such as the Digital Animation strand, the Fruitvale Film Club, or our events around Urban Change.

How can you use archival film to inspire and inform new stories? The Make Film History project opens up access to 200 archive films from the BBC Archive, BFI National Archive, Irish Film Institute and Northern Ireland Screen for creative reinterpretation by aspiring filmmakers. (more…)

by Biya Shadab On Friday, 13 November, 2020, Bertha DocHouse and the Birkbeck Institute for the Moving Image (BIMI) co-presented the Palestinian documentary Frontiers of Dreams and Fears (2001), an ideal introduction to the beautiful, meticulous works of Mai Masri, one of Palestine’s most distinguished filmmakers. This screening marked the launch of a book on…

Video recordings of the event "Remembering Channel 4's Out on Tuesday: Queer Spaces in Public Service Television", November 2019 2019 saw the 30th anniversary of the inaugural transmission by the UK’s Channel Four Television Corporation of the world’s first public service, free-to air broadcast television series aimed at what was defined at the time as a…

The Caribbean, colonialism, celluloid: Screening the films of the Victor Jara Collective

https://vimeo.com/430351100 A 16mm projection of a documentary about Guyana’s anti-colonial struggles, an anecdote about footage from that film being smuggled in a cricketer’s kit bag, and the film’s score played live on the flute—these were a few of the highlights a packed Birkbeck Cinema experienced at a presentation of the films of the Victor Jara…

https://vimeo.com/408600292 On February 20, 2020, Interim Director of Birkbeck Institute for the Moving Image, Professor Catherine Grant, gave an invited talk at the University of Pittsburgh, in its Film and Media Colloquium series. Talk Abstract According to Mikhail Iampolski, intertextuality is a helpful concept for understanding processes by which allusions to other films or texts…

Video Recording of the Birkbeck Institute for the Moving Image Event “Repetition and Variation: Video Essays as Comparative Film and Television Studies Methodologies”

We are very happy to publish recordings of the five sessions that comprised the BIMI/Corkscrew: Birkbeck Practice-Research Doctoral Training Group event Repetition and Variation: Video Essays as Comparative Film and Television Studies Methodologies that took place on October 12, 2019. Part One features Catherine Grant (Birkbeck) delivering an introduction to the event Part Two features a…

Yugoslav-Serbian filmmaker Želimir Žilnik is one of the genuine legends of European cinema. Since his auspicious debut in 1969 with the film Early Works, which was awarded the Golden Bear at the Berlin International Film Festival, the enfant terrible of Yugoslav New film has created an impressive body of work, remaining committed to his project…

Last June a call for papers went round the School of Arts from the Birkbeck Institute of Moving Image (BIMI) for Pittsburgh University’s annual Film and Media Studies Graduate Conference, taking place the following September. The theme of this year’s conference was Limits of Cinema/Cinema Unlimited? and of the suggested topics what stood out to…

In Memory of Thomas Elsaesser, film scholar and filmmaker extraordinaire

Everyone at Birkbeck Institute for the Moving Image was very shocked and saddened to hear the news that Professor Thomas Elsaesser had unexpectedly passed away on December 4 while visiting China as part of his guest professorship in Beijing. Most of us involved in BIMI and the Essay Film Festival team had known Thomas for…