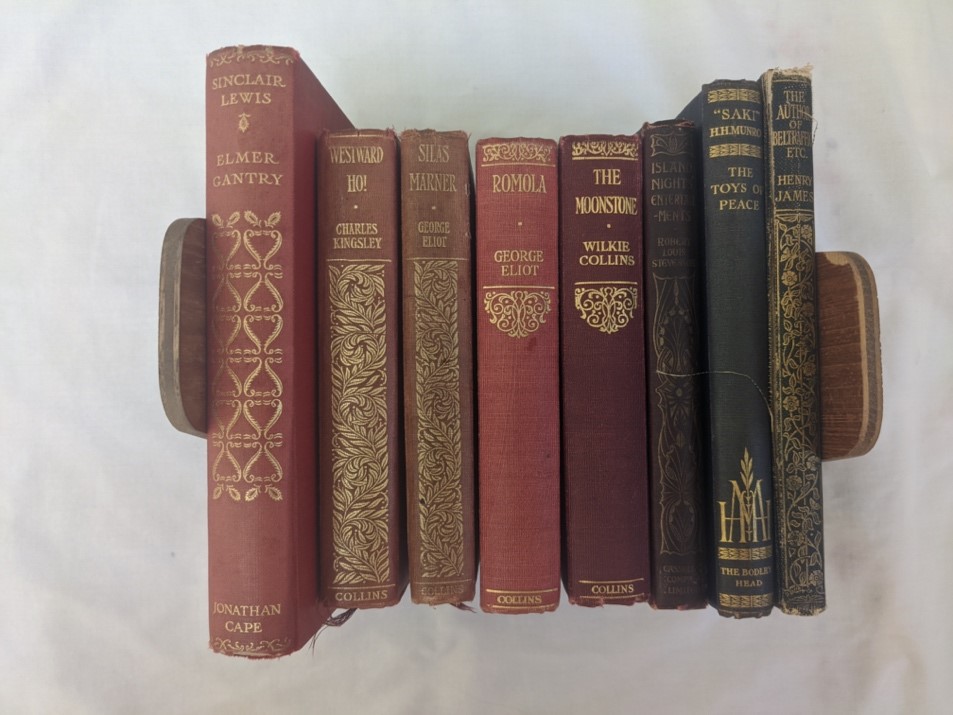 This guest blog by Birkbeck MA Victorian Studies student Imogen Grubin discusses her collection of early twentieth-century editions of Victorian literature. Imogen was a finalist for this year’s Anthony Davis Book Collecting Prize, organised by UCL Special Collections. To our delight, several Birkbeck students submitted entries for the prize, and we are happy to be able to feature Imogen’s runner-up entry and to have her share her thoughts on book collecting with the readers of Bookish.

I have been collecting books for a while, but never considered myself a ‘collector’, or even that my books could be called a collection. When I saw the Anthony Davis Book Collecting Prize hosted by UCL, however, I started looking at my books in a new way and realised that some of them told an interesting story about publishers in the early twentieth century. Even though they were all cheap and have never been considered rare, they actually show a lot about reading habits and publishers’ traditions.

The collection I put together for the Prize consists of mostly Victorian novels published in the twentieth century: The Moonstone by Wilkie Collins, Romola and Silas Marner by George Eliot, Westward Ho! by Charles Kingsley, Elmer Gantry by Sinclair Lewis, and three collections of short stories: The Toys of Peace and Other Papers by Saki (pen name of H. H. Munro), The Author of Beltraffio, The Middle Years, Greville Fane and Other Tales by Henry James and Island Nights’ Entertainments by Robert Louis Stevenson.

I bought these for no more than £3 each, partly because, for me, reading an old novel in an old book adds to the charm of the story being told. The mystery of where they were before, and sometimes of when they were published, adds to my enjoyment.

The first four books, by Collins, Eliot and Kingsley, were published as part of the Collins Clear-Type Press, cheap reprints of popular novels. Probably because they were cheap editions, they have no date of publication in them, although similar editions online most commonly put them between 1910 and 1920, with some as early as 1902 or as late as 1960. They are similar in colour and size but do differ slightly. Romola and The Moonstone have a decorative pattern directly above and below the novel’s title and author on the spine whilst Westward Ho! and Silas Marner have a decorative leaf pattern all the way down the spine and the author’s autograph on the front cover.

After collecting these, I started to look for books from other publishers around the same period to see how they compared or differed. Elmer Gantry, published in 1930, is the book most like the Collins editions. It is the same shade of red as the Collins books, has Sinclair Lewis’s signature on the cover and has a decoration all the way down the spine, although not of leaves, but is a slightly larger size. It was published as part of a ‘Collected Edition’, so may have been purposefully adopting similar traditions to the Collins Clear-Type Press to try and appeal to a certain readership. It was published by Jonathan Cape, a London publisher and one of the first British publishers to seek out American novels, and so may have been trying to appear more ‘English’.

The other three books differ greatly. The collection of Saki stories is a blue volume with a decorated spine and the author’s signature on the front. The spine, however, lists the author both as Saki and H. H. Munro, making it appear more formal and perhaps marking it as more expensive. Both Island Night’s Entertainment and the collection of Henry James’s stories have their titles rather than their authors’ signatures embossed on the front covers, possibly signifying greater expense at the time of publication.

I collected these books because I was interested in how different publishers tried to make their books stand out or fit in. I find it wonderful that even cheap editions were made to look beautiful. I bought them because I wanted to read them, but in doing so began, unknowingly, to build a collection. Competing for the prize made me realise that any group of books can be a collection, and that anyone can be a collector just from buying the books that interest you.