Joseph Brooker on America after the Fall: Painting in the 1930s at the  Royal Academy of Arts

The Royal Academy of Arts’ exhibition of American paintings only occupies three large rooms, and even looking closely at much of the work I saw it all in 45 minutes. But it doesn’t lack substance. The titular ‘fall’ is the Wall Street Crash of 1929; the decade we see is that of the Great Depression. But that doesn’t especially manifest here; only one or two pictures show anything like Dust Bowl poverty. Nonetheless, the paintings selected almost all represent some kind of social or historical content, and can be taken to represent some aspect of national life – grouped under headings like New York, Industrial Life and Looking to the Past. A corollary is that most of the paintings are figurative: they tend to show people, places, events, sometimes with recognizable names and locations. Abstraction only enters at the end, and these last paintings are less interesting than what precedes them: a range of strongly representational pictures that are also highly stylized. The human figures here are rarely photographic, usually artistically expressive: sometimes caricatured, warped, exaggerated. 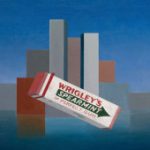 In New York, at the very start, Charles Green Shaw poses a giant stick of Wrigley’s gum in front of skyscraper blocks like floating on water, and invents Pop Art 20 years early. Next to this, Aaron Douglas’s Aspiration depicts African Americans yearning for social improvement in a big mural reminiscent of the Works Programme Administration artistic uplift sponsored by the New Deal. A circle with a star emerges through them, like Captain America’s shield (which would emerge five years later in 1941). Stuart Davis’s New York – Paris No. 3 shows items of street furniture and lettering isolated, brightly coloured, floating against vanilla background. The exhibition is vivid and fresh, and these are just the first three paintings.

William H. Johnson draws a dandy African American couple in Harlem. Paul Cadmus’s The Fleet’s In! shows shore leave with the garishness of Beryl Cook. Reginald Marsh’s paintings In Fourteenth Street and Twenty Cent Movie both sketch gauzey, smoggy grey backgrounds, against which some figures stand out in colour. Ladies of fashion shop for bargains, a group gossips in a corner, clothes are displayed in a shop window. The 20-cent movies include Dangerous Curves, Stripped Bare, Joys of the Flesh. Adjacent to this is Edward Hopper’s New York Movie (1939), in which a blonde usherette stands aloof from the screening. Nothing I could say about this could better the film writer David Thomson’s meditation on it in The Whole Equation (2005), which convinced me that it’s one of Hopper’s greatest paintings. Across from it is the show’s other Hopper: Gas (1940). Green forests and orange scrub grass surround a lonely petrol station as evening comes down. Warm light pours from the station’s doorway over the forecourt where an attendant tinkers with the red pumps. A distinction of the picture is its suggestion of narrative time, of being a moment with other moments leading to it, and others to come, that we’ll never see. Marsh’s busy In Fourteenth Street doesn’t suggest this in the way Hopper’s quiet Gas does. Edward Hopper is now such a familiar brand that he might seem second-hand to many viewers. But these two paintings both strike me as among his richest, and it’s a privilege to see them in person here.

And this is still just the first room – where on another wall, we also encounter … And the Home of the Brave, an angular sketch of city life by William Carlos Williams’ associate Charles Demuth. The bottom of the painting contains white squares and planes, almost as if the work is unfinished. Water towers loom above, more fully realized: atop a building of rich red-brown, and against a sky of differing tones of blue scored by black lines. The effect is flat, like an architect’s drawing, yet the painting also displays perspective, with a wall running away into the distance to the right. Beside Demuth’s picture is Charles Sheeler’s American Landscape: an industrial dock served by a little train, a smokestack, a great black crane, reflected in a placid canal. The representation seems densely attentive to reality, yet again, like Demuth’s, flat, simplified, stylized. Perhaps it’s the sense of mechanical power and potential pollution that also gives it a hint of menace.

In the second room Sheeler paints a Shaker chair and dense floor patterns in Home Sweet Home. Morris Kantor’s Haunted House is an uncanny scene: a colonial house with a historic portrait on the wall, haunted by a dark wraith. As we explore regional country life, Alexandre Hogue’s Erosion #2: Mother Earth Stripped Bare offers a bizarre conflation of land and body, a field like a prostrate woman. This could be a sort of American Gothic – but the painting of that name hangs on a nearby wall. It famously appears to depict a farmer and his wife, their skin carefully rendered but their bodies and faces seemingly stretched vertically, along the lines of the man’s rake. The exhibition’s note states that the painting is ‘full of longing for the past’. That’s news to me: I am used to seeing this picture deployed to emblematize something spooky about ordinary America. The title might suggest as much, pointing to the unease of ‘Southern Gothic’ in literature of a similar period. But perhaps it only refers to the windows behind the couple.

The question of how to perceive the painting is complicated further by several other works by the same artist, Grant Wood, hanging nearby. These other paintings look different. They are not close-up studies but wider landscapes. A 1931 picture shows Paul Revere’s revolutionary ride, from a remarkable high perspective that would scarcely have been available in 1775. People emerge from houses in white nightclothes. Grey cliffs and green woods swoop away beyond the hamlet. Further back down the road are the lights of houses already awoken. In other paintings also, Wood paints undulating fields and hills, soft like illustrations in a children’s book, slightly reminding me of England’s Eric Ravilious. In Young Corn the cornfield slopes vertiginously away at the foot of the painting. Then in the third room Wood appears yet again, with Death on the Ridge Road: an advancing red truck powers over a hill while cars approach. Death doesn’t seem to have happened yet, but is pessimistically foretold by the title. In the background a storm hangs in the sky.

In the last room we see a Georgia O’Keeffe cow skull, glazey shades of white. Philip Guston’s Bombardment is a circle of garishly spinning victims as war approaches. O. Louis Guglielmi’s Mental Geography joins an unconvincing vogue for Daliesque surrealism, but still draws the eye as it shows the Brooklyn Bridge collapsing. As abstraction arrives, Arthur Dove tries to put Louis Armstrong’s jazz into pictorial form. These last paintings are less satisfactory, but that reflects the blazing interest of the exhibition’s start.