Andy Smith’s solo performances and collaborative work with theatre-maker Tim Crouch aim to explore the ideas around what theater is, how it works and why we make theatre now. The desire to challenge the engrained ways of defining and making theatre has emerged from the frustration both artists have experienced when their work has been identified as not being proper theatre.

Smith’s talk was almost a reflection of his performance practice in which he sculpts the work around the experience of togetherness in a shared space, and of theatre doing more with less. The idea of dematerialised theatre is based on the principles of removal, reduction and restriction of anything that is not needed in performance, and aims to allow theatre to happen at a pure level, inside and with its audience. The minimalist form of text and performance in Smith’s work challenges the focus of proper theatre on authenticity and representational performance that aims to generate theatrical transformation predominantly on stage through realistic characterisation, plot, language, acting and set design.

To demonstrate what he meant by theatre happening inside and through its audience without the need for figurative representation, Smith referred to Crouch’s An Oak Tree (2005) which he co-directed with Crouch and Karl James. Inspired by Michael Craig-Martin’s 1973 conceptual artwork An Oak Tree, which involves a glass of water on a glass shelf identified as an oak tree to question the essence and experience of art, this piece questions the essence of theatre. 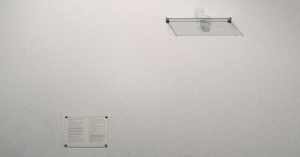 In his talk Smith used the Q&A text displayed next to Craig-Martin’s piece which presents the artist’s explanation of how he changed a glass of water into an oak tree. At this point Smith’s talk became joyfully interactive and intellectually revelatory, drawing our attention to what we audiences do to a performance. Smith asked an audience member to read the artist’s responses while he asked the questions:

Q. To begin with, could you describe this work?

A. Yes, of course. What I’ve done is change a glass of water into a full-grown oak tree without altering the accidents of the glass of water.

Q. Do you mean that the glass of water is a symbol of an oak tree?

A. No. It’s not a symbol. I’ve changed the physical substance of the glass of water into that of an oak tree.

A. Of course it does. I didn’t change its appearance. But it’s not a glass of water, it’s an oak tree.

A. No. With the emperor’s new clothes people claimed to see something that wasn’t there because they felt they should. I would be very surprised if anyone told me they saw an oak tree.

Q. To begin with, could you describe this work?

A. Yes, of course. What I’ve done is change Kelly into a full-grown Miss Julie without altering the accidents of Kelly.

Q. Do you mean that Kelly is a symbol of Miss Julie

A. No. It’s not a symbol. I’ve changed the physical substance of Kelly into that of Miss Julie.

A.Of course it does. I didn’t change its appearance. But it’s not Kelly, it’s Miss Julie.

[…] Q. Isn’t this just a case of the emperor’s new clothes

A. No. With the emperor’s new clothes people claimed to see something that wasn’t there because they felt they should. I would be very surprised if anyone told me they saw Miss Julie. 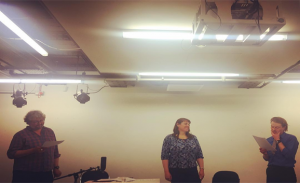 This simple yet profound experiment presented the mechanics of theatrical (artistic) transformation that is based on the mutual agreement between maker/performer and audience about the artist’s capacity to speak and suggest and the audience’s willing acceptance of and belief in the artist’s words.

This idea of theatrical transformation is clearly not a novel notion in theatre practice and scholarship. However, it is an essence that has been overshadowed by conventional Western theatre traditions which have generated the idea of proper theatre and left the unfitting forms outside theatre’s large umbrella. In response, Smith’s dematerialised theatre shows and does less on stage in order to practise the essence of theatre by allowing its audience to engender and experience the theatrical transformation through their critical imagination. This act of author-ising the audience is not a disingenuous act of participatory performance where audience involvement might be based on strictly regulated interaction with the spectators. On the contrary, it is a genuine invitation to the audience to become integral to the performance, experience the theatre event on a pure level through their imagination and to engage with the possibilities theatre can offer particularly in our mediatised culture where the reality of the virtual outdoes the virtual reality.

While emphasising the central role of the audience in theatre Smith underlined his understanding of the theatre event as an act of getting together, of our collectively agreed presence as a group. This idea is fundamental to Smith’s work and is always accentuated in his performances through the repeated use of certain words such as ‘gather, we, together, somewhere like this’. The sense of togetherness that we all have agreed to be a part of suggests a deeply political element in Smith’s vision of theatre. Smith invited us to collectively think about what theatre was as well as hinting towards its democratic and revolutionary foundations. In his works and in this specific talk Smith’s gestures towards theatre as a place for gathering suggest that theatre’s possibilities lie in the act of coming together and collectively thinking towards social and political change particularly at a time where social solidarity is needed more than ever. This act feels like a hopeful gesture in the challenging times we live in, something I experienced in his recent piece Summit which I will talk about in my next blog piece.