Martin Eve on The White Devil at the Wanamaker Playhouse

The White Devil is, by many standards of judgement, a pretty terrible play. It features a large cast of characters who appear and disappear extremely quickly, making it very difficult to follow. It also conveys much of its own action – apart from the violence – through reported speech and dialogue. It is deeply misogynistic (a good description of the play might read: everyone is killed and there’s quite a lot of slut-shaming before then). It is also absurd in its quantity of tragic death. There isn’t really a lot going for it, to be honest, and its initial poor reception was blamed by its author, John Webster (c. 1580–c. 1634), on the stupidity of his audience. What was that about a good workman never blaming his tools?

That said, the production that I saw this week at the Sam Wanamaker Playhouse – an adjoining theatre to the more famous Shakespeare’s Globe – did a good job of making some sense of the mess. Considering the complexity of the work, this is no mean feat. 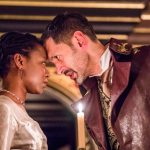 The White Devil and the Sam Wanamaker Theatre

However, there is something about the complexity and carnage of Jacobean revenge tragedies that makes them almost self parodies. When Thomas Pynchon wrote his satire of Jacobean revenge drama in The Crying of Lot 49 [1966] – the “Courier’s Tragedy” – it seemed that the over-writing, comedic play, and confusion were actually just mimesis. In short, it’s difficult to make this stuff up.

Yet the Wanamaker production plays for laughs. Flamineo is guised as a sort of Russell Brand figure; a ham comic, grossly overdone and with lecherous intent, who gaily swings through the play before meeting a sticky end. On the other hand, Cardinal (and later Pope) Monticelso was played with subtle understatement and lurking menace. (As though the anti-woman stance wasn’t enough, The White Devil is also saturated with anti-Catholic sentiment and racism.)

Perhaps, though, this disjunct between the way the characters were played was what yielded the strangest effect in the Wanamaker production. On the one hand, the comedy was overdone and the concluding bloodbath provoked some giggles. On the other, there was a menace and naturalism to the deaths – and to some characters – that made them shocking. In this way, then, the production mirrored the messiness of the play’s form, which is a perhaps apt paradox, if not the most dramatically satisfying.

Finally, the many meta-theatrical moments in the play were done well here. The audience was conscripted as a judge and jury while also being mocked for our inadequate knowledge of Latin. At the same time, the pedantry of legal language was held up for ridicule. The production certainly did a good job of getting the most sense from lines that, to be frank, can appear little more than (poor) comedy; for here they drew the audience in to a complicity with what can only be described as a thoroughly unpleasant raft of characters.