Joseph Brooker on A Taste of Honey

JO: I wonder if we ever catch up with ourselves?

JO: A proper Ted! And me, I’m contemporary.

JO: I really am, aren’t I? I really do live at the same time as myself, don’t I?

Aged nineteen, I made a concerted reading and viewing of several of the novels and films of the British New Wave era. From a university bookstall I picked up copies of John Braine’s Room at the Top (an orange and white Penguin from 1959), Alan Sillitoe’s Saturday Night and Sunday Morning (a lurid Great Pan from 1960); from the window of a shop in the city, Keith Waterhouse’s Billy Liar (1959, but a 1970s edition with the Woodbines cigarette packet cover). And in the great concrete block of the university library I hid away on overcast autumnal days with padded headphones and clunking VHS machines showing the films of all the above, and Tony Richardson’s 1961 adaptation of Shelagh Delaney’s 1958 play A Taste of Honey.

A Taste of Honey is typical of these fictions of the time: depicting working-class lives in Northern backstreets, frank about sexual activity, bringing Northern dialect to the centre of the British arts. (It even uses the same obscure rock & roll record that every other New Wave film uses in its fairground sequence, a fact that bemused me in my late teens.) Then again, it’s also very atypical: written by a woman of just nineteen, centred on a girl young enough to be just leaving school, making much of her semi-detached relations with her mother. If the black-white relationship which leaves Jo pregnant is one issue little seen in other contemporary works, what’s even more distinctive is the prominence of a character, Geof, who is gay or perhaps bisexual. These features make Delaney’s debut seem proleptic, still strikingly modern, in a way that many works of its time no longer do.

A screening of the film in 35mm print offered an opportunity to see it again. The feminist film group Bird’s Eye View staged a Q&A afterwards featuring the author’s daughter Charlotte and, still more remarkably to me, Rita Tushingham, who played Jo when she herself was nineteen. Their enthusiasm for the work was undimmed; they had no weariness in celebrating it in public once more. They emphasised that it had been distinctive in centring on a mother-daughter relationship in a working-class milieu. 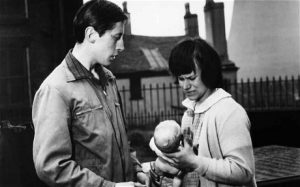 A Taste of Honey (1961) [Photo by Courtesy Everett Collection/REX]

The screening left me realising that I may not have watched the film properly since I was an undergraduate. I was surprised at how good it was. That’s partly because, though you might vaguely think this film is considered a classic, critical opinion has not always been favourable. In my old Time Out film guide, Geoff Andrew calls it ‘a perfect example of how the “New British Cinema” of the late ‘50s and early ‘60s has dated and become almost unwatchable’, ‘a drab, voyeuristic celebration of ordinariness and poverty’ whose ‘shallow reliance on clichés reeks of complacency’. David Thomson, cinema’s senior scribe since Pauline Kael, calls Tony Richardson ‘a wretched film director’. His New Wave works, writes Thomson, ‘are all abject, but I still feel provoked by the mistreatment of some of the original authors’ like Delaney: ‘Richardson tacked a literal-minded realism on to their rhetoric’.

This doesn’t sound like the film I saw at all. What impressed me was not so much the basic content of the play but how successfully it had been made into a film; how much had been added, by Richardson as director and also by Delaney herself in writing the screenplay. A whole sequence in Blackpool; another on the moors. How did Jo and Geof meet? The play’s second Act shows them entering her tenement after going to the fair, and she mentions working in a shoe shop. More vividly, the film shows her in the shop, and his entrance in search of a pair of ‘Italian casuals’ – both characters, though poor, thus sharing a relation to an emerging youth fashion. Jo’s relationship with her sailor boy is given new scale by the actual ship on which he works; as he leaves, he stands in the distance on a moving mechanical dock. She then looks down from a platform on the canal as his boat sails: on deck in his chef’s hat, he peels potatoes, oblivious to her gaze. The ship canal is typical of the film’s powerful use of space: angles, vistas, girders, characters against landscape, all in beautiful monochrome. And I had quite forgotten the opening sequence, in which Jo and her mother journey across Manchester to their new place in Salford: under the theme song, ‘The Big Ship Sails’, sung by children, the camera swings past a series of statues in the centre of the city.

As the film progressed, what it was actually most fundamentally about seemed in flux. Teenage angst and isolation (the opening scene shows Jo failing to play netball in her school playground; only from the Q&A did I know that Shelagh Delaney was somewhere in the background herself)? Salty Northern banter with Dora Bryan as the seasoned mother Helen? Marriage, which Helen manages for a second time, Jo fantasises about with her sailor, and Geof, whatever his sexual history, pines for with Jo? Race, as the baby’s parentage causes alarm? Or, in the last third, simply pregnancy itself, with Geof’s visit to a clinic (part of an NHS less than 15 years old, whose 70th anniversary has now just been marked), Helen’s offer to share her experience, and Jo’s despairing declaration that she doesn’t want to be a mother or a woman? I’ve always thought I loved A Taste of Honey, and the images of the film have always been its images for me; but I had lost sight of just how rich it is.

One other thing I had never properly known about this film. On their debut LP Please Please Me (1963), The Beatles recorded ‘A Taste of Honey’, a rather melodramatic song written by Bobby Scott and Ric Marlow. The same period, but just a coincidence? No: the Beatles reference book Revolution in the Head says the track is directly inspired by the film, which is described as its ‘theme-tune’. Well, the Internet Movie Database doesn’t list it as part of the film’s soundtrack: I think the curious truth is that it was written as an instrumental for the 1960 Broadway production of the play, then given some words for commercial release in its own right. Its connection to the story, let alone the film, is slight. But Ian Macdonald, the most accessible Beatles archivist, insists: ‘Starring Liverpudlian actress Rita Tushingham, whose wide-eyed, plain-spoken persona briefly became a fixture of the UK screen industry, the film’s wry vision of sentimental self-sufficiency appealed strongly to [Paul] McCartney’. Actually, sentimentality is one thing that this film never indulges in. But I’m happy to endorse McCartney’s taste on this. And there’s more. During the film I’d noticed a character casually remarking ‘Your mother should know’, and wondered for a moment if it could be the source of the title of a quite unrelated Beatles song on Magical Mystery Tour. It’s remarkable to learn that it was.