A puppet hangs in the air by chains. Its body is routinely hiked up and dropped with increasing degrees of force. It’s a puppet but it’s a boy puppet, or even the kind of boy that might have a creepy-cute puppet such as this. And when its blue-screen eyes flare and spin, this puppet, which is also a boy, is suddenly very much a machine; a machine like the apparatus that raises and lowers him. Over the course of this uncanny installation by US artist Jordan Wolfson at Tate Tanks, the edges of bodies and things, humans and machines, all start to blur and disassemble, though the object stays resolutely intact.

In the opening sequence, the object is lifted high and held. Framed in suspension, it’s an image of puppeteering but also crucifixion. We are in a theatre or a boxing ring, a gallery or a torture chamber. Staring right at us, thanks to facial recognition technology, the animatronic starts to speak calmly, though in obscure phrases, with Wolfson’s own recorded voice: ‘Two to kill you, three to hold you, four to bleed you, five to touch you…. Spit. Earth.’ Pause – and it drops to the ground in a metal puddle. A sudden burst of Percy Sledge singing When a Man Loves a Woman (1966) before the object crashes to the floor again.

The figure evokes a range of cartoonish paraphernalia and nostalgic imagery – for me Pinocchio and Chucky first came to mind. In developing the work, Wolfson seemingly drew on a number of US references, from illustrations of Huckleberry Finn, to Howdy-Doody, a cowboy puppet from a children’s TV show in the 1940s and 50s, to Alfred E. Neuman, the mascot of the satirical magazine Mad. 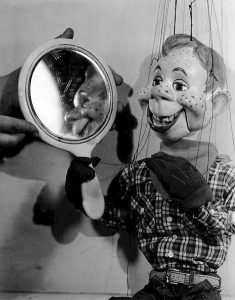 Howdy Doody created by E. Roger Muir [Image is in the Public Domain]

Aside from these parallels, some commentators have compared the puppet’s posturing to the photos which emerged from Abu Ghraib in 2004. Even so, and despite the reference to colour in the work’s title, and Sledge’s soulful punctuation, it’s hard to see that this project is interested in racially targeted violence with any great focus.

There are echoes, too, of Beckett’s Catastrophe (1982), in which a director trying to perfect a scene subjects his performer to casual violence. The same idea ricochets throughout this piece: if violence produces art, then aren’t we all implicated in what’s happening? But it would be a mistake to see the object as just the subject of violence here. Despite a few scuffs, it’s as resilient as the scene is relentless, and it fearlessly looks and talks back. Who is punishing whom or what with this enactment?

And what does a man do when he loves a woman? We don’t get to hear the full refrain here, instead the object plummets to the ground. Perhaps what a man does when he loves a woman is less important than the pleasure he gets from violent theatrics, in producing culture, in producing himself. But given that the lyric is cut just before the word ‘woman’ would soar, this installation is curiously haunted by women, though their place in the aggressive structure remains unclear.

I stayed with the work for about 45 minutes, circling it from different angles. Towards the end of my time, as the object was once again hauled into the air, and plunged in violent succession, an elderly woman beckoned from her wheelchair, her finger switching from me to the exit. She was crying, visibly upset, and appeared to indicate that I take her from the room. This seemed like such an unlikely request to act on. Besides, she was with a younger male companion, possibly her son or carer, who was too busy recording the sequence on his iphone to notice her distress just yet. Yes, it was as riveting and as harrowing as this.

Or maybe he didn’t care. Or maybe I misread the scene. There’s more than one way to be a puppet, and more to be a machine.