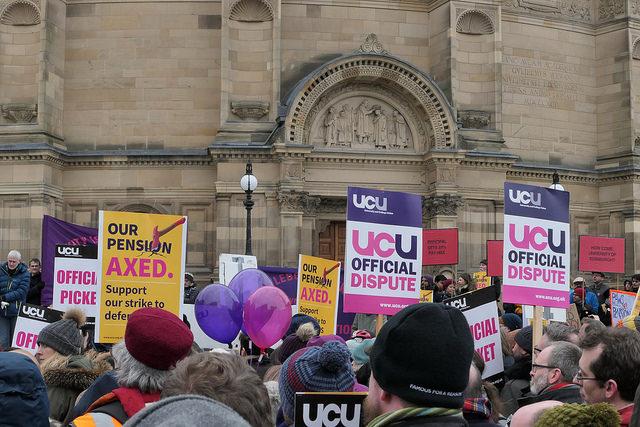 Over the past ten days a lot has changed in the Universities Superannuation Scheme (USS) pensions dispute that is currently disrupting higher education in the UK. We know a lot more than we did before, thanks in large part to the work of individual USS members and the Universities and College Union (UCU), about how badly our pension fund has been governed. A lot of these gains have been made on social media, and especially Twitter.

New revelations and favourable press coverage have caught university Vice Chancellors and Universities UK, the body which represents them, by surprise. One interesting example of this is at the University of St Andrews. On the eve of the dispute an email was sent to all staff at the university, signed by the Principal and Vice Chancellor, Sally Mapstone, and her senior management team. Parts of this email were widely shared on Twitter in the context of discussion about what universities were doing to punish their staff for exercising their legal right to withdraw their labour. It was read, then, in relation to other threats issued by a number of universities, including the University of St Andrews, to dock staff pay by 100% for action short of a strike, that is for working to contract outside of strike action.

In her email Professor Mapstone, who is also on the board of Universities UK, lays out the old view, the view that there is no way around the, we now know flawed and shoddy, pension valuation and consultation conducted by USS. She went on to indicate that, should the proposals put forward by UCU come into force, the University of St Andrews would be poorer. This was how she put it in her email to staff:

We have clarified our promotions procedures, and established new routes through them. We have introduced a pilot mentoring scheme for mid-career and senior academic women. We have run the first professorial merit exercise in five years. We are pursuing plans to provide this University’s first dedicated housing development for early and mid-career staff, and have opened a new nursery for the children of staff and students. We have established inclusivity and diversity as a University priority, and we have set up a fund to encourage research projects in these areas.

In all of the cases where this has involved resource we have budgeted prudently to be able to do this. Were the UCU proposal to have been adopted, few of these kinds of proposals would go on being practicable.

I have emboldened the last sentence, because it’s particularly interesting. It wasn’t necessary; it could have been left out, but it wasn’t. It isn’t a very good sentence, especially considering that the people who wrote it are on very high performance-related salaries. Because language matters, let’s take a quick close look.

‘Were’ sets up a conditional tense construction which suggests that the statement is made from a point at which the future is not known (if…then).However, the phrase ‘to have been adopted’ is different. This is an example of the present perfect tense and it denotes things that have happened in an unspecified time before now. So this part of the sentence places the speaker after the point at which the UCU proposals might have been adopted but weren’t. It assumes, then, that the dispute will not be settled in the way that UCU proposes; equality and diversity measures are possibly here (this is a generous reading) held out as consolations.

I recommend to my students that they avoid tense tangles like this in their writing. Either use the simple conditional (‘if the UCU proposals are adopted, then few of these diversity and equality initiatives will be practicable’), or properly articulate the idea that the UCU action will fail, saying  something like: ‘(I’m sorry that) you are soon likely to be disappointed by losing out in the coming pensions dispute. Be assured that we have put in train other measures to protect workplace rights’. I put the first phrase here in brackets as optional.

That the statement offered a trade – staff should not strike if they want to have equality and diversity measures – was noticed and commented on by the local branch of the UCU in their response to the statement, and many individuals, too, within St Andrews and without.

Reading this statement made me angry because, quite apart from the fact that equality and diversity are good in and of themselves, it betrays a lack of understanding that many of these nugatory equality and diversity initiatives are cost neutral (like the mentoring scheme), or more or less self-funding (like the nursery), or actually bring money into the university, for example, by enabling staff to work more effectively, or through recognition in the Research Excellence Framework (which considers equality and diversity as one of its measures). I immediately thought of colleagues at St Andrews and how demoralised they must feel reading this. I particularly thought about the people who work in the university nursery, offering a valuable and financially self-sustaining service who now learn that their job might be threatened as part of a punishment for UCU strike action.

So I decided to set up a petition. I did it at around midnight on a Saturday night and by Monday morning it had 1800 signatories. One colleague at St Andrews predicted in conversation with me on Twitter on Sunday that there would be an apology for the gaff about the equalities/pension trade. What came, though, was no apology.

On Monday morning Professor Mapstone did send a new email to staff clarifying her position. In that new email Professor Mapstone said that she had decided against the punitive docking of staff pay for action short of a strike. This was a significant climb-down. It wasn’t, she said, commensurate with the values of the University of St Andrews. This is great news and throws into sharp relief the values of other institutions who continue with this punitive docking policy.

On the issue about equality and diversity, however, she wrote this:

…a statement made in my message of 20 February to the community has been presented as having an unfair or even sinister meaning. I have spent my entire career working for diversity, equality, and access. I would never set up a ‘trade’ between employer pensions contributions and employees’ workplace rights. What I wanted to do was be honest and open with you. If a solution is reached in this new phase of negotiations that requires the University to make a larger contribution to pensions, of course we shall find a way to do so. As a community, we would have to determine our priorities in those circumstances. This university has never been opposed to the principle of paying more to safeguard our staff’s futures and I will always be guided by my precepts of fairness, excellence and inclusivity.

I find this even more astonishing than the statement in the first email. First of all it suggests that the problem here is not in what was said but, rather, in the way that it has been ‘presented’. The new statement, then, blames others for casting aspersions; it doesn’t take responsibility for any loss of rhetorical control.

The new statement does nothing to convince me that I should take my petition down. As I write, it has over 2300 signatories.

One point of context here which makes all this doubly astonishing is that, at this very moment, St Andrews’ application for an Athena Swan bronze award is under review. Athena Swan is a charter mark initiative aimed at improving gender equality in higher education. Universities want these awards not only because, in the corporate speak which prevails currently, it’s good for their brand image, but also because there is a financial incentive. An application to Athena Swan takes a lot of work; they are hard to win. We might think about the staff who worked to put that application together, when we think about the damage that has been done here.

So, let’s imagine that I want to write a sentence about the possible futures beyond St Andrews’ Athena Swan review. Because the review is on-going, I need to think a bit about tense construction.

I could employ the conditional tense and say: ‘If St Andrews gain that award, then the credibility of the whole Athena Swan programme will be thrown into doubt’.

Or, alternatively, I could say: ‘I’m sorry that staff at St Andrews have likely had their hard work ruined by their Vice Chancellor. But we can be reassured by the fact that there are staff at St Andrews committed to and working for gender equality’.

I have learned a huge amount during this dispute about university governance as well as the mis-governance of our pension fund. I have also learned that the gains that have been made in relation to equality and diversity in higher education are more fragile than I thought. There will be an ‘after this dispute’ moment, when it will be easier to manage our tense constructions. In that new world, some of us will be able to look back and say my institution did well, and some of us, sadly, won’t. Things will have to change in that new world, whatever the outcome in relation to our pensions; but it makes no sense, financial or otherwise, to withdraw from creating equal and diverse working environments. 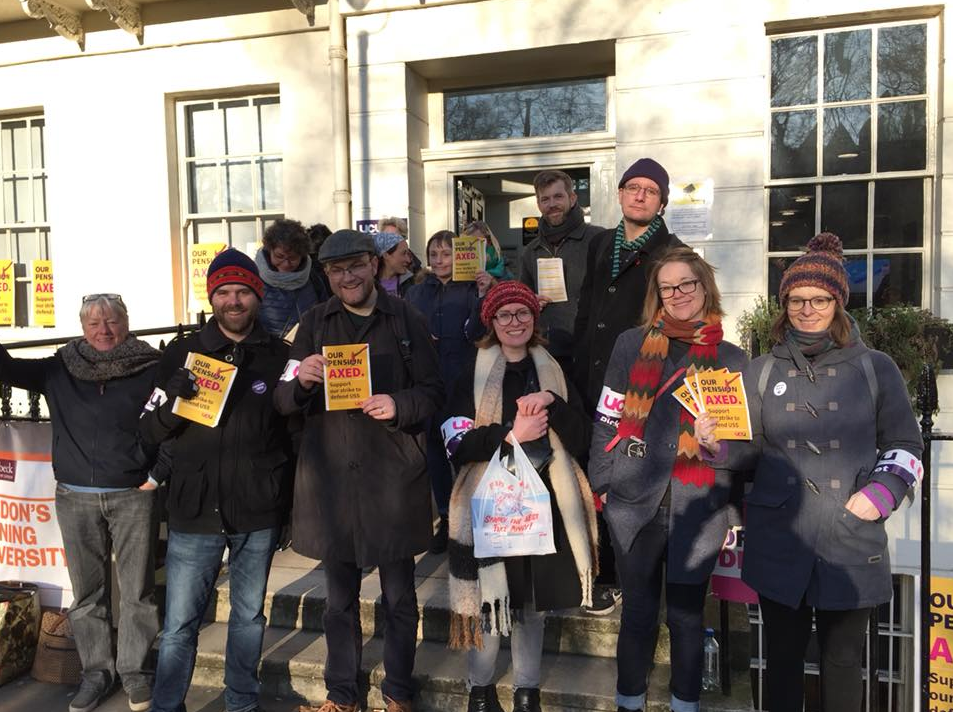