Isabel Davis on ‘Paradise Regained’, episode 2 of ‘Art, Passion & Power: The Story of the Royal Collection’, presented by Andrew Graham-Dixon. 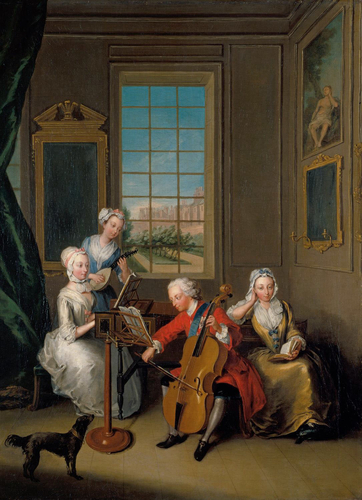 This week I caught up on Andrew Graham-Dixon’s series ‘Art, Passion & Power: The Story of the Royal Collection’, part of the BBC’s Royal Collection Series. I got as far as the second episode, Paradise Regained, which tells the story of the royal art collection from the Restoration of Charles II in 1660 to the succession of George IV in 1820.

The title of this episode, Paradise Regained, borrows, of course, from John Milton’s poem of the same name; a provocative title indeed! As everyone knows, Milton was a republican firebrand who was lucky to have died in his own bed, somehow surviving arrest and imprisonment after the Restoration. As secretary for foreign tongues during the Interregnum, Milton was not solely known as a poet in his own time: he was also a statesman, an officer of the Cromwellian regime. What is more, in 1650, on taking up that office, he was given a warrant to choose hangings from the Royal Collection to furnish his Whitehall lodgings.[1]

I was keen, then, to see how Milton, one of the greatest critics of Stuart aesthetics, would be invoked in ‘Art, Passion & Power’. I was waiting for the Miltonic eye-view of the Restoration Royal Collection, a perspective which never came.

Milton was mentioned briefly: in discussion of ‘The Music Party’ (1733), a painting by Philippe Mercier (1689-1760). The painting depicts Frederick, Prince of Wales, and his three sisters. Frederick is playing the cello, Princess Anne the harpsicord, and Princess Caroline the Mandora; Princess Amelia (1711-86), meanwhile, reads from a volume of Milton’s works.

That was it. Beyond mention of the book in Mercier’s painting, the programme did nothing more to think about Milton, borrowing the title, Paradise Regained, but never explaining, or perhaps understanding, why.

I wonder which of Milton’s works we are to imagine Amelia is reading when we look at Mercier’s painting. Because the painting represents a scene of pleasure and leisure, it is likely to be English poetry, rather than Latin prose. Amelia is probably not, then, reading one of the two of Milton’s works publicly burned in 1660: Eikonoklastes and Pro populo Anglicano defensio. It may be that we are expected to think of Paradise Lost, a poem which Amelia’s mother, Queen Caroline (1683-1737) liked enough to encourage the royal librarian, Richard Bentley, to edit and print in 1732.[2] It is much less likely that our minds are supposed to turn to Paradise Regained. For all that the Hanoverians represented a departure from Stuart kingship, their reading of Milton as an expression of their English Protestant credentials, they were still royalty and no doubt disinclined to appreciate Milton’s more demonstrably republican work.

Paradise Regained was first printed in 1671 with another, dramatic work: Samson Agonistes. Together, they offer angry and unbowed responses to the problem of failed revolution. Samson Agonistes, tells the story of the captive and blind Samson brought to the temple of Dagon in Gaza on a Philistine feast day. His displays of strength are to be part of the day’s celebrations: an exhibition of tamed insurgency. After performing some tricks for the crowd, Samson is tied to the pillars of the temple. Mustering and recovering his divinely-gifted and super-human strength, Samson brings down the whole temple, killing himself along with the Philistine spectators.

Paradise Regained, in contrast, meditates on non-violent resistance, telling the story of Jesus in the wilderness, by way of a sequel to Paradise Lost. Of all the episodes from the gospels, the crucifixion and resurrection, rather than the quarantine story, would have been more obvious and traditional counterpoints to the Genesis story of the Fall. By selecting the quarantine story, Milton chooses a strangely quiet and passive hero. He did so to distance his brand of heroism from that surrounding the dead king Charles I in royalist propaganda. The tract, Eikon Basilike, printed on the death of the old king in 1649, had borrowed (even for an ostensibly Protestant King) from traditions of affective hagiography and christology, describing Charles as the type of Christ submitting to spectacular sacrifice. In conscious resistance, Milton’s Paradise Regained depicts his Christ as adamant but passive, and his sacrifice as temperate and un-bloody. In the final bathetic line of Milton’s poem, we learn that Jesus, after resisting Satan’s temptations, ‘to his mother’s house private returned’, rather than to a scene of spectacular violence.[3] And the anti-climax of Jesus’ victory in Paradise Regained was not only a counterblast to the martyrology surrounding the executed Charles I, but also to the triumphalist redemptive narratives that attended the Restoration of his son, Charles II.

With its appropriated title, the BBC series signals that ‘paradise’ was regained for royalty; that the Royal Collection sold off and lost in 1650 was resuscitated at Restoration. But, of course, that is very far from being the point of Milton’s 1671 poem. Milton’s title signalled that ‘paradise’ would be regained by reinstating, not the monarchy, but, rather, the republic, this time one headed by Christ. Paradise Regained issued a manifesto to those disheartened by the Restoration to wait, and to stand, a promise that patient endurance would be rewarded, and that by holding ground, Satan would fall.

For Milton, one of the ways in which Satan gained traction in the world was through royal art and culture, and particularly in its most libertine expressions. The Civil War had been fought with conventional weapons but was also a battle for aesthetics and, as Leah Marcus has shown, popular entertainment and festivals.[4] In the popular understanding of history, of which ‘Art, Passion & Power’ is part of a piece, Restoration court art, in all its baroque grandiloquence, is challenged only by a negative aesthetic, by a ban; the popular media will tell you that English republicanism banned Christmas, banned art, banned fun. That narrative doesn’t quite account for the poetry of John Milton, nor register his real challenge to the politics of cavalier and restoration court aesthetics. In #MeToo times there ought to be a way of understanding Milton’s frustration with compulsory libertinism. That is something that Graham-Dixon is unable to do, for example creepily assessing which of the Hampton Court portraits of Charles II’s mistresses have ‘bedroom eyes’. That Milton wrote in verse is one reminder that his opposition to Stuart entitlement was not about banning or ending art, but of trying out an alternative: a kind of art which wasn’t also rape.

The ‘Art, Passion & Power’ series, then, misappropriates Milton’s title, making the Royal Collection itself a paradise which was regained at the Restoration. Milton’s republicanism, in this version of British history, is invisible. In this history, there is no distance between Princess Amelia and the book which she reads. This account reproduces the idea of Milton which is presented in Mercier’s ‘The Music Party’: captured and disarmed as great English Protestant Literature, to be enjoyed like music, and deployed as a symbol of refinement and accomplishment in a young princess. By these means Milton’s insurgency is tamed like Samson’s. And, like the biblical strongman, he is made to demonstrate the imperium of his victorious enemies. But the borrowed title is also a parapraxis, accidentally evoking one of the most pressing opponents of monarchical aesthetics in an unthinking paean to the very art he critiques.