A certain colleague in the Department of English & Humanities frequently teases me about my love of “banging techno” – as he mischievously terms any bass-heavy contemporary electronic music to which I listen. Nevertheless, and as with most weeks, I have recently been catching up with contemporary downbeat electronic music.

Specifically, I enjoy listening to the genres known as slo-mo disco, dark disco, slow techno, and chug; all centred around the philosophy of the club night pioneered by Andrew Weatherall and Sean Johnson, A Love from Outer Space. Their manifesto: to never knowingly exceed 122 beats per minute.

I first became aware of this type of music in around 2014 when I simultaneously stumbled across Andre Bratten’s Trommer Og Bass, Rich Lane’s remake of the classic Flesh by A Split Second, Emile Strunz’s Deception, and a set of Hardway Bros’s remixes. 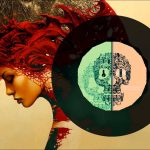 I’d been a long-standing fan of the 1990s (and recently resurgent) house-dub crossover act Leftfield  but also Fluke – a progressive house act with a dark sense of humour (there aren’t that many electric guitars, for instance, on Electric Guitar). But the term “downbeat” or even “Leftfield” conjured something different to the genres of music that most appeal to me now and don’t really capture what “slow” can mean in this context. “Downtempo”, in particular, summoned a type of light electronic music; that is, the type of music you might get as background in a hotel elevator, or in the lounge of a hotel bar. Background music that gives neither energy nor demands any attention.

More interesting to me is the low-BPM, bass-heavy music that is made by a small subcultural group with a quirkiness and interest in synthetic music production. For instance, Dark Strands’s Return of the Oscillator deliberately plays, in its title, on the central component of analogue synthesizers; the oscillator. Indeed, there’s a sort of retro feel with this synth fetish but also with much of this music that, while sounding utterly contemporary, heralds itself as a “return” of an era when electronic music dominated the airwaves.

This might explain, at least in part, why a type of “remake” culture has emerged around this group. Rich Lane is particularly good on this. In fact, even while I have been writing this post, he has just dropped a dub remix/remake  of Pop Will Eat Itself’s Touched By The Hand Of Cicciolina. Other great retro harkings from Rich include rather fine takes on Depeche Mode, the KLF, and Kelis. There is a kind of nostalgic vibe in this harking back and “returning to remake” – perhaps betraying the age demographic of listeners who tend to enjoy these – but there’s also something deeply pleasurable about the differentiated repetition of familiarity twisted into a new slo-mo, and usually pretty heavy, form.

It’s certainly not all remakes, though. Duncan Gray’s The Weak Nuclear Force is one of my favourite tracks of the past two years, especially in its Rich Lane remix form (again, the 50s retro vibe is strong with this one, particularly with its nuclear-test themed video.) Cannibal Ink also put in a track that I frequently play on Tronik Youth’s Nein Records label in 2015, Le Petit Prince, a curiously multi-layered bassey-bouncey number with a long French vocal interlude. Likewise, I still return to Iko & Gibb’s release on Duncan Gray’s Tici Taci label from that year, Tracy, which one of my friends described as “intensely druggy”; not that I would know.

I suppose, though, that if I had to narrow it down to a few classic tracks of the genre that really hit the top for me, I would give (in no particular order):

That’s a rough outline of the route by which I got to this week, musically, over the past few years. I tend to spend quite a while at weekends trawling through new releases, finding things that I enjoy and then play them to death over the next week; often a few new tracks on near-constant repeat. I find that deep, bass-driven electronic music at a low BPM gives me a huge amount of energy and, again, I attribute this to a differentiated repetition. I find myself honing in on one or more of the melody, rhythm, or bass lines on each play, almost filtering it out to exclusion of the others, then mentally re-integrating it with the remainder of the track. I can equally well listen to this music while handling admin, reading, writing, or just on its own. Occasionally, I have also been known to dance to it.

From time to time I also unwind by putting together beat-matched mix-tapes to share with like-minded friends. You can find these on my Soundcloud page: https://soundcloud.com/martin-eve/tracks.

More broadly, there are interesting questions of value and enjoyment that I can pull out from the fact that I like this type of music while, I suspect, my teasing colleague does not. The cultural studies revolution long ago rid the playing field of any pejorative sense that it was only literature/music/theatre of the “high” variety that was worthy of attention/study. But the fact that there is, at the root, little way of rationalising why “different people like different things” – as the same colleague put it – applies as much in the space of contemporary music as elsewhere. Some might argue that the music that I find most enjoyable lacks the depth or aesthetic composition of sophisticated classical takes. But that’s just fine; these are not interchangeable forms and I have always been suspicious of Adorno’s claim that contemporary (jazz) music (for his time) was a commodified instantiation of fascism. It seems to me, in fact, that such music brings people together in non-violent communities of enjoyment. I also find it pleasing that the digital space allows for the discovery of new, exciting music in a way that would have, in a previous era, have been far more localised. Artists in this space are often very generous, as well; several have sent me unauthorised remixes/demos/works in progress, a type of sharing that I find most gratifying.

One thought on “Martin Eve on Contemporary Slo-Mo Electro”