2013 saw the publication of The Word on the Street, the first collection of song lyrics by the poet Paul Muldoon. Then in 2015 came The Hollow of the Hand, the first collection of poems by songwriter PJ Harvey. Clearly Muldoon and Harvey were on similar – if opposing – trajectories, moving between words and music, music and words. It was fitting then that the two writers should be brought together for the opening event of a new literary festival, Lancaster Words, at Lancaster University (where Muldoon is a Distinguished Visiting Professor) to discuss the relationship between poetry and song.

The event was billed as ‘PJ Harvey in conversation’ and the audience strictly informed that this would not be a musical event. But as it turned out, that wasn’t entirely true. PJ Harvey set the tone for the evening with a barnstorming reading of Stephen Sondheim’s ‘There’s Something About a War’ from A Funny Thing Happened on the Way to the Forum, tapping out the beat with her foot, clicking her fingers and intoning the words in a rhythmical chant, part speech, part song, Sondheim’s words ringing out in all their savage irony:

The song, Harvey explained, was one of the inspirations behind her powerful, war-themed 2011 album Let England Shake. She kept a copy of Sondheim’s words pinned up close by while she was working on the songs that would make up the album. 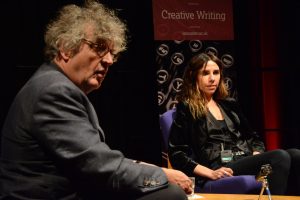 Paul Muldoon picked up on the incantatory way Harvey read – or performed – the lyrics, comparing it to Yeats’s notion of ‘chaunting’ and setting up a fascinating discussion about the interconnectedness of poetry and music, the spoken word and the sung.

Though PJ Harvey was top of the bill, this was very much a two-hander, with Muldoon and Harvey making an engaging double act: Muldoon, artfully dishevelled in battered suit and tousled hair – ‘a poetry Columbo’, as a friend in the audience had it – and Harvey effortlessly cool, carrying much of her rock star poise into the world of poetry. There was something Columbo-like in Muldoon’s interviewing style too, discursive and digressive, and often ending with a ‘One more thing’. But forensic and detailed too, as he led Harvey through a wide-ranging discussion, touching on, for instance, the use of refrain in Louis MacNeice’s poem ‘Autobiography’ (‘Come back early or never come’), reflecting on the way the meaning of the refrain shifts and changes as the poem goes on. Muldoon also read some of his own song lyrics, including his first, a collaboration with songwriter Warren Zevon, ‘My Ride’s Here’, while Harvey read her own ‘Down by the Water’ as an example of how the sparest of lyrics can create a rich and powerful song:

The nature of the relationship between poetry and song is endlessly debatable, of course, but Harvey and Muldoon arrived at an understanding of lyrics as incomplete on their own, requiring music to become fully realised, fully alive; whereas poems, as Harvey pointed out, ‘have a music of their own’. Both admitted therefore to a suspicion of the ‘art song’, where composers set existing poems to music, something Harvey said she found ‘nauseating’.

The event ended with a preview of a new poem by PJ Harvey, ‘A Forest’, which is to be the title piece of her forthcoming second collection, and which – with its images of beauty and brutality, of nature red in tooth and claw – certainly has a music of its own and needs no other music to come alive.

This was a terrific event and a great opening to an important new addition to the literary calendar.