Martin Eve on Joanna Bourke, Rape: A History from 1860 to the Present

Martin Eve on Joanna Bourke, Rape: A History from 1860 to the Present

On my birthday, at the end of May this year, a package arrived from my esteemed colleague in Birkbeck’s Department of History, Classics & Archaeology, Joanna Bourke. The timing of the package was, I believe, coincidental; it was just a kind gift without any “birthday” feel. The timing added a certain grimness to the otherwise celebratory air of the day, though, since the book that I had been given was Rape: A History from 1860 to the Present. 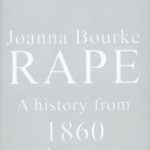 Joanna Bourke, Rape: A History from 1860 to the Present

Cheery, this book certainly is not. But important, it undoubtedly is. In fact, the experience of reading this work is, itself, worth remarking upon. Reading the volume is physically uncomfortable (and I am aware of the privileged position from which I am here speaking, having never, myself, been unfortunate enough to experience even sexual threat, let alone rape). What I mean to convey, then, is that the volume forcefully speaks some hard truths that I suspect are well-known to many people but that nonetheless continued to shake me (and Bourke admits that, in writing of the rapist and encountering so much horror, her own experience of writing was also difficult.)

Several parts of the work stood out to me. The first was the chapter on “rape myths” that opens the volume after the introduction. This section could be a go-to guide for dispelling some of the more pernicious myths. Particularly astute are the remarks on the “false accuser” scenario. As Bourke drily quips, given that 95% of rapes that are reported do not end in a conviction, a man has to be extremely unlucky to be wrongly convicted. Given how low rates of reporting are on top of this it seems impossible to argue, with even the most rudimentary statistical understanding, that there are (m)any men who go to prison wrongly for rape.

The other interesting take from the book was that, although the overwhelming majority of rape victims are women attacked by men, there are situations in which men are also victims. Like Bourke, I will not give this undue focus, but the endemic of rape in US prisons made judges question at one point whether they could legitimately sentence someone to a punishment that included sexual assault. I was also unaware, before reading, that the clinical diagnosis of “psychopath” had such a strong sexual connotation at its emergence.

Finally, Bourke’s concluding take was fascinating. Rejecting certain other feminist schools (some, curtly, out of hand: not all men are rapists, but most rapists are men), Bourke eventually situates the rapist within various discourse constructions of masculinity, thereby offering us the possibility of change. This is not to take a wholly Foucauldian perspective – Bourke respects but rejects Foucault’s claim that we should classify rape as “just” assault in order to disentangle institutional power from sexuality – but it is also not to paint a world in which change is impossible. It is a historian’s view, surely; that the particular constructions of different ages condition criminality and behaviour, rather than resorting to any essentialism.

Overall, this is not a book that I will easily forget. That is no bad thing. It is, though, a dismaying book. Not for its writing, its research, or any intrinsic characteristic. But for what it charts and its ongoing prevalence.