Joseph Brooker on Ravilious & Co: The Pattern of Friendship at the Towner Art Gallery

Joseph Brooker on Ravilious & Co: The Pattern of Friendship at the Towner Art Gallery

The painter and engraver Eric Ravilious (1903-1942) was raised in Eastbourne on the Sussex coast, and has lately been adopted as a central instance of Sussex art. His watercolour paintings of the 1930s depict the scenery of Southern England – the South Downs, ploughed fields, cottages, farm machinery, local industry and coastal vistas – in his distinctive style. Scenes are vividly clarified in a kind of simplification, though the density of technique is visible in Ravilious’s rendition of blades of grass or the grain of wood. Ravilious was equally skilled at woodcuts, engraving hundreds of designs in a career that was curtailed by his early death while working as a war artist in Iceland.

The Towner Gallery in Eastbourne holds a permanent archive of Ravilious’s work, but in this major new exhibition (27th May-17th September 2017) it situates him amid a host of contemporaries. These artists include the brothers Paul Nash (a war artist in World War One, as Ravilious was for its successor) and John Nash; the designer Enid Marx (distantly related to Karl, and one of the first designers of seat fabric for London Underground); Barnett Freedman (eventual designer of Jubilee postage  stamps and Ealing Studios’ logo) and several more. The mere number of artists included makes this an extensive exhibition, but that fact is redoubled by the density of coverage each of them receives, working in various media. Landscapes and seascapes by Edward Bawden and John Nash are hung next to Ravilious’s renditions of comparable scenes. The same goes for engravings, which are typically much smaller but assembled in great numbers that take time to scrutinize. It needs the best part of three hours to experience the whole exhibition properly; it’s the only time at the Towner Gallery that I’ve heard staff say on the way in that you can leave for a tea break halfway through. 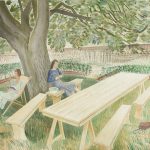 For anyone who hasn’t previously seen Ravilious’s major paintings in person, they will likely be high points of this exhibition. Any number of these masterpieces of composition keep turning up as the visitor turns a corner: the Sussex scenes of Two Women in a Garden and Caravans, the late war paintings like HMS Ark Royal in Action where what might have seemed a primarily pastoral artist suddenly fills every canvas with state-of-the-art military technology. I happened to have seen many of these before, in Dulwich Picture Gallery’s 2015 retrospective, so on this occasion I was equally interested in other items. Several of the artistic colleagues covered by the exhibition met at the Royal College of Art, and pieces of material evidence of those years are preserved here: college registration cards, letters and the playfully arrogant editorials of student magazines (one of which hopes for the dissolution of its magazine so that a new one can start with the energy that such ventures typically possess). Peggy Angus and Helen Binyon produced books of sketches made around London, with captions recording the dialogue from these fleeting social scenes in parks and streets. The amount of correspondence to and from artists on show here makes it something of a museum as well as a gallery.

Several of the featured artists did extensive commercial work, as designers of book covers, frontispiece emblems, wallpaper and so on. Perhaps the exhibition title Ravilious & Co hints at the businesslike workshop from which one would expect such prolific industry. Ravilious himself seems to have carved an unceasing production line of emblems and illustrations for books and calendars, yet every one of these often tiny designs is composed and rendered with perfect precision and grace. Dozens of book covers and plates are displayed from a range of artists, making a miniature gallery of interwar English publishing and culture. It is striking how far the various artists featured remained in contact and continued to produce parallel and comparable work: the sense is of a relatively unheralded, but unusually coherent, artistic school.

The artists whose work was at once newest and most impressive to me were Tirzah Garwood (Ravilious’s wife) and Helen Binyon. Garwood had been Ravilious’s pupil, and worked in similar media, but does not seem to have been awed into adopting his tones. Her engravings of urban types (including philistine visitors to a former incarnation of the Towner Gallery itself) bring a note of defiant satire to the show. Binyon excelled both in delicate painting and in engravings: one of the first pieces on show as one enters is her woodcut The Wire Fence, showing a girl crawling through the barrier, and her illustrations of Pride & Prejudice are displayed in a later room. Binyon seems one of the finest artists on show here, but doesn’t even have a Wikipedia page. I hope this exhibition inspires someone to address that.