Joseph Brooker on Damsels in Distress and A Quiet Passion.

Joseph Brooker on Damsels in Distress and A Quiet Passion.

I happened to see Whit Stillman’s Damsels in Distress (2011) and Terence Davies’ new film A Quiet Passion (2016) in quick succession, and thought about them together.

Stillman became cherished in the 1990s for a trio of films that articulated a well-educated, preppie American sensibility to gentle comic effect. He then made no pictures for over a decade, doubtless for industrial and commercial reasons but perhaps also due to a disarming lack of urgency on his own part. Damsels in Distress was his long-awaited return, and has been followed by what by Stillman’s standards is an energetic revival: a few episodes of a TV series for Amazon, and a new feature film, Love & Friendship (2016), adapted from Jane Austen’s Lady Susan. The British director Davies offers a slight parallel: immense acclaim for his films in the early 1990s, then a period of greater obscurity and a recent return to literary material via what sources of financial support happened to be available (the new film’s credits make plain how it benefited from filming in Belgium). Both directors are ranked among the distinctive auteurs of recent decades, but with fragile, stop-start careers.

Damsels in Distress follows a group of women undergraduates at a US university, led by Violet (one of Greta Gerwig’s first prominent roles) in an evangelizing  mission to help others. They run a Suicide Prevention Centre, noting that with suicide, unusually among ailments, prevention is not nine tenths but ten tenths of the cure. Slapstick scenes show despairing members of the college community throwing themselves off roofs. Succumbing to her own romantic disappointment, Violet leaves campus and discovers a new brand of soap whose scent she believes can inspire people to a sunnier outlook. She also aspires, in an echo of the early Bryan Ferry, to start a dance craze, on the grounds that dance crazes are among the great achievements and movements in history, and the film closes with the characters demonstrating The Sambola. (In fact this is preceded by an unabashed dance routine that makes the film seem the unheralded precursor of La La Land.) Most of the film is driven by such daffy episodes. Though it ostensibly centres on suicide prevention, it can never be taken too seriously. Much of Stillman’s effect comes from characters making earnest statements, often in full sentences and with verbal features more typical of written prose than speech, which are also daft or ludicrous. When Violet elaborately thanks her new friend Lily for ‘chastising’ her for arrogance, the act is unlike anything often seen in contemporary film or life: in fact it’s more like something that could be said in a Jane Austen adaptation. Some of the quirky force of the film thus resides in anachronism: this seems supposed to be the present day, yet the characters have hardly altered since those of Stillman’s first feature Metropolitan (1990), and might even be more at home at Bryn Mawr in the 1950s – or Bath in the 1800s.

That’s a link to A Quiet Passion, which narrates the life of the poet Emily Dickinson from her early expulsion from a religious school to her death in 1886. A striking digital dissolve is used to send the teenage Dickinson’s family through time, and on the other side the demanding role is played by Cynthia Nixon (I trust that someone has used the headline Sestinas and the City). Dickinson wrote several decades later than Austen, but for many viewers an Austen biopic would be the closest cinematic cognate to Davies’ film: the woman writer, producing her work in private (and eventually, here, in perpetual seclusion), oppressed by patriarchal attitudes to the capacities of her sex, remaining unmarried and immersed in the life of her respected family. I had not known that Dickinson was considered such a sharp wit, but here she unleashes dozens of barbed observations and ripostes that make Austen’s look mild. For half the film she is accompanied in this by her friend Vryling Buffam, whose even more determined campaign of cheerfully cynical one-liners makes her less a new Austen than a prototype for Dorothy Parker. Like Damsels in Distress, then, the film is driven through its episodes mainly by clever dialogue – yet here that elaborate speech is not cherishably innocent and foolish, but archly deployed as entertainment or as a weapon in the micropolitics of the household and (very) local society. 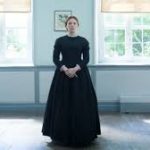 Much critical attention is nowadays given to women on film, who gets represented and who gets to speak. In that regard at least, these two films directed by men have something to offer a feminist viewer. Both slightly marginalize male characters, centring instead on women’s interactions and conversations. Dickinson even has an excited conversation with her new sister-in-law in which it is made clear that the main gain of marriage is the chance to talk about the Brontës and George Eliot with one’s new female relatives. Damsels in Distress is not Stillman’s greatest work, almost too light for its own good, while A Quiet Passion ends amid bitterness, illness and death. But they’re analogous in being fuelled by verbal wit, the carefully crafted spoken word.