Martin Eve on Edward Albee’s The Goat, or Who is Sylvia?

Martin Eve on The Goat, or Who Is Sylvia?

This Saturday I saw the revival of Edward Albee’s The Goat, or Who is Sylvia? at the Theatre Royal Haymarket.  Although I was familiar with the problem play’s central conceit, this work still retains the power to shock. While the piece is comical at times, it is also essentially a tragedy (the play has a bracketed subtitle: “notes toward a definition of tragedy”). It seems to ask, through the medium of an extended family argument: what are the bounds of tolerance in a society and how far can they be modified by cultural negotiation? It also asks about the interweaving of time and knowledge and whether or not, once these cultural codes have been violated, it is possible to “put Humpty back together again”. Its politics seem, to me, to be complicated. 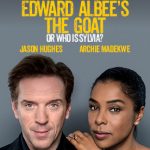 For those unfamiliar with the play: Martin Gray, it emerges, is having an affair with Sylvia. He confesses this to his best friend, Ross, who then writes to Martin’s wife, Stevie. Martin and Stevie’s son, Billy, also finds out. The marital strife that ensues is somewhat complicated or intensified, though, by the fact that Sylvia is a goat.

Although Martin has attended an AA-type support group for his bestiality (“goat-fuckers anonymous” as Stevie puts it), the play makes it clear that he has no regrets. Martin is clear that Sylvia “loves” him while Stevie is equally clear that she views this as a non-consensual rape of an animal that is not capable of human sexual love and desire.

Yet Albee shows that the outrage around bestiality is a substitutable figure. For instance, Martin’s son is named Billy G(oat); a gay teenager for whom Martin holds a repressed contempt. Further, near the close of the play, Martin tells of a friend holding a baby and becoming momentarily sexually aroused with the strong implication that the baby was Billy and the friend was Ross. Finally, the play contains a moment of incestuous sexual interaction between Billy and Martin. This catalogue of taboos, so extensive that it surely would have pleased Joe Orton, is deployed in service of the question of the nature of sexual love.

In terms of genre, which is important to the piece, The Goat feels like a comedy at first; specifically, a parody of a comedy of manners. After all, the absurdity of the situation makes it seem as though we are meant to laugh. Everyone can get a snicker out of “you fucked a goat”. Yet, in one of the work’s meta-theatrical moments, Stevie herself says: she laughed “at the awfulness of it, the absurdity, the awfulness; some things are so awful that you have to laugh – and then I listened to myself laughing, and I began to wonder why I was – laughing? It’s not funny when you come right down to it”. At some point in the play’s progression, “just like that”, the audience, like Stevie, “stopped laughing”. For the play’s realism, its naturalism in Martin’s bestiality becomes a thing of horror. As much as it is a substitutable device, as above, it is also the thing itself.

As an audience, why do we stop laughing? The characters remain actors upon a stage. The thing itself is never actually the thing itself. However, we stop laughing because we can also see the absurdities of the logics that condemn Martin. Why is it OK, beyond that we say it is less “not OK”, that Ross, Martin’s friend, has had affairs with humans and mislead his partner? Is not a betrayal a betrayal, a betrayal? Why has this not “brought [his partner] down” as Martin has brought Stevie down? What are our intrinsic value judgements here about animals, lowliness and morality? Do we doubt that Martin loves both Stevie and Sylvia? We do not, although we may question the reciprocity. Why do the victims of infidelity often blame the third party – the scapegoat – rather than their (ex)partner’s behaviour?

Martin’s act – and Stevie’s knowledge of it – represents a fracture in societal time. As Stevie says to Martin: “you have broken something and it can’t be fixed”, so far is Martin’s conduct from the societal norm. By the rules of society, it is not possible to come back from bestiality. Yet it is Stevie who ultimately kills Sylvia in an act of maenadian vengeance, not because Martin loved Sylvia, but because Martin said that Sylvia loved him “as much as” Stevie. This slaughter is the absolute act of breakage. For, Albee’s play seems to suggest, until that moment, were the rules of society differently imagined, there could have been repair. Yet death – or murder, perhaps – shatters physical life as Martin’s conduct smashed societal norms.

The Goat, then, is a difficult play that is hardly really about bestiality. It is also not difficult in the way that the works of Sarah Kane are difficult; that is, Albee’s taboos remain mostly offstage rather than viscerally presented. It is a difficult play to write about because one can quickly find oneself in a moral minefield. It is also difficult because it sticks with you. It is a type of mental contamination that, in the extremity of its allegory, forces a constant questioning of one’s own moral precepts. Why do we believe as moral those things that seem intrinsic? What is unimaginable and why is it unimaginable? What things have been unimaginable that are now permitted, imagined, and re-performed? And in imagining them possible, how much of the delicate china of life – so smashed upon Albee’s set by the end of Martin and Stevie’s ragings – remains?

In a strange way, then, the politics of the play appear at once liberal and potentially conservative. There is a clear liberal bent here since the moral relativity that the work introduces is crucial to progressive attitudes. Conversely, in its allegory and substitutability, something strange happens to the play’s own ostensibly “leftwing, proletarian, snobbish, cynical” history (as Martin describes Ross). Is the thing that is deservedly broken a set of socially constructed repressive codes (and therefore should be punctured and de-naturalised) or should we have care in changing norms, since once “broken” they “can’t be fixed”? What does it mean that Albee, himself a gay man, might use a presumed repugnance among his audience towards bestiality, towards paedophilia, and towards incest, as some extreme cipher for a normalisation of the history of queer sexuality? Does the extremity of Albee’s dramatic situation unveil past attitudes towards homosexuality as bigoted or is it highly offensive in its comparison? Certainly, the play is not coy about this: the play contains several instances of Martin’s homophobia and it is no coincidence that Sylvia is a female goat. By contrast, the two final lines of the play seem to simultaneously re-inscribe and question the nuclear family unit that formed the normative moral centre before the play’s devastating revelation: “Mom? Dad?” asks Billy, with a final question mark.

These are the types of questions that remain haunting about and after the work; the piece is not didactic, but double-edged and relative. These questions and their answers remain difficult to express since to do so is to imagine and to speak the culturally unimaginable; the societally inadmissible. They are difficult to express because they question identity, since sexual identity is such a core facet of contemporary identity.