A recent author event at Waterstones Piccadilly (Europe’s largest bookshop apparently) surpassed my expectations for the kinds of awkward conversations you often experience at meet-the-author readings. The first reason for this was obvious: the moderator of the conversation was Adam Roberts who is not only a renowned science fiction (SF) author and academic professor but also – and I speak from direct experience here (Roberts has participated in several events at Birkbeck’s Centre for Contemporary Literature) – a gifted comedian when it comes to live performances and always entertaining in person. The second reason was a fact of which I was unaware: that Spufford and Robinson appeared to be friends and exuded an easy camaraderie as well as an unlikely set of shared interests. 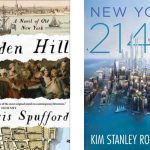 I say unlikely because, on paper at least, the two authors appear very different.  Spufford’s Golden Hill (2016) is published with Faber & Faber, well known for its high literary credentials having introduced writers like T. S. Eliot, W. H. Auden and Sylvia Plath to readers. Robinson’s New York 2140 (2016) is published with Orbit, a publisher that specialises in science fiction and fantasy titles, known for publishing SF heavyweights such as Iain M. Banks, Ken Macleod and Charles Stross, as well as acclaimed fantasy authors such as Trudi Canavan and Laurell K. Hamilton. Furthermore, Spufford’s new novel is a work of historical fiction set in mid-eighteenth-century Manhattan when the city was a settlement of just 7,000 British and Dutch traders. Although Robinson’s novel is set in the same city it takes place some 400 years in the future in a speculative twenty-second-century New York, as the metropolis sinks beneath the rising sea levels caused by global warming.

What took place during this conversation was, to my mind at least, a fascinating insight into some of contemporary literature’s most pertinent questions concerning genre, setting, historical representation, and our ideas about lived time, or temporality. Roberts invited the two authors to consider their respective novelistic genres – the historical novel and science fiction – and to what extent each form invites the reader’s participation in worldbuilding. Both Spufford and Robinson agreed that the empirical world of the reader can be rendered less certain and more provisional through these two very different novelistic genres. Of course this is a well-known fact about science fiction – that the speculative futures it imagines serve as a mirror for the reader’s (and the author’s) present, inviting a critical reflection upon the kinds of present-day socio-political norms, attitudes, and behaviours that we take for granted. But it is perhaps a fact less frequently acknowledged that the historical novel seeks to do something similarly speculative. Spufford insisted that he wished his readers to experience the contingency of the historical past. What struck me about Spufford’s comments was the tangible sense of the presentness of the historical past underpinning his own take on the historical novel: that is to say, the reader’s vicarious sensation of inhabiting the past necessitates an awareness that, even though we know the larger historical outcome of particular events, we still experience the feeling that history could have taken a different course, that things could have turned out differently.

Science fiction has developed a sub-genre to deal with precisely this question: the alternate history. As Robinson pointed out, alternate histories restore a sense of “wild possibility inherent to the times” as exemplified for him in novels such as Terry Bisson’s Any Day Now (2012) or Ian R. MacLeod’s The Summer Isles (2005), the latter showing us what a fascist British state might look like had Germany won the First World War. But as Spufford insisted, “there’s never a straight historical fiction – if it’s good, it makes the reader believe that events might turn out some other way.” I was particularly intrigued by Spufford’s open admission that “I want to use the SF toolkit even though I’m not a science fiction writer” – something that many contemporary “literary” novelists will do whilst simultaneously refusing to acknowledge any debt to the genre tradition (I’m looking at you Margaret Atwood and Jeanette Winterson), which infuriates SF writers and critics like Ursula Le Guin. Spufford’s acknowledgment struck me as refreshing and genuine. He suggested that SF offers a “better and bolder realism” for examining the macrocosmic scale requisite to understanding how the world works through complex processes and systems which, as he quipped, is much more interesting than reading another novel about adultery in provincial France. This brought the conversation back to the unending question of realism that both animates and impedes discussions about the contemporary novel. As Robinson and Spufford agreed, the cognitive work required of readers of the historical novel and the science fiction novel relies upon an understanding of realism, whilst simultaneously reaching beyond realism’s strict parameters of verisimilitude. In the audience Q&A Robinson targeted a particular mode of contemporary realism – the conformism of postwar American fiction in what Mark McGurl has called “the Program Era” of MFA creative writing courses and increasingly professionalised authors. Defending his love of the SF “infodump,” Robinson pointed out that critics’ frequent attacks on this narrative convention (sometimes used to devalue science fiction as a genre) constitutes an ideological assault on SF and its ability to be different from, and much more political than, domestic realism. “How do you write a novel when there’s too much to know?” he asked in rebuke.

Finally, it became clear how both novels were engaged in a lively dialogue about the present: specifically, the post-2008 present of capitalism’s current crisis. Spufford’s novel features a protagonist whose line of credit recalls what Robinson called the “paper to vapour” dematerialisation of money even from its abstracted form as a paper credit note (that promises “to pay the bearer the sum of…”) to the bewilderingly unreal columns of digital intangibility. Robinson made his name with his Mars trilogy in the early 1990s, which took a longitudinal look (over 200 years) at the colonisation of Mars and the ensuing war among transnational corporations whose unchecked power led to their grip on Earth politics and their ignominious development of the Martian landscape in the pursuit of profit. In his Mars novels, the revolutionary underground finally overcomes hyper-capitalism through a non-violent velvet revolution on the red planet. In New York 2140 Robinson returns to this theme in a more Reformist spirit, with the introduction of a Piketty tax (named after Thomas Piketty, author célèbre of Capital in the Twenty-First Century) and a nationalisation of the banks rather than storming the barricades. Set in the 1740s and the 2140s, Spufford’s and Robinson’s novels thus speak to us in different ways about our own historical moment of over-leveraged finance and austerity.