Joseph Brooker on Eduardo Paolozzi at the Whitechapel Gallery

Joseph Brooker on Eduardo Paolozzi at the Whitechapel Gallery

The artist Sir Eduardo Paolozzi (1924-2005), Edinburgh-born of Italian descent, was a pioneer of Pop Art. The Whitechapel Gallery is exhibiting his work (February to May 2017) in a major retrospective showing over 250 items.

Paolozzi’s early works, from Paris and London in the 1940s, include heavy, rugged bronze sculptures and drawings that don’t disguise their flatness. Picasso is an influence; the metal sculptures of distorted figures perhaps belong to the same world as the different shapes, in a similar period, repeatedly produced by Henry Moore and Giacometti. Paolozzi is then shown to move closer to commercial design, with his company Hammer Prints in the mid-1950s. Patterns take intriguing titles from place names. A big Collage Mural (1952) of geometric lines hung on the walls of an architectural practice. A cocktail dress is decorated in Paolozzi’s patterns. Pop Art is something else again. In 1952 Paolozzi presented a lecture called ‘Bunk’ consisting of no words, just a series of projected images taken from mass-cultural sources. The images are on show again here: adverts, popular science magazines, science fiction. In a lot of cases, Paolozzi seems to have done little with the materials. The artwork of publications like Thrilling Wonder Stories retain great charm, but here Paolozzi’s contribution is not so much any manual skill, rather a way of looking anew at such material.

Paolozzi goes on to intervene more with his Pop materials. General Dynamic F.U.N. (1970) is a box set of individual screenprints and photolithographs from press, advertising and cinematic images, treated in strange colours and mixed with abstract patterns. The viewer can’t get at the box, only watch a video in which the exhibition’s curator and two Paolozzi enthusiasts handle and discuss it. Their talk of a ‘syntax’ of the images and of the viewer becoming a co-creator, simply because the individual sheets lack an order, is overegged. I wasn’t convinced that these disparate pages innately tended to demand or imply any sequence as (presumably a relevant comparison) the prose of B.S. Johnson’s The Unfortunates (1969) might, as a function of its medium, be said to do. But we get to see J.G. Ballard’s note on the work – ‘a unique guidebook to the electric garden of our minds’ – pointing up his interest in Paolozzi’s art which dated back to the 1956 exhibition This is Tomorrow.

A wall in the same room holds As Is When (1965), a sequence of twelve large prints in which bold colours and patterns are annotated with cut-out fragments from the philosophy of Ludwig Wittgenstein, and from Norman Malcolm’s memoir of the philosopher. Silhouetted soldiers, stripes, squares, skyscrapers, the shape of Mickey Mouse, combine with sentences like ‘Is belief a kind of experience?’ and ‘A picture is a model of reality’. I’m not sure how far Paolozzi’s understanding of Wittgenstein (who also recurs later in the exhibition) was deep or merely opportunistic or intuitive. But here words and image create an intriguing collision. Both elements bring something that they would not have alone. 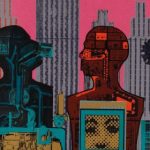 Paolozzi persistently uses images of machines and mechanical parts, sometimes seeming to stage them as buildings in landscape in a way that provocatively suggests Brutalism or totalitarian architecture. On the second floor of the exhibition we also see his work of the 1970s take a more sardonic and parodic relation to the art world itself; a late sequence of busts; information about his ‘primitivist’ work with materials from the British Museum in the mid-1980s; and a reminder of his 1982 mosaic designs for Tottenham Court Road station, most of which is said to have been preserved and reassembled when the station was reconstructed in the mid-2010s.

The single most striking development, seeming quite different from the more expressionist earliest work, is the way that Paolozzi’s art takes on the flavour of the computer. In cheerfully lurid colours the patterns of his prints comprise grids, circles, rectangles. They suggest ideas of electronic networks and systems, or more simply the actual inside of electrical items and circuitboards. Thomas Pynchon’s fictional character Oedipa Maas, circa 1964, looks down on the ‘ordered swirl’ of urban sprawl and is reminded of the ‘unexpected, astonishing clarity’ of a printed circuit. Paolozzi’s imagination here suggests a related instinct for seeing the world through electronic patterns that, in these later decades of the twentieth century, were becoming pervasively influential on everyday life. We can readily see Pop Art as enduringly pertinent to our world of received images; but perhaps Paolozzi’s fascination with circuits and networks is still more distinctively prescient, suggesting the very technology on which his art can now be instantly viewed and transmitted.