In a self-referential high point of Philip K. Dick’s The Man in the High Castle (1962), two characters debate whether a fiction depicting an ‘alternate present’ belongs to the science fiction genre, unaware that they are in a novel of alternate history by a science fiction writer. Dick’s novel, in which the Axis powers won the Second World War, is set around the time it was written, and features Nazis rapidly travelling around the world by rocket instead of aeroplane: it arguably qualifies as SF. That probably can’t be said of SS-GB, BBC One’s 2017 adaptation of Len Deighton’s 1978 novel. This story is set in 1941, the year after a successful Nazi invasion of Britain. The animated credit sequence effectively suggests the back-story of a Battle of Britain that has gone the wrong way, leaving the drama itself to depict subsequent intrigue in Nazi-occupied London. Central character Douglas Archer is a police detective investigating a murder, which proves connected to plots to develop an atomic bomb. Meanwhile the counter-factual geopolitical scene is sketched through hints and anecdotes: the King of England imprisoned by the SS in the Tower of London; Churchill executed; a Royal Navy Admiral seeking to be in the US what the real De Gaulle was in London; northern Britain seemingly still unconquered by the Nazis, whose campaign remains work in progress. 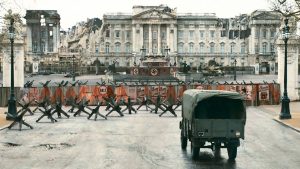 If SS-GB, unlike Dick’s novel, isn’t science fiction, what is it? For one thing it depicts a kind of dystopia. Just as evidently, it’s a historical fiction, where costume and production design are essential to the texture: the world of boarding houses and old gramophone records might fit a Patrick Hamilton adaptation. But of course it’s hypothetical history, like a Wolf Hall in which Henry VIII stays happily married to Katherine of Aragon for life and the Church never separates from Rome. An episode circles around a ceremony for the exhumation of Karl Marx: an event I first assumed was a piece of Nazi anti-communism, but turns out to be a legacy of the continuing Nazi-Soviet pact, with Marx’s remains to be shipped from Highgate to Moscow. As he was a German Jew, that proposition is thought-provoking in itself: if not Highgate, Marx surely belongs in Trier (where in non-counter-factual Germany his birthplace is now a terrific museum), but unsurprisingly the Nazis don’t want him and Stalin does. This has a logic, though not one enacted in our world.

The iconography of German soldiers and SS officers also belongs to another genre: the war film, or even more specifically the prisoner-of-war film, as it’s from such films as The Great Escape (1963) and Escape to Victory (1981) that we have become used to the sight of English people dominated, and occasionally humoured, by guards in jackboots making clipped Teutonic pronouncements. Then again, SS-GB is also akin to an espionage thriller: secret plots to free the King, hidden atomic plans, double agents. Deighton was a spy novelist above all (though also, I’ve learned, a pioneer of newspaper cookery columns), so the programme really belongs alongside John le Carré more than Hilary Mantel.

Yet even more basically, Archer is a policeman: so the genre he thinks he’s in, at the outset, is crime. His initial concern is not ‘How to liberate England from the Nazis?’, but ‘What leads do I have in this murder case?’. As often, detection provides a way of burrowing in to society, but the society here is even darker and more dangerous than usual in the genre. It also provides a certain poignant mismatch in scale which is left unremarked. Repeatedly Archer says ‘I’m investigating a murder’ as though the statement carries the alarming gravity it would do from Hercule Poirot in a country house. But he says it amid a ruined London in which hundreds of thousands have recently been killed and everyone’s life is at the mercy of the invaders. To investigate a murder, in the middle of a war – that’s a strange combination, which corresponds to a collision of genres. For that matter there’s an even larger unspoken contrast, largely unknown to Archer: that he’s doggedly investigating a murder while a genocide is going on.

Fredric Jameson once ingeniously proposed that the fascination of the heist thriller Dog Day Afternoon (1975) was in its staging of relations between local police and FBI, representing different levels of the state. Something similar is true of SS GB, where Archer, ordered by the Nazis to solve the case, can walk into a German army camp seeking to make an arrest and be told that ‘civil police’ have no remit here as they did in the days of the British Army. The protagonist is working for an ostensibly British institution, the Metropolitan Police, yet serving the occupying power: the political meaning of his actions is ambiguous at best. Meanwhile much of the plot turns on the rivalry between the SS and the Germany Army, which the British Resistance hopes to exploit. Some of the drama thus arises not so much from individuals as from institutions – and these can be said to correspond to genres: war film (Wehrmacht), spy thriller (SS), detective fiction (Met police). So it is that the experience of genre in SS GB is peculiarly integral: the medley of modes dynamically articulates conflicts in the historical situation it imagines.