On Saturday March 11 I went to see The Godfather at the London Palladium – with a live orchestra accompaniment – in the company of my son. It’s a film I’ve seen many times, a film I use as a touchstone in my teaching, but it was his first time and watching it with him felt like a big moment, not least because it’s a great film about fathers and sons. 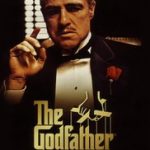 I’d raved about the movie in advance so was slightly anxious as the lights went down and the musicians began to play Nino Rota’s plaintive score, that tremulous piccolo theme. What if he didn’t like it? What if he thought it was boring? I was anxious too because he’s only thirteen, and the film’s rated 15. Though since he’s a massive fan of Deadpool and Logan I was pretty sure the violence in The Godfather wouldn’t phase him for an instant.

But being with him, watching the film as if through his eyes, made me look at it in a new way. Though maybe that would have happened anyway. Every time you revisit a work of art that’s been important to you, you see it with new eyes, because of where you are in your life. I hadn’t watched The Godfather all the way through for some years, and in that time my own father has become ill, with dementia. So my own dad was very much in my thoughts this time, especially as I watched Marlon Brando’s performance.

I used to think Brando was a bit hammy in the role of Don Corleone – the cotton-stuffed cheeks, the heavy ageing make-up, the raspy voice – but seeing it again the vulnerability and tenderness of the performance hit home for the first time. Far from being the alpha male paterfamilias, Don Corleone actually spends much of the movie an invalid, hospitalised after an assassination attempt, then stretchered home and carried up the stairs in an image out of the New Testament. Even when he recovers, he withdraws from the family business, delegating and deferring to his youngest son, Michael. Brando’s performance in these moments – when Michael clasps his hand in the hospital and a single tear escapes the old man’s eye, or when consigliere Tom Hagan tells him his eldest son Sonny has been killed – is beautifully open and raw. He’s not hiding behind make-up and mannerisms, he’s transcending them to show something true. This vital, powerful man laid low.

I was struck again as I always am by the sheer elegance of the storytelling: the way the film builds from Michael’s early declaration ‘That’s my family, Kay, it’s not me’ to the moment, right at the heart of the movie’s three hour running time when he crosses the line and kills gangland rival Sollozzo and corrupt cop McCluskey; and then the dying fall from there to the end, when Michael has become the new Godfather, a colder, more ruthless killer than his father ever was, and the door closes on Kay. The precision of the story construction here always reminds me of Hemingway’s line ‘Writing is architecture, not interior decoration’.

Though there’s plenty to admire in the interior decoration of The Godfather too. In his (admittedly self-serving) autobiography The Kid Stays in the Picture studio boss Robert Evans takes credit for forcing Francis Ford Coppola to revise an early, cut-to-the-bone edit of the movie in order to restore what he called the ‘texture’ of the piece. And texture is one of the great pleasures of The Godfather, from the luscious period production design to Gordon Willis’s justly renowned cinematography, all Caravaggio chiaroscuro and shades of oak and honey. The music too – from the haunting main theme to the jaunty folk songs of the wedding party and the languid crooning of the Sinatra-esque Johnny Fontane – the rich variety of the music means that this movie above all others is one that deserves to be experienced with a live orchestra.

And then there are the tiny moments where story is suspended and the movie becomes pure texture: when an elderly guest at the wedding sings his party piece, or when hitman Clemenza stops what he’s doing to show Michael how to make the perfect pasta sauce. Moments that might ordinarily hit the cutting room floor, but here add to the warmth and organic integrity of the picture, its emphasis above all on the rituals of family life.

But that door closing on Kay at the end highlights something that troubled me this time around: the way women’s voices, women’s stories are side-lined. Kay herself, in spite of Diane Keaton’s winning performance, is only very lightly sketched in – she does little but worry about Michael – and some of the other women’s roles are almost non-existent. We see Don Corleone’s wife from time to time, notably in the wedding sequence, but hardly ever hear from her. She only has a handful of lines in the entire movie, and no substantial scenes of her own. We have no idea who she is, what drives her, how she feels about the family business. Similarly, Michael’s Sicilian bride Apollonia is apparently only there to look pretty and get killed. Talia Shire as Michael’s sister Connie gets more to do, and there’s real fire to her performance. The fact that she’s written as a victim, beaten by lousy husband Carlo, is – one might suggest, if one was being charitable – an indicator perhaps that the movie is aware of the misogyny of the world it depicts.

So although this is, as I said at the beginning, a great film about fathers and sons – and it was certainly a great bonding experience between this father and his son – that’s also in the end perhaps its greatest failing.

One thought on “Daragh Carville rewatches The Godfather”