Isabel Davis on the Journals of Angela Carter at the British Library.

Angela Carter kept journals from 1961 until her death in 1991. These are all archived, with others of Carter’s papers – drafts of her works, correspondence and photographs – at the British Library. Anyone can go and read them. These journals are a mix of different things. There is a lot of personal material of all kinds mixed in with drafts for poems and story ideas and notes on her reading and films she had seen. She didn’t write every day. She often didn’t date an entry. In the early volumes she will often begin entries with a comment about the weather or the seasons. ‘An 18th C sort of day; frost & sharp sunshine & mists’ she writes in one, ‘There should be broken statutes of pagan gods & goddesses in the gdns on a day like today’. ‘The books are idiosyncratic: the covers and some of the pages are decorated with pictures cut out of magazines; the entries don’t always follow, getting interrupted by a draft of something. In one booklet she writes all the way through just on the recto sides (that is, the right hand side page) and then, when she gets to the end of the booklet, she goes back, writing on the verso sides. The pages are full of crossings out, especially of drafts of poems. She writes over the top of her own work BAD BAD BAD or NONSENSE. Sometimes she makes it fully illegible by sticking a paper cut-out over the top. The image that accompanies this blog, a painting by Max Ernst, called Attirement of the Bride, is an image that Carter includes on one of the pages of her journal. 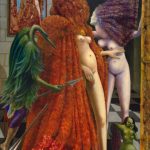 Max Ernst, Attirement of the Bride

Throughout her journals she writes about her reading. She rarely pulls her punches. ‘Katherine Mansfield is crap’, she writes. Commenting on Descartes’ Discourse on Methods, she says: ‘How anyone took him seriously after that I don’t know’; she is reading it whilst her husband is away, ‘leaving me alone with Descartes, whom I loathe’ she complains. In one volume she has a list of books she’s read (some of them probably for her degree in English at Bristol University) with one word or a short phrase by way of comment. The list is really telling about her influences and how they made her as the writer we know. She disliked Jane Austen but, it seems, couldn’t keep away. She describes Mansfield Park as ‘An obnoxious book’ but in the same year also reads Pride and Prejudice, alongside which she writes ‘Just can’t take her’; Persuasion, which she is kinder about ‘Not half bad’ and Emma, which doesn’t even merit a proper word, just an ‘ugh’. Perhaps it was her university syllabus which held her nose to the Austen grindstone or perhaps she had some other compulsion bringing her back. Carter’s suspicion of naturalism, in writing like Austen’s, threads through her journals.

She much prefers the Brontës, returning to Wuthering Heights repeatedly. ‘I must be Cathy, rather than Heathcliffe’, she writes on one occasion, ‘bearing in mind that Cathy was Heathcliff, anyway’. ‘Read’, she writes in a note to herself, ‘more Boris Vian (for style) […] Wuthering Heights (for passion) Nabukov (for precision).  She also loves Samuel Beckett, writing, after an extended quotation from his novel Watt, ‘Beckett is great, great, great; why can’t I write like bloody Beckett; I wish I could write like bloody Beckett’. Defoe is ‘Brilliant’, ‘Good’, ‘Peculiar’. T. H. White and John Cowper Powys are both ‘Superb’. Dashiell Hammett’s Maltese Falcon gets a bald ‘shit’, whilst works by Honoré de Balzac and Henry Miller are just ‘okay’ or ‘all right’. John Wilmot’s pornographic poetry is described as ‘vicious’ but, apparently without contradiction, also ‘all right’. She didn’t like Sheridan Le Fanu’s Wylder’s Hand as much as she thought she would, finding it ‘not very doomy’ and she professes not to ‘know what to make of’ Alexander Pope’s Dunciad. W. B. Yeats in Carter’s view is ‘an utter drivelling fool’ and she dismisses Wallace Stevens as ‘only a minor talent. Pretty pretty. Old maidish. Humourless’. In a later journal, though, Carter turns to Stevens more seriously, copying out sections of his Necessary Angel at a crucial juncture in her life.

Medieval literature, the subject she took on to masters level (although she dropped out of the course half way through), is an important frame of reference throughout the journals. Her dense engagement with medieval tales and romance motifs in her novels and short stories would tell us as much. Here is a snippet of imagined dialogue from a prospective prose retelling of Sir Gawain and the Green Knight, which never got off the ground:

‘My wife,’ said Sir Bertilak, ‘used to be so good at amateur theatricals when she was at school.’

Mrs Bertilak as amateur actress is brilliant – her deceptive wiles, her love of dressing up, her use of the curtain around Gawain’s bed drawn as if round a proscenium arch. Carter sees Middle English literature as interconnected with her own ambitions as a writer: ‘I need to be extraordinary. For this is it, the need to be extraordinary. That was why I opted for Middle English’, she says.

I’m not sure what lessons we should all take from this, except that it’s good to keep a diary and include in it the titles of books we read and our reflections on them, no matter how brief. Not least so that if when we get famous and our papers are archived at the British Library, people can see what made us, what we rejected and what was assimilated, what we reimagined and what we turned to at the moments that mattered, and then they can laugh and say ‘that sounds about right. Yes, that fits with what we knew they were already.’

The Angela Carter papers are available to read at the British Library (Additional Manuscripts 88899). Her journals are Additional MS 88899/1/86-100.