Martin Eve on Nice Fish at the Harold Pinter Theatre

Martin Eve on Nice Fish at the Harold Pinter Theatre

The reviews were mixed and I wasn’t sure what to expect. Two men sitting on a sheet of ice, fishing and talking. For that is the plot of Nice Fish almost in its entirety, which I saw at the Harold Pinter Theatre this weekend. I had heard that it was derivative; “Waiting For Codot” as the Guardian smugly put it. I had, myself, rechristened it Godot on Ice but far from the accusations, what I actually saw was reference, not derivation.

It helps, for me, that one of the two men sitting on the sheet of ice, though, happens to be Mark Rylance. People gain cultural capital these days by sneering at Rylance; one of the perils of his wider success. For me, he remains one of the finest actors of the English stage that I have ever seen. His transformations between characters are astonishing and his ability to tease out the humour in the bleak lines of Nice Fish is almost fantastical. Mark Rylance Goes Fishing was the other alternative title that I had composed in my head. 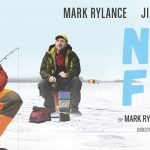 The play itself is composed of fragments of Louis Jenkins’s prose poetry interspersed by blackouts and the interventions of a small cast of other characters. It also has various elements of meta-theatre. The stage hands are introduced at one point while the comments on theatre semiotics and audience responses play well to my enjoyment of this type of reflexivity. The rest of the cast, and especially Jim Lichtscheidl, are wonderful. Despite the disaggregated strangeness of the work, there is an ensemble-coherence at play among the actors.

All in all, Nice Fish was one of the more enjoyable theatre experiences that I’ve had in many years. The absurdity that was the crux of much criticism of the work was the high point for me. So although I struggle to formulate a coherent response to it in intellectual terms at present, the sheer pleasure and exuberance of the piece make it one that I would like to revisit. And indeed, I have already booked to do so.