Martin Eve on The Man Who Knew Infinity

Professor Martin Eve on The Man Who Knew Infinity

On a flight to Kansas this week, where I was participating in a scholarly communications symposium, I watched The Man Who Knew Infinity (2016); a dramatisation of the life of the Indian mathematician Srinivasa Ramanujan as he travels to Cambridge and is eventually made a fellow of the Royal Society. I had previously encountered Ramanujan’s extraordinary story when I had seen A Disappearing Number, a devised dramatic piece by Théâtre de Complicité and it has stuck with me ever since.

Indeed, by any account, Ramanujan was an incredible individual. Completely self-taught with no formal degree education, he re-discovered, by himself, many of the complex cornerstones of modern mathematics. When he first wrote to the Cambridge mathematician, G. H. Hardy, in the early twentieth century it is said that the latter’s attention was caught by the extraordinary expression in Ramanujan’s letter that the divergent sum of all positive integers was equal to minus one twelfth (- 1/12). This is not addition in the conventional sense but is instead part of what is now known as zeta function regularization or Ramanujan summation (one of only many mathematical concepts now named after Ramanujan). 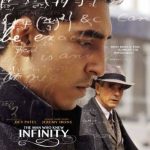 The Man Who Knew Infinity

The film focuses, in particular, on three elements: Ramanujan’s personal life; his work on partition theory with Hardy; and his relationship with Cambridge/England. In the case of the first of these elements, the film draws attention to Ramanujan’s wife Srimathi Janaki and the difficulties she faced, emotionally, in the separation from her husband (not to mention the social stigma entailed since Ramanujan had violated religious custom both by cutting his hair and by travelling overseas). In the film, this anguish of separation is heightened as Ramanujan’s mother blocks the correspondence between the pair (but I cannot find any readily accessible source that confirms this as truth).

The second is linked to Ramanujan’s work on partition theory with Hardy. Partitions (expressed as: p(n)) refer to the number of ways in which the number n can be represented (called “partitions”). As the example in the film shows, p(4)=5 because there are 5 ways of representing the number 4: 1.) 1+1+1+1; 2.) 1+1+2; 3.) 2+2; 4.) 3+1; and 5.) 4. This is all very well at p(4) but by p(100) there are 190,569,292 partitions. It is possible  to work these out laboriously by hand, but Ramanujan and Hardy came up with a function that had remarkable accuracy in determining p(n), even at high values such as 200. This is used to win over the (in the film) racist sceptic Major MacMahon who, by the end of the movie, declares Ramanujan to be the finest mind he has ever known and votes in his favour for nomination to the Royal Society (the first Indian appointment).

And this brings me to my third and final comment/thought on the film: the relationship between Ramanujan and Cambridge. It is quite clear, at least to me, that travelling to England killed Ramanujan at the age of 32. He developed TB and vitamin deficiency because he was vegetarian during a time of rationing in the First World War and he was particularly unsuited to the cold English winters. I think the film, which tries to shy away from overly romanticising the story, does a good job of showing the Empire at its worst in terms of its racism. But it doesn’t wholly bring home the brutality of the process. Just as Hardy insists on Ramanujan demonstrating the correctness of his work by the analytical proofs of occidental mathematics, against Ramanujan’s wishes (as he just seemed to “know” the truth of his own theorems/conjectures), the British country physically disciplines Ramanujan to his tragic early death.

I’m aware that, in the above, I have conflated the remarkable life, work, and reality of Srinivasa Ramanujan with the filmic presentation. I find it very difficult to avoid doing so. For the stunning insight that he possessed yields to me, every time I hear of his story, a great sense of personal loss, linked to a tract that Hardy later wrote called “A Mathematician’s Apology” [1940] on the aesthetics of mathematics. My professional background, before and during my specialisation in English Literature at universities, was as a computer programmer. I understand the aesthetics and beauty of a succinct and elegant algorithmic solution (and particularly those involving recursion). But I cannot communicate this to those who have not experienced it. It is an ineffable sense. Whenever I hear of, read, or see the story of The Man Who Knew Infinity, though, I experience one of the greatest personal regrets of my life: that I will never be able to see the beauty of pure, abstract mathematics for myself. I just am not wired to get it. I can only understand that such beauty does exist, beyond my world of experience or comprehension, but visible to those incredible few, such as Ramanujan.