Martin Eve on Ben Jonson, The Alchemist at The Barbican

Prof. Martin Eve on The Alchemist, by Ben Jonson, performed by the RSC at the Barbican Centre

Last weekend I saw a very fine production of Ben Jonson’s The Alchemist at the Barbican Centre.

This play, for those who don’t know, centres around the exploits of three con-artists who go by the aliases “Captain Face”, “Subtle”, and “Doll Common”. Face, though, is the butler to a gentleman who has fled his property in Blackfriars due to an outbreak of plague. Face (or Jeremy) uses his master’s absence as an opportunity to unite the con-men/con-women in the house and to exploit the local population. Over the course of the play, which in the RSC’s edited version runs for two and a half hours, the tricksters persuade multiple gullible characters to furnish them with wealth upfront so that they can supposedly produce the Philosopher’s Stone and transmute base metals into gold. The challenge for the villains, though, is that the master of the house eventually returns earlier than expected and catches them at it. Through a cunning set of manoeuvres, Jeremy just about manages to extricate himself from his master’s displeasure but only at the cost of alienating Subtle and Doll. 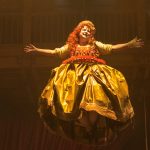 In dramatic terms, The Alchemist is a great play. It fulfils all of the classical unities, with its action occurring in one place, with one core plot line, in one well-defined period of time. But it also feels strangely reminiscent of more contemporary drama. The 60s farces of Joe Orton, for example, in which multiple sets of incompatible characters find themselves improbably flung together while the overwhelmed central figure tries to marshal the chaos.

In the RSC’s production, this sense of the contemporary was played up through a few clever gimmicks. At the play’s close, for example, just before Face gives his line “My part a little fell in this last scene”, the character stripped down to a Ramones T-shirt and did some quick calculations as to how much money the company had taken from the assembled audience at the Barbican Centre. Perhaps professional theatre is always a form of alchemy; from leaden spectators to gold. There was also a magnificent crocodile that hung from the ceiling of the set. This was, apparently, common in alchemists’ dens: the apothecary alligator. In the RSC’s production, though, the thieves lowered the beast and opened its jaws to use as a piggy bank for their ill-gotten gains. Thus, once more, there was a transmutation of purpose, even if this time it was, like the conmen’s activities, from high to low, rather than vice versa.

Yet, for me, the star of this show was Sir Epicure Mammon, whose lengthy rambling discourses on the food he will eat and the sex he will have once the Philosopher’s Stone is his were uproariously funny. For that’s one of the things I find interesting about the performance of seventeenth-century drama in contemporary London: the audience always has to start with an awkward laugh. There’s an initial scene where the characters are saying something that, to be honest, isn’t really that funny. Regardless of how loud the preceding speaker has been, it’s hard really to laugh at the line, two minutes into the play, “I wish you could advance your voice a little”. In fact, I’m always reminded of the Blackadder insult to Baldrick: “You’d laugh at a Shakespeare comedy”. And London audiences will oblige. They will give that awkward harrumphing chuckle to show that they are clued up and in on the act. They get it and want you to know. But by the time this production of The Alchemist was really rolling, this was all forgotten. It was actually funny and it didn’t seem so far removed from our own world, even if our own alchemists promise vast inheritances by email, instead of in plague-ridden houses. 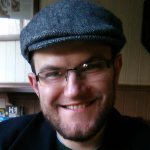