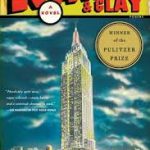 The Amazing Adventures of Kavalier & Clay

Michael Chabon’s third novel (2000) reimagines the origin of comic books and the superhero genre they inaugurated. In 1939, with Superman fresh on the newsstands, two Jewish teenage cousins create their own heroes. Sam Clay, the writer, is a Brooklyn boy with a knack for characters and scenarios; Joseph Kavalier, the artist, has a more dramatic history. He has arrived from Prague in flight from the Nazis, and dedicates his new life in New York to the attempt to save the family he left behind. Joe Kavalier brings to the book a Central European baggage heavier than its American scene: Kafka’s Prague (signalled in his name), the Jewish tradition of the Golem (an inspiration for new superheroes), musty traditions of stage magic and escapology. Joe has trained as an escape artist, which inspires the boys’ primary creation: The Escapist, a superhero with Houdini-like powers. Their other new heroes – Radio Wave, The Swift, Snowman, Luna Moth – are initially vividly imagined by Chabon, but are rather forgotten as the book progresses. The Escapist is the key franchise: once the comic strip is sold to Manhattan businessmen, the character also spawns a radio serial and other merchandise. The character concretizes the novel’s themes of escape; his adventures  are also intended as anti-Nazi propaganda, as Joe wishes to hasten America’s entry into the war.

Joe is somewhat distracted from this quest by his love for the young surrealist artist Rosa Saks, but when his younger brother is killed by a U-Boat he flees New York in a grieving rage, joins the Air Force and is posted to Antarctica. (These military scenes reminded me of Pynchon’s Gravity’s Rainbow.) Discharged from the forces, Joe wanders the USA and returns to live secretly in the Empire State Building, drafting a vast wordless comic about the Golem. Meanwhile Rosa has been bringing up Tommy, the child with which Joe left her pregnant, in a suburban marriage of convenience with Sam Clay – who is secretly gay, and has lost his own beloved to the war. Joe befriends Tommy and makes a dramatic return to their lives. Ultimately, Joe and Rosa are reunited and Sam leaves for Los Angeles, but with the suggestion that he and Joe will collaborate again on a new kind of comic book.

Reciting the novel’s events has reminded me of its melodramatic tendencies. It’s long, hence a kind of epic, but it’s also quite rip-roaring. It feels as though Chabon wants to stay in key with the comic book world, as much as any corpus of literary fiction. It’s relevant that its six sections have titles apt to the era – ‘Radioman’, ‘The League of the Golden Key’ – and even that the choices of cover art and font for this novel tend to conjure gaudy New York of mid-century postcards. Chabon writes elegantly and precisely, but also accessibly and without excessive challenge or obstacle. This novel may be a significant case in the shifting relations between high and low, or literary and genre fictions, in recent years. It comes closer than most fictions I’ve seen to genuinely crossing the divide or belonging to two generic worlds at once, rather than commenting on one genre from the detached space of another. The book is comparable to Jonathan Lethem’s almost contemporaneous The Fortress of Solitude (2003), which concerns comic book heroes in a later New York, with black-white race relations replacing Chabon’s Jewish themes. Yet Chabon is tonally different from Lethem. Although Chabon’s material – above all, the fate of Prague’s Jews – can inherently be dark, the novel as a whole has a cheerful lightness. A friend who remembered the novel added the word middlebrow. If that sounds harsh, is it because of comics’ traditionally lowly place in cultural hierarchies? Perhaps when comics bust out of the low-culture ghetto, they want to aspire to the heights, and to be represented in a ‘middlebrow’ fiction would represent a failure for that aspiration.

Or one could just appreciate Chabon’s energetic rendition of a mid-century Manhattan of new skyscrapers and midget radios. I was worried that this novel would end unhappily, and glad when it didn’t. A fond remembrance of superhero comics, it is also revisionist, first in the emphasis on Jewishness at their source: ‘Superman, you don’t think he’s Jewish? Coming over from the old country, changing his name like that. Clark Kent, only a Jew would pick a name like that for himself’. Secondly in the unconventional maneouvrings of the family of Sam, Joe, Rosa and Tommy. Sam’s homosexuality is brought into conflict with the moralizing crusades of Fredric Wertham’s Seduction of the Innocent in the McCarthyite 1950s, but seems set to find new liberation in California. Third, piquantly, in the suggestion that Kavalier and Clay are about to invent the adult graphic novel in the 1950s, rather than wait decades for Will Eisner and Alan Moore. The revaluation and reimagination of comic books suggested here is a cultural current to which Chabon’s novel itself makes a large contribution.