Lloyd Cole is playing Brooklyn Bowl. He once lived in New York but I don’t think this will remind him of his former home: it’s a bowling alley inside the o2 Arena. He tells us it feels like a reality TV set.

Lloyd Cole is a songwriter who started his career in the 1980s leading the Commotions, scored his closest things to hits then and is still associated with them by most of the world when it remembers who he is. Half the preview articles written on Lloyd Cole now are headed ‘Still causing a Commotion’. Another 25% are titled with a variant on getting ready to be heartbroken, after their first single. Cole bears this with good grace; he’s still happy to play his earliest songs. But he’s not in their thrall either, as Howard Jones or Mungo Jerry might be. The record he released in 2013 was as acclaimed as almost anything he’d done in the previous 30 years. 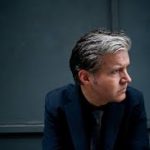 Lloyd Cole isn’t a retro artist but this is a retro tour: the songbook 1983-1996, coming in between two box set rereleases of Commotions and solo work. The first five songs tonight are all singles, but only Lloyd Cole fans really remember the fourth number ‘Weeping Wine’, though the original CD single bore a sticker saying ‘As seen on WOGAN’.

Lloyd Cole is singing a snatch of David Bowie’s ‘Sorrow’ over his own ‘Brand New Friend’, which gives me a rationale for writing this report in a topical stylistic homage to Paul Morley’s recent The Age of Bowie. I’m not sure that The Age of Lloyd Cole is coming soon but if Lloyd Cole writes it, I’ll read it.

Lloyd Cole is wearing, no, is ‘rocking double denim’, like a member of Del Amitri, which is appropriate as last week he played in a bandstand in Kelvingrove Park, in a downpour, on a double denim rock double bill with Justin Currie of Del Amitri.

Lloyd Cole is trading his sunburst Gibson Les Paul for a cream and black Telecaster that Bruce Springsteen might play. He is flanked by two guitarists, one disciplined, one willfully wild and noisy. Three electric guitars ought to give you a considerable palette but to be honest their sound isn’t as differentiated as I’d like; the noisy one sometimes still isn’t noisy enough for his solos to break through. But the electric Glaswegian Leopards are still welcome, as most Lloyd Cole shows are solo and acoustic if only for logistical reasons.

Lloyd Cole is making his customary joke about the average age of his audience. ‘These songs are all at least 20 years old … But looking at you, you’re not getting any younger yourselves’. I think he must say this at every Anglophone venue he visits. Somehow I don’t picture him saying it in Lisbon or Barcelona.

Lloyd Cole is inviting his son William on stage to play acoustic on two songs while The Leopards briefly depart. ‘After an exhaustive search, we found a guitarist who looks a little like I did as a young man’. Will Cole can play the acoustic lead on ‘Are You Ready To Be Heartbroken?’ better than people who have been trying to play it since before he was born.

Lloyd Cole is playing ‘Ice Cream Girl’ for the first time in 26 years. I think it’s my highlight: a song tucked away on his first solo LP, neglected all this time but so well constructed. It starts with just one or two guitars and in that breathing space their sweet phrases ring clearly.

Lloyd Cole is justifying his appearance on an English department blog by reliably singing his most quoted lines: ‘She reads Simone de Beauvoir / In her American circumstance’, ‘Read Norman Mailer / Or get a new tailor’, ‘It’s just a simple metaphor / It’s for a burning love’, and the ironic pay-off to all that from a few years later: ‘Baby, you’re too well-read’.

Lloyd Cole is. That is, he’s in the present tense, not a has-been, as people might unkindly have said when he was striving to meet major record labels’ demands in the 1990s. He managed to reset for the age of digital disruption, finding a way to keep making a dignified living purely from his catalogue of songs. The curious thing is, thousands of people still believe in the songs, and come out to see him, month after month. Lloyd Cole is more popular than you might think.