The American photographer William Eggleston (b.1939) became celebrated for his images of American people and places in the 1960s and 1970s. The National Portrait Gallery (from 21st July to 23rd October 2016) has assembled one hundred of his photographs: each of them featuring people, and hence fulfilling the gallery’s particular remit. The show is not very big, essentially filling three rooms, but it’s high in quality. Here are a few themes. 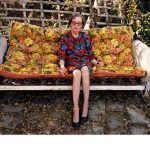 Identity: a lot of the people here are unnamed, so a photo of a parking attendant or passer-by is labeled ‘Memphis, late 1960s’ or the like. But several are named, as I gather they haven’t been before in public: so it’s newly explicit that the figures in a picture are Eggleston’s wife, or children, or friends, or children of friends. There is a certain sense of belated disclosure.

Presence: some subjects here don’t appear to know they’re being photographed. Several may have been strangers snapped unawares. But many are more truly portraits, asked to pose for the camera and looking boldly at it. Sometimes they seem to have come specially to a studio for this, but often it feels as though Eggleston was out somewhere with them and just asked them to turn to the camera. They seem to have paused normal life for a moment to take part in this formal exercise. I suppose these pictures remind me slightly of Gillian Wearing’s later sequence of strangers holding signs; but without the signs. Just the facial expressions and the histories we mostly don’t know.

Colour: lots of the pictures are black and white, and lots of those are very fine, but the colour photographs make the strongest impressions. Here are deep crimson and blue in crisp Autumn; blonde hair shining in golden early evening light; the green benches of a diner. Some colours are muted, some blaze bright. Someone with the history of photographic technology in mind might say more about how these colours reflected the state of the art, the gear and the techniques available to Eggleston. They might overlap with cinematic colour of the time, one source of our sense of that period now. The exhibition is being advertised especially by the image of the dancer Marcia Hare lying on the grass, camera in hand: magic hour light across the green and orange grass beneath her, the cream and rose of her dress.

Race: A majority of the photographic subjects are white, but quite a few are black, and the photographs can give glimpses of relations between white and non-white people in the Southern states at the time. Sometimes the black subjects seem wary or harassed; sometimes they appear impressively self-possessed. Again, though the photos are only hints of history, someone could probably produce an essay putting all this in its social context. Especially notable is the vast image of a white bourgeois followed with apparent deference by a black man. We are told that the white man was Eggleston’s uncle Ayden Schuyler Sr, accompanied by his long-time chauffeur and assistant Jasper Staples. The picture looks emblematic, suggesting a whole feature film, but also seems to have been just a piece of real life.

Period: however good Eggleston may have been at making pictures, one could now feel that he was blessed with the subject matter he had to hand. The outfits and hairstyles, automobiles and streetscapes of the American 1960s have long been among the iconography that most fascinates the world. Period dramas have codified the appeal. Eggleston only needs to point a camera at a shopping trolley, neon sign or fire hydrant to conjure time and place; their alchemy is greater still combined with these people who were there, bearing life stories of which the photographs can only, and only need to, give a glimpse. As well as the Mad Men 1960s, there is a distinct iconography of the US 1970s, of which Eggleston provides occasional reminders: the age of the Bicentennial and Close Encounters.

Stars: lastly, I’d not realised Eggleston was a countercultural type or rock hanger-on. Seeing Dennis Hopper turn up in a picture here is one thing, but Joe Strummer? The most persistent musical element here is Alex Chilton, who wrote and sang songs for Big Star. References to Chilton here felt like a surprising collision of worlds to me, but we’re reminded that Eggleston took the photograph on the sleeve of Big Star’s Radio City LP. Chilton himself appears in one picture, but it’s nothing like as compelling as the shot of Lesa Aldridge comforting Karen Chatham who had apparently just been let down by Chilton. Whatever the reality, it is unfathomable that Eggleston made this image from a transient late-night moment: it’s lit and composed like a Vermeer painting, and like Vermeer its frozen tableau evokes an ongoing story. You can see these pictures online, but it’s worth going to this terrific exhibition to experience them more fully.