Joseph Brooker on Philip K. Dick, A Maze of Death

Joseph Brooker on Philip K. Dick, A Maze of Death

The science fiction writer Philip K. Dick (1928-1982) published novels from the mid-1950s to the early 1980s, so A Maze of Death (1970) comes early in the second half of that career. Dick’s fictional universes are liable to crumble around his characters’ ears, revealing further universes beyond them, which are often enough whisked away in their turn. Sometimes the implications of this are political: the fiction may make a critique of the manufacture of consensus by media, state or corporation, often in the context of apocalyptic war. Often, especially in later Dick, the stakes appear more metaphysical, as theology comes to the fore. 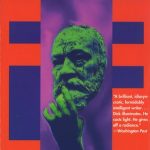 A Maze of Death reprises these motifs of ontological instability, with much theological baggage. Dick’s foreword explains that he and a collaborator have cobbled together a religion modeled on extant models, and this system is taken for granted by the characters for most of the book. One A.J. Specktowsky’s How I Rose From the Dead In My Spare Time and So Can You is regarded as the universe’s holy book, positing multiple theological entities including the Intercessor, the Mentufacturer and the entropic Form Destroyer. It feels characteristic of Dick – a welding of reverence and pulpy irony – to forge a new religion but attribute it to a title like Specktowsky’s, which sounds like mid-century self-help from a door-to-door salesman.

In this universe, a collection of disparate characters (with names including Ignatz Thugg, Susie Smart and Milton Babble) have all arrived at a tiny colony on an unknown world, Delmak-O. They await their mission from the authorities, but soon find radio contact cut off, then find their members mysteriously dying one by one. The narrative model now seems to be Agatha Christie; science fiction is crossed with the crime thriller as well as the theological treatise. When a team of characters goes out in search of a mysterious, seemingly mirage-like building, they each read the inscription above its door differently, suggesting that there are as many realities here as people to experience them. Twists and action sequences get into gear: by the time the prime protagonist Seth Morley was involved in a high-speed airborne chase shooting down a couple of leather-clad pursuers, I reflected that this would never happen in Henry James. Yet even these climactic scenes, in which Dick indulges a kind of space-opera capacity for derring-do, are finally trumped by a characteristic ontological breakdown. The entire world in which we have spent the novel is folded up and revealed to be the technological construct of a further world, occupied by the same characters.

The final mood is dark: what seemed to be the reconnaissance team on Delmak-O is actually the crew of a marooned spaceship, the Persus 9, fabricating a series of distinct collective hallucinations to pass the time. The bulk of the novel’s action is revealed to be equivalent to a multi-player computer game or virtual reality. The whole Specktowsky theology, it seems, was the invention of that world. But wait: Seth Morley encounters a figure, ‘Bearded, with flowing, pale robes’, who calls himself the Intercessor and blessedly spirits him away. So the invented religion was more real than they knew? Dick doesn’t pause to elaborate. Morley’s wife Mary returns to the next collective hallucination to get away from it all, and seems to be headed not to a new one but back to Delmak-O. The sense is seemingly of grim circularity.

The novel can be said to pivot on a ‘pocket universe’, in which, as the online Encyclopedia of Science Fiction suggests, ‘the world initially perceived seems to be the entire world’. The strategy has a strong presence in SF, but might also be considered available to fictional narrative more generally. The casual demolition of the world that has occupied nine tenths of the novel’s pages creates a certain effect of relativization. Were we foolishly misled, in taking the trouble to follow the details and dilemmas of a fictional world that the novel itself then swiftly dismisses? Or is this just a more explicit model of what we do with every fiction? Perhaps Dick’s final twist upon the twist is that we don’t, in fact, reliably get beyond the Delmak-O universe. The religion that seemed to belong to it seems to recur outside it, and it doesn’t seem that Mary Morley is going to leave it behind soon. Given another 50 pages, Dick would probably tell us that the Persus 9 was itself the product of someone’s imagination; as it is, of course, the product of Philip K. Dick’s.