Ghostbusters (1984) came from nowhere when I was a boy: a blockbuster whose scenario didn’t seem to resemble anything that preceded it. Perhaps it was a family-friendly adaptation of genuinely scary horror films about possession and exorcism. The film’s logo was iconic, and bits of its soundtrack were memorable if you knew someone who had the cassette. But I always thought of it as quite likably second-rank: a big hit, but not Star Wars, with no fanatical fanbase and no detailed alternate galaxy to get lost in. Ghostbusters II finally appeared in 1989; no one has ever told me they’ve seen it. 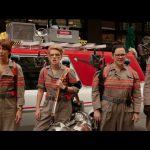 Ghostbusters (2016) reprises the 1984 film with four women instead of four men at its centre. It probably needs to be called ‘reboot’ (implying a clean slate) rather than ‘remake’ (perhaps implying the same elements repeated). The new protagonists partially recall the old, but also swerve away from them. Leslie Jones’ Patty picks up from Ernie Hudson’s Winston as an (I’m not sure it’s right to say ‘token’) African American team member, but her role is a lot bigger than his. Kristin Wiig’s Erin Gilbert corresponds roughly to Bill Murray’s Peter Venkman, and is dismissed from Columbia University as the original ghostbusters were, but her scatty and anxious character doesn’t resemble Venkman’s. Kate McKinnon’s Julia Holzmann presumably recalls Harold Ramis’s Spengler, but her attitude to the high technology she invents has a cool glee that belongs to the present era of geek chic. That the new characters have their own templates is good for the film’s autonomy.

Ghostbusters (2016) has one major flaw: as a contemporary summer blockbuster, it spends its last half hour in a CGI climax in which fairly anonymous monsters trample over Manhattan and are defeated by a fairly random barrage of lasers. There must have been a time when this stuff was still fresh – was it 1984? But the Avengers superhero movies, in particular, have made it as standard as the weather coming on at the end of the news. Times Square is now flattened at least once a year. It’s hard to recall that after 9/11 people thought we needed to be sensitive about this sort of thing. This element of Ghostbusters is a waste of time.

But before that there’s over an hour of more human-scale business as the protagonists come together and set up their paranormal investigation firm. The bulk of the film is this brisk comedy, which I started to think was brisker and funnier than the 1984 picture had been. When the team is pulled in by federal agents, one asks:

Agent: Do you have any idea how many federal regulations you are breaking on a daily basis?

Holtzmann: Is it one?

I think that’s brilliantly daffy, enabled by the happy mania of McKinnon as Holzmann. I don’t remember Murray or Dan Aykroyd saying anything much funnier.

The film’s apparent gimmick is that these ghostbusters are women. But its success is that that soon doesn’t seem a gimmick at all, but just the way things are in this story. There is never any fuss about the women either being scientists, businesswomen or action heroes wearing nuclear backpacks. Discussing the gender implications of anything from George Eliot to J.G. Ballard, Jean-Luc Godard to Britney Spears, it is customary to say that things are complicated, that progressive insights coexist with regrettable elements. I’d like to declare, with cheerful simplicity: this Ghostbusters isn’t like that. If its four strong women were all busting ghosts in their bikinis, it might belong in the problematic category. But they wear loose grey jumpsuits as Murray and Ramis did, and at no point is any of them, or any other woman, glamorized or sexually objectified. They do objectify their male receptionist, in a gender inversion that would bear more consideration. He’s ‘dumb’ as some equivalent women characters might once have been, but with a serene poise and oblique angle on life that allows him not to be a victim either. The women’s dialogue about him couldn’t pass the Bechdel Test, but their extensive discussions of imaginary technology do.

In one way it is laborious to say this, after decades of feminists talking about film. But not everything has improved in that time. I think this Ghostbusters might be the only Hollywood summer action blockbuster I’ve ever seen that has no net negative gender implications at all, that makes women central while not looking at any of them lasciviously. That should probably be unremarkable, but in reality it’s closer to miraculous. In that way this Ghostbusters manages to be a utopian gesture without needing to be that great a film.

The official trailer for Ghostbusters (2016) is here