Dystopian fiction pours off the presses in such volume that the apocalyptic vision has become codified and oddly routine. It’s the end of the world as we know it and we feel fine. But for all the dreary faux-Biblical solemnity of Cormac McCarthy’s The Road (awful!) or the banal humanism of Margaret Atwood’s Oryx and Crake (worse!), there are still places in the world where writing dystopia actually matters. 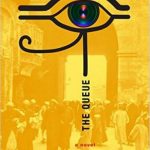 It is a remarkable act of bravery for Basma Abdel Aziz to publish The Queue in today’s Egypt, where after the overthrow of Mubarak and the toppling of the Muslim Brotherhood that replaced him, President el-Sisi has set about stabilizing matters with a repressive regime that has tightened political repression and particularly targeted writers and artists. The novelist Ahmed Naji was jailed in February 2016 for ‘violating public modesty’ with sex and drug references in a novel, a judgment that ignored the clauses in the Egyptian constitution that supposedly protects artistic freedom. The fearlessness of Basma Abdel Aziz – a journalist, activist, writer, and psychiatrist who has treated torture victims  — has led to her nickname ‘The Rebel.’ She refused to wear the hijab at university, loudly advocated women’s rights, and insisted on researching military and religious complicity in torture in spite of university attempts to block her.

The Queue, her first novel, was written in 2012 as the Muslim Brotherhood set about transforming every aspect of civic life in Egypt. It perhaps speaks even more urgently to the continuing curdling of the various Arab Springs across the Middle East today. The Queue is a vicious satire on state repression, where overt violence happens off-stage and is replaced by an everyday suffocation by bureaucracy.

In a nameless Middle Eastern city, not long after a failed uprising referred to only as the ‘Disgraceful Events’, the population must spend virtually their whole lives in a queue that never moves, waiting for government offices to open to process their paperwork and guarantee their status as True Citizens. Everyone is caught in the kinds of bureaucratic loop that recall Kafka’s The Trial: death by a thousand paper cuts. Mobile phones are routinely tapped and the transcripts of conversations produce mountains of paper for government agencies intent on spying on every exchange. Negotiating this ‘utopia of rules’ (to borrow David Graeber’s phrase) is most urgent for one of the central characters, who has the bureaucratic problem of a police bullet lodged in his body from the suppression of the uprising. He urgently needs medical attention, but must queue for his proper papers. Since the official account has erased all record of violent suppression, the bullet in his body cannot exist. He is slowly bleeding to death from something that must be unthought, in the classic Orwellian manner.

English PEN subsidised the translation, which adds another strong work to a vibrant writing scene of dystopian and surrealist fictions emerging from the region. Just as Stalinist repression fostered allegorical science fiction in the late, sclerotic days of the Soviet Union, Egypt has seen a number of texts using the same tactics of displacement, from Ahmed Khaled Towfik’s Utopia to Nael Elthoukhy’s Women of Karantina (set in Alexandria in 2064). Later this year should see the English publication of Ahmed Saadawi’s Frankenstein in Baghdad, which won the Arabic Fiction Prize in 2014, and which retells Shelley’s modern myth in post-occupation Iraq to brutal and brilliant effect. It will surely be considered one of the key literary fictions to emerge from the Iraq War once it is in circulation in the English-speaking world.

Genre tropes can do extraordinary things in extraordinary circumstances. As a way in to grasping the experience of our unfolding catastrophe, I’d really recommend starting with Aziz’s The Queue.

You can read more about Middle Eastern dystopias here

You can read an interview with Basma Abdel Aziz here 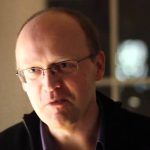