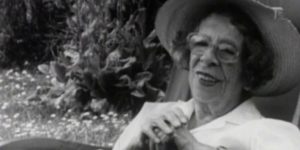 Register here for Day 2 of this two-day event exploring and celebrating the work and legacy of Lotte Eisner, author of the seminal text on Weimar silent film The Haunted Screen (orig.1952). A film critic, journalist and, for over thirty years, archivist at the Cinémathèque Française, Eisner, was born in Berlin in 1896 as the daughter of a wealthy assimilated Jewish family. She died in Paris in 1983, having fled there in 1933 and where she remained for the rest of her life.

Eisner spent her life and career writing about other people and collecting and archiving their work, first as a journalist in Berlin and then as an archivist in Paris. This symposium is an opportunity to focus entirely on Eisner’s own outstanding contribution to film history, from her early days writing for the Film-Kurier in Berlin, through her books, The Haunted Screen, FW Murnau (1964) and Fritz Lang (1976), to her extraordinary thirty-five year career collecting and archiving for the Cinémathèque Française.