Martin Eve on ‘The Ferryman’

Jez Butterworth’s previous play, Jerusalem, starring the irrepressible Mark Rylance, was a stage hit. After its gestation at the Royal Court, Jerusalem transferred to the West End and then to Broadway in the US, despite its main theme being old English mythology and its setting being a Hardy-esque alternative village in Somerset.

This weekend I saw Butterworth’s next play, The Ferryman, not at the Court, but also on its West End transfer to the Gielgud Theatre. I wondered, before, how it was going to be possible to equal his previous masterpiece. How could he match the epic scale of Jerusalem? How would the cast pull something off to rival the previous effort? 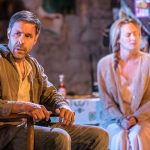 The Ferryman, directed by Sam Mendes, is set in Northern Ireland in 1981 amid the backdrop of the Troubles. The lead character, Quinn Carney, is a former IRA man, whose brother Seamus mysteriously vanished a decade earlier. His widow – although she doesn’t know of this status for certain until a way into the play itself – lives with Quinn and his wife Mary. This presence of Caitlin in the family home has had a devastating effect on Quinn and Mary’s relationship, as Caitlin and Quinn clearly long for each other, even though they have never acted upon their hidden but mutual desires. The extended family comes to stay for the harvest; a time supposed to be joyful and bursting with life.

The family peace of the harvest is shattered, though, by the discovery of Seamus’s body; tied up, shot through the head and left in a bog. The cowardly Father Horrigan breaks the news of the body but also warns of the impending visit of Mr Muldoon, the sinister IRA head honcho. Muldoon’s request is simple: when the news breaks of the body, Quinn must affirm that the IRA had nothing to do with it, although it is clear that they are entirely responsible for the death.

The Ferryman, then, becomes a play about truth and integrity, to the proximity of family and the distance of nation. Indeed, The Ferryman takes its title from Charon, the ferryman of the river Styx in Virgil’s rendition, who will not transport the unburied, since they have no coin in their mouths to pay his fee. Yet, so far as I can see and remember, Butterworth twists the words of the Priestess of Apollo (“There is no such duplicity here”) to imply that Charon also will not carry liars on the Stygian ferry. This is not the original context. Charon is suggesting, in Virgil’s rendition, that Aeneas’s wish to cross the Styx is noble, in opposition to Hercules’s previous attempt to steal Cerberus. In any case, Butterworth’s Charon will give rest neither to the unburied nor to liars.

Quinn’s dilemma then becomes: does he lie to save his family and besmirch the honour of his brother or honour his dead brother, remain true, and expose his family to potentially irreparable harm. Should his fidelity be to living family or to nation? This also comes with the challenge that he has already, to some extent, at least in terms of classical dramatic resonance with Claudio in Hamlet and others, demeaned his brother’s honour by longing for his wife. Eventually, Quinn makes his choice and it defies this simple divide: for his brother is both family and nation – the member of the IRA killed for supposed betrayal.

The Ferryman is also a play about the perpetuation of violence; the way in which younger generations absorb the fights of their fathers and find themselves repeating dangerous games. The strange and distant Aunt Maggie Faraway, for instance, tells a tale of banshees on a field surrounding Aunt Pat as she recovered the gun of her brother and took on the Republican cause. These same banshees seem to re-appear, alongside the foreshadowing of revenge and violence, in Maggie’s closing lines of the play: “They’re coming. They’re coming.”

Not everyone took to The Ferryman. Sean O’Hagan felt incensed by the “cliches and stereotypes of Irishness”, what he referred to as “the relentless drinking, the references to fairies, the Irish dancing, the dodgy priest, the spinster aunts – or the sense that the play ties itself in knots tackling ideas of place, loyalty and community”. Despite this, O’Hagan also points out, though, that the play draws “on the first-hand experience of Laura Donnelly, who plays Caitlin, and whose uncle was killed by the IRA in January 1981. Despite rumours that circulated about sightings of him, his body was accidentally uncovered in a bog across the border in May 1984. The vanishing at the heart of The Ferryman is, for Donnelly at least, a tangible one”. Yet, for O’Hagan, this play was perhaps “the sound of a mainly middle-class English audience having their cultural stereotypes confirmed rather than questioned”.

I am of that demographic, for sure, that perhaps did not question the difficulties of cultural representation in the work that can at once render it legible while also re-inscribing untrue preconceptions. But I thought The Ferryman was wonderful; the blend of dark laughter and complex character/political inter-relations for which I had hoped. Certainly, I thought some of the resonances throughout were too blunt: the goose having its neck wrung mirroring a later violent incident, for just one (also, note, that this play breaks the cardinal rules of theatre, containing both animals and children, in abundance). But for a three-hour and fifteen minute long play, I was spellbound. There seemed nothing superfluous and my attention wandered not even once.