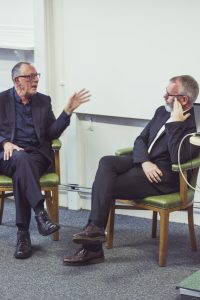 Comedy writer Ian Martin first came to public attention as the ‘swearing consultant’ for Armando Iannucci’s political satire The Thick of It (2005 – 2012). There’s a scene in the 2007 Thick of It special ‘Rise of the Nutters’ that perfectly illustrates the kind of custom-made baroque invective Ian brought to the series, when political enforcer Jamie (played with abusive gusto by Paul Higgins) rounds on weedy minion Ollie (Chris Addison) for slighting Jamie’s beloved Al Jolson:

You take the piss out of Jolson again and I will remove your i-Pod from its tiny nano-sheath and push it up your cock. And then I’ll plug some speakers up your arse and put it onto shuffle with my fucking fist. And every time I hear something which I don’t like, which will be every time that something comes on, I will skip to the next track by crushing your balls.

When I interviewed Ian Martin at the Lancaster Words festival in July 2017, he talked about how this speech came about. He was bedridden at the time following a lumber puncture, in severe pain, writing on a laptop propped up on his knees. And every time he finished a scene, he’d have to save the work onto a memory stick and – in those pre-superfast-broadband years – hobble to the next room to plug the drive into another computer and email the scene off. On this particular day the process was so exhausting, so dispiriting, the pain so awful that on reaching the second computer Ian poured all his rage and pain out into Jamie’s Al Jolson rant, changing what was in the original draft a straightforward put-down into a piece of sweary poetry.

And so, Ian Martin suggested during our conversation, the secret of good writing is ‘pain’.

But there’s another secret too, he added – ‘luck’ – and Ian was insistent on the role luck had played in his own writing life. It was luck, he said, that got him into journalism at a time when reporters were apprenticed and trained in the arts of speed and economy. Luck too that led to him writing columns for the Architects’ Journal and the Guardian. And luck that brought him to the attention of Armando Iannucci, who first contacted Ian after coming across his scabrous satirical website Martian FM.

But if I may be permitted to be a bit sweary myself for a moment: this is of course bollocks.

Ian Martin’s success as a comedy writer has little to do with luck and everything to do with his possession of a singular comic voice. That’s clearly what drew Iannucci to his work, enabling Ian to join the stable of writers working on Thick of It and later Veep (2012 – ), the HBO series chronicling the political life of fictional Vice-President Selina Meyer, played by Julia Louis-Dreyfus. Ian talked illuminatingly about the process of working on both shows, from initial meetings where showrunner Iannucci outlines general ideas about the direction he sees the characters and storylines going in, through ‘spit-balling’ sessions where the writing team put flesh on the bones of the stories, and on to scripting stage, where individual writers are assigned episodes, which then in turn go through draft after draft in a highly collaborative ongoing process, a process which indeed continues into the edit. I asked Ian when he knew an episode was actually finished. ‘When it’s broadcast’, he said.

A similar process has informed Ian’s next project, which again teams him with Armando Iannucci – and long-time collaborator David Schneider – in the adaptation of a French graphic novel about the death of Stalin and the machinations within the Kremlin to succeed him. Not the most obvious pitch for a comedy film, but then Ian Martin has never been one for the obvious. The Death of Stalin will be released later this year.

And I, for one, can’t fucking wait.