Joseph Brooker on H is for Hawk

Joseph Brooker on Helen Macdonald, H is for Hawk

Helen Macdonald is a writer on ecology and the history of science affiliated to the University of Cambridge. She is also an experienced falconer, who grew up fascinated by birds of prey and learned to handle and hunt with them. H is for Hawk (2014) is a memoir describing one period of Macdonald’s life, around 2007-2009. The period commences when Macdonald’s father, a seasoned photojournalist, dies suddenly of a heart attack. Macdonald’s grief is the basis of the rest of the book: sometimes its explicit subject, sometimes only implicit and unmentioned, but driving many of her feelings and actions in the period that follows.

Macdonald’s primary response to her grief is to purchase and train a goshawk, which she calls Mabel. Large parts of the book consist of descriptions of the hawk, the initial attempts to gain its trust, and later experiences of taking it out to fly and hunt, in Cambridge and its surrounding countryside. Across 300 pages, Macdonald is thus compelled to find many ways to describe her hawk, and the landscapes across which it swoops. 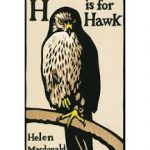 H is for Hawk

So the hawk is seen with its ‘café-au-lait front streaked thickly with cocoa-coloured teardrops, looking for all the world like some cappuccino samurai’ (65). Macdonald  often reuses the image of ‘teardrops’ to describe the hawk’s plumage: I’d grown used to this through the book but looking at it again, I wonder if it’s also an intentional recurring image for grief. Images of coffee and cocoa lead naturally in to ‘cappuccino samurai’, which I think is very fine: in its rhythm (the poise of three syllables coming after four), the happy collision of Italian and Japanese reference points, the sense of echo between the heavily vowelled two words, and the way that both seem also to point to something real: the bird’s colours and its fearsome posture.

Macdonald sees landscape very clearly too. On a train to London: ‘Papery skies. Glittering trees. A wash of backlit fields that folded and shrank as the city grew’ (214). A radio mast ‘looks like an ink-drawing’; Cambridge from a distance is ‘a chess-set town glittering among bare trees’; in a field lies ‘a broken silo on its side like a fallen rocket stage’; Macdonald sees ‘The maritime light of this island, set as it is under a sky mirrored and uplit by sea’ (238-9). There is much more where this came from. She is gifted and energetic at describing the animal and rural worlds.

The book contains some weak writing too. Just one example: when the credit crunch starts, Macdonald reflects that ‘When I was an undergraduate we were told that history had ended, and we all believed it. When the Berlin Wall fell, what history was made of was over. No more Cold War. No more wars’ (159). Really? I don’t ever remember anyone, of any age, being so credulous about such Fukuyama-for-Beginners pronouncements. If Macdonald was really taught this as uncomplicated fact, it doesn’t reflect very well on Cambridge. The trouble is not the historical judgement itself, but that the conceptual naiveté here badly inflects the prose. These sentences feel like the sarcastic reflections of a teenager, not of the experienced intellectual and gifted writer that Macdonald is. Too often she lets her style slip down a notch in this way, and the thought slackens with the style, just as it tautens when she writes well.

So the much-garlanded book can be frustratingly uneven. Macdonald writes powerfully about grief, but something remains puzzling about the exact causal relation between grief and training the goshawk. It seems to make sense that one could respond to a traumatic event by doing something radically different and challenging. But as Macdonald has spent decades flying falcons, training a goshawk – which would be a radical break from the norm for most of us – seems curiously like a busman’s holiday. Or, if falcons and goshawks differ that much, maybe like a taxi driver deciding to drive a bus. I’m not sure that she remarks on this.

The book’s other large element is an account of the author T.H. White and his own attempt to train a goshawk in the 1930s. I quite like books that work with other books, but I find the White material here excessive. It doesn’t seem to tell us much about Macdonald herself, nor even about hawks. It might have been just as interesting to say more about how she managed her academic duties or the rest of her life during this period of mourning.

Nonetheless, H is for Hawk is a significant example of contemporary nature writing: partly for its vivid descriptions of nature, partly for thinking extensively and critically about how humanity and the rest of nature interact with each other. Macdonald’s visit to an art exhibit on condors prompts powerful reflection on the difference between the animals we are intimate with and those we only see on screens, till ‘rarity is all they are made of’ (181). The human and the hawk, in history and in Macdonald’s life, are almost inseparable, yet as she finally sees, they are simultaneously alien to each other: ‘Their inhumanity is to be treasured because what they do has nothing to do with us at all’ (275).