Every year the Nobel Prize for Literature generates speculation, lobbying and betting. Some names come up repeatedly. This time Haruki Murakami was said to be surging, before shares in Don DeLillo rose sharply. I saw someone remark online that every year, a certain number of ‘morons’ lose money by backing Bob Dylan for the prize. Dylan is a venerable world figure who’s been in and out of the White House. As long ago as 1963 he was given the Tom Paine award by the National Emergency Civil Liberties Committee (in his acceptance speech he insulted the committee and said he could identify with Lee Harvey Oswald, who’d shot the President a month earlier); fifty years later France granted him the Légion d’Honneur. His candidacy for the Nobel has not, then, been in the same class as Gary Barlow’s. Yet he remained a left-field bet, simply because his participation in ‘literature’ at all is ambiguous. Yesterday he was awarded the prize. 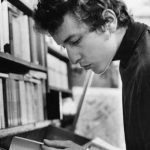 Some have celebrated. Some have doubts. I think I can see a few arguments against Dylan receiving this award. Literature needs publicity and acclaim; popular music doesn’t. Reading a novel (even one of the slim novellas of the later DeLillo) is harder work than listening to a song (even Dylan’s 11-minute ‘Desolation Row’). People who struggle to find an audience just with the printed word need some encouragement, which shouldn’t be wasted on those who’ve soaked up decades of adulation in arenas. Further, Dylan doesn’t need this award, financially or otherwise. In Pierre Bourdieu’s terms, Dylan curiously doesn’t really gain symbolic capital from the Nobel, as almost any poet or novelist on Earth would. The Onion imagines someone reacting to the news: ‘That’s cool. Although it’s probably the least cool thing he’s ever done’. And in terms of the potential benefit of the prize, we shouldn’t measure Dylan just against a few well-known American novelists, but against the sort of people who actually often win: writers in languages beyond globally hegemonic English, who are sometimes almost unknown in the Anglophone world, and who might welcome the spotlight on their nation.

The more fundamental case against the award is that Dylan doesn’t write literature. He’s a songwriter, and his work has been as much about music as about words. Attached to music and his own performance (or that of the hundreds who’ve covered his songs), his work gains an advantage that Alice Munro or Tomas Tranströmer have never enjoyed. So his entry for this award should only involve his words, in black and white, abstracted from music and melody: and thus isolated, they wouldn’t stand up.

I don’t really agree. For one thing, for many readers a lot of Dylan’s words would stand up on their own – as is implicit when we quote them in speech or writing. I have just picked up my copy of Dylan’s Writings and Drawings (compiled in 1973) and started flicking through the mid-1960s lyrics, thinking I would find primarily his surge of pop surrealism crowded with characters and cultural references, but I’m struck more by the memorable strength of individual phrases: ‘My love, she speaks like silence’; ‘died in battle or in vain’; ‘a thousand telephones that don’t ring’; ‘He built a fire on Main Street / And shot it full of holes’. But perhaps for me to try to gauge Dylan’s words in isolation is idle: I like these lines and many dozens more because I’ve heard him sing them – perhaps hundreds of times, each in multiple versions. So instead I’d say: scratch the whole idea of abstracting the lyrics from the songs, and accept what Dylan has done with language on its own terms, with his delivery included. Think of the voice as part of the literary achievement. This is, in fact, what happens with a lot of other writing. Seamus Heaney (Nobel Prize, 1995) may have been satisfied with his words on the page, but he also recorded a 15-CD box set of himself reading them all aloud. (As a result, he has the second largest number of tracks on my iTunes library – after Bob Dylan.) As for Harold Pinter (Nobel Prize, 2005), he spent most of his career not writing words to be read in black and white, but directions for what other people should do on a stage, words they should utter, and silences they should observe. He could hardly have protested that Dylan’s writing was too reliant on the externalities of voice and music. He might instead have accepted that Dylan, in his own way, had spent five decades being creative with words and making them exciting in a way that few could.

Dylan has one other qualification for the prize: he has written a major prose work. His memoir Chronicles, Volume One (2004) can be messy and meandering, but on page after page it throws off phrases that stop the traffic or make me laugh out loud. The poet Archibald MacLeish invites Dylan to collaborate on a play, and tells him he’s a ‘postwar Iron Age poet’ whose work ‘would be a touchstone for generations’. Perhaps MacLeish wouldn’t have been surprised by the Nobel announcement. Dylan remembers leaving the poet’s house:

Walking back over the small stream, it seemed like I was seeing the small ringlets of a river. Archie’s play was so heavy – so full of midnight murder. There was no way I could make its purpose mine, but it was great meeting him, a man who had reached the moon when most of us scarcely make it off the ground. In some ways, he taught me how to swim the Atlantic. I wanted to thank him but found it difficult. We waved at each other from the roadway and I knew I’d never see him again.