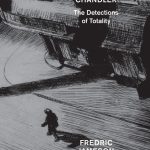 At ten o’clock I was in my office looking across at Fredric Jameson. I was listening to him too. He gave you a lot to listen to.

‘I find my neighbor unlocking his mailbox; I have never seen him before, we glance at each other briefly, his back is turned as he struggles with the larger magazines inside.’

Larger magazines? I let that pass and nodded.

‘Such an instant expresses in its fragmentary quality a profound truth about American life, in its perception of the stained carpets, the sand-filled spittoons, the poorly shutting glass doors, all testifying to the shadowy anonymity of a meeting place between the …’

I blinked a few times and tried to concentrate.

‘… a dreariness of waiting rooms and public bus stations, of the neglected places of collective living that fill up the interstices between the privileged compartments of middle-class living. Such a perception, it seems to me –‘

It was time to interrupt. He wasn’t making me feel thrilled about the state of my office.

‘Sorry about the carpet. It looks better in the dark, especially if you forget your torch. I hear they have nice bus stations in Oregon if you don’t like the ones in this town’.

He beamed, a big happy grin with no malice in it. This fellow was full of the joys of life. He started up again.

‘On the one hand those parts of the American scene which are as impersonal and seedy as public waiting rooms: run-down office buildings, the elevator with the spittoon and the elevator man sitting on a stool beside it –‘

‘You seem to have a thing about spittoons’, I said. ‘That’s your business. I find they’re best not looked into – most of the time’.

‘One is tempted’, Jameson said, ‘to make room for a kind of character whose “home” is his “office”, if you know what I mean’.

‘I know what you mean’, I said. ‘I’ve fallen asleep in here a few times myself. I might do it again soon’.

Another big Jameson smile. This guy was hard to offend.

‘So it is’, he started up again, ‘that little by little we begin to collect these episode-types … we juxtapose Harry Jones and George Anson Phillips (inept private detectives) –‘

Inept was one word for it. They were both dead, anyway. I’d found the bodies.

‘… and a new kind of stereoscopic reading emerges in which each scene retains its sharpness in our eye but designates a well-nigh Platonic (yet social-typological) ultimate unit behind it that the reading eye can no longer see as such but only intuit’.

When he brought Plato into it I started filling a pipe. Still, it felt like there was something in it. I did sometimes get my cases mixed up. The long window. Farewell, my goodbye. The big sister. The little sleep. Sometimes it did feel like I was following someone’s script. Unfortunately that someone wasn’t Shakespeare. It wasn’t even Carroll John Daly. A lot of the time, it felt more like something Mary Pickford’s teenage nephew would write if United Artists gave him an office and a typewriter as a favour to Miss Pickford.

I lit my pipe. Jameson was talking again.

‘… spaces of retreat and withdrawal which are somehow more analogous to offices than to houses or even quarters or apartments. There follows thereby a prodigious “metaphysical” or philosophical expansion of the category of the office per se …’.

He was interested in offices, all right. I looked around at the empty filing cabinets, the crooked clock, last year’s calendar. I wouldn’t have called it metaphysical, exactly, but some expansion wouldn’t hurt. Jameson liked his philosophy, though. He was talking about Nature. I wanted to say that if it was around here, what he thought looked like Nature was probably a theme park. Maybe that’s why he called it ‘what used to be called nature’. He was a smart guy. But he could get a little carried away. Now he was telling me that the sea was the ultimate kind of Nature. Maybe it was what used to be called the sea.

‘The sea itself … glitters with all that mineral fascination, that radically non-human, cold, even unnatural mystery that the ocean often has … The sea is here cleansed even of otherness’.

I guessed that if you wanted something cleansed, the sea might be a good place to do it. I didn’t bother asking him how you’d cleanse the sea. The boys at the Bureau of Beach Sanitation had been trying to do that for years, and it just kept coming back dirty, like a cheap shirt collar. Jameson knew a lot about offices, but I wondered if he knew about the pint of bourbon in my desk. I looked at the crooked clock. Ten-thirty. I was going to need a private audience with that pint, after half an hour with Fredric Jameson.