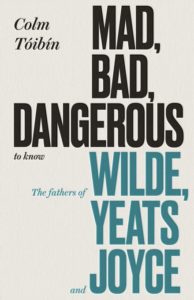 Colm Tóibín’s short book collects three essays published in the London Review of Books, and before that delivered as the Richard Ellmann lectures in Modern Literature at Emory University in Atlanta, Georgia. The Introduction is a charming evocation of the literary and social history of Dublin’s streets, which would seem a wholly new addition to the set, save that it also partially derives from an LRB essay on Samuel Beckett in 2007, itself previously given as a John Coffin Memorial Lecture. Tóibín has thus fulfilled Frank Kermode’s injunction that a writer should try to get paid at least three times for a piece of work. The book is not superfluous even for the dedicated LRB reader, though, as the essays here come in longer versions with sometimes intriguing additional material. Whether for this reason or due to the new context, I found them richer in book form.

The three essays treat Wilde, Yeats and Joyce in turn, making them resemble one of Ellmann’s own ventures in this format of prestige lecture and ensuing slim volume: Four Dubliners (1987). (The fourth Dubliner was Beckett, who makes his discreet appearance in Tóibín’s introduction.) Ellmann wrote full-scale biographies of all three writers: the design of Tóibín’s book thus seems in part explained by its origins in the Ellmann lectures. Tóibín’s angle is to write of them in relation to their fathers, whose own actions and words often dominate each essay. Sir William Wilde, a pioneering eye and ear surgeon in Victorian Dublin and a Renaissance man who conducted the Irish census and wrote books on archaeology, is shown to been if anything an even more substantial figure than his artistic son. In this case the mother, Jane Elgee aka the nationalist poet Speranza, was a major cultural presence also. John Butler Yeats, diverted from the law into drawing and painting, can’t be said to emerge as a more important talent than William Butler Yeats, but Tóibín’s many quotations from his letters do make plain his gift for voluminous, spontaneous, sometimes inspired opinion. Though Tóibín doesn’t say so, the three generations of fathers arguably show a declension; John Stanislaus Joyce managed to drink away a highly paid job and the fortune of a family that needed it, while producing no work that might begin to compensate for these failings. One exhibit in his defence might be his political work for the Parnellite cause, but those efforts could presumably have been matched by many others from the nationalist cadres of the time. The more typical case for his defence, reprised by Tóibín, is that his verbal wit fed into Joyce’s writing. That’s surely true, but it took James Joyce to cast the material for posterity. Unlike his younger brother Stanislaus, Tóibín reminds us, the novelist became indulgent of his father’s failings, assisted in this by living several countries away for the last three decades of his life. After reading Tóibín’s volume I don’t much share the indulgence, especially as the previous two fathers are so much more impressive than Joyce’s, so in the context of this particular book he seems even less accomplished than usual.

But Tóibín’s primary business is not with such value judgments but, more usefully perhaps, an analysis of how the powerful presence of each father was negotiated by each son. This sounds unpromisingly like Harold Bloom territory, but is more substantial because it’s a matter of real detail rather than interpretive fantasy – though it’s ill-served by the hyperbolic idiom of ‘killing’ the father that Tóibín uncritically picks up from Ellmann (pp.135-6), which doesn’t do justice to reality and its nuances. In each case it can be plausibly said that the latter generation in part used the resources and examples of the first, in part strongly differed from it. Joyce’s homage to John Stanislaus’s bar-room banter, while dedicating himself to art in Trieste and Paris, is one evident case. Oscar Wilde is shown to have enjoyed trips around rural sites with his father, in a way belied by his later reputation (pp.71-2); his career in writing plainly differed from Sir William’s in medicine and social policy. Some of W.B. Yeats’ thoughts appear almost directly derived from his father (who wrote in April 1913, for instance: ‘rhetoric expresses other people’s feelings, poetry one’s own’ [p.100]: a thought very close to one of the poet’s most familiar aphorisms), but his hard-headed determination to complete and publish so many works and undertake so many practical activities contrasts with a father who appears to have been almost physiologically incapable of completing a drawing. Thus, despite the evident differences between these three writers and their families, Tóibín does draw together quite a coherent case about inheritance and divergence.

As well as the slim volume from the prestige lecture series, this volume belongs to the genre of books that extensively recount information already available, much of which a reader in the field may already know. Facts and quotations are recounted from standard biographies by Ellmann and Roy Foster. When it comes to Ulysses, Tóibín spends much time simply recounting events and dialogue from the book, and winds up quoting and paraphrasing large chunks from a couple of Joyce’s later episodes (pp.170-1). The Joycean will find his statements and summaries largely correct (the one actual error to my eye is the assertion [p.12] that Leopold Bloom is accosted in Sweny’s pharmacy by Bantam Lyons, whereas the text places the encounter just outside it), but will also be aware that he is generally repeating what the primary text already says. This practice is less evident in Tóibín’s discussions of Wilde and Yeats, which are less literary, more fully biographical and father-centred. Here, knowing both writers’ complex lives less well than Joyce’s work, I encountered numerous facts new to me. Whether a more dedicated Wildean or Yeatsian scholar could say the same, I’m unsure. The scandal in which Sir William Wilde was publicly accused of sexual assault by Mary Travers was unknown to me till I first read Tóibín’s account, but it was prominent in Dublin at the time and is on the record. Perhaps more truly obscure is the peculiar epistolary relationship between the ageing John Butler Yeats and his friend Rosa Butt, daughter of the celebrated Irish barrister Isaac Butt. Yeats Senior lived in New York City from 1907 to 1922, dying the day after Ulysses was published. For many of those years he maintained a correspondence with Butt. He destroyed her half of it, as they had agreed; she preserved many of his letters. Tóibín recounts those from a reading of them in the Special Collections in Union College in Schenectady, New York (p.105). As far as I can tell, this is the substantial new research presented in his book, the textual information not previously available, which would explain why Tóibín presents it at such length. It has interest, but becomes monotonous in Yeats’s repetition, year after year, of fantasies about the two of them having married in youth. Tóibín points to a parallel between this long unrequited romance and William Butler Yeats’ unrequited longing for Maud Gonne; but the poet sublimated that into memorable art, a good deal more substantially than his father had managed.

Perhaps these tentative parallels and connections, rather than factual revelation, are the book’s real contribution. The parallel between Mary Travers’ furious pursuit of Sir William Wilde in the 1860s, and the Marquis of Queensberry’s of Oscar Wilde 30 years later, is thoroughly drawn (p.64). Isaac Butt, though a friend of Sir William Wilde in youth, represented Travers’ case in court: Tóibín sees a likeness with the prosecution of Wilde by Edward Carson, another momentous figure in modern Irish history. The Yeats family is convincingly compared to that of Henry James (pp.105-9), something that Tóibín assuredly knows a bit about. One of the book’s drollest moments is John Butler Yeats’ remark that the First World War was welcome at least for halting the production of Henry James’s memoirs (p.108). The links from all this to Joyce are less concrete – which is apt enough, both to Joyce’s drive for autonomy in exile and to his provenance from a different sector of Irish society. In the end, he shares with the other two a charismatic or infuriating father, but beyond that the detail is different.

Our era is properly alert to matters of representativeness and diversity. To write another book about Wilde is fine, but I would be reluctant to stage a panel discussion consisting of three men. In this context Tóibín’s book is almost parodically inappropriate: the equivalent of two all-male panels in a row, talking about each other. But this deserves to be viewed in the context of Tóibín’s work as a whole. He has written at length about women writers (whole short books on Augusta Gregory and Elizabeth Bishop), about mothers and aunts; and two of his most celebrated novels, Brooklyn and Nora Webster, are closely dedicated to the lives of Irish women. So the androcentrism of Mad, Bad, Dangerous to Know can be taken as a specific, strategic inquiry, rather than a reflection of myopia or insensitivity on its author’s part. Nonetheless I wondered if in another sense Tóibín had missed something about masculinity: put simply, how far his patriarchs conform to very standard patterns of behaviour that have historically been more typical of men than women. Tóibín does not adjudicate on the truth of Sir William Wilde’s scandal, but it centred on an allegation of sexual assault from a woman who had been in his care; if the equivalent assertions were made now, Wilde’s father would be likened to Harvey Weinstein. John Butler Yeats seems mostly harmless, but his endless dispatch of romantic epistles to a woman he never really intends even to meet again looks like a paradigm of the failure of commitment of which innumerable men have been accused. And John Stanislaus Joyce, a toper and talker who achieved less the longer he lived, could be a rambling regular in Cheers or Early Doors if not for the violent domestic tendencies that his sons observed. The first two of these men, at least, do deserve to be called extraordinary. But in their failures and foibles, the lives of all three can look rather familiar.