Just to the North of the old centre of Munich is an expanse of land hosting several major art galleries. They include the Alte Pinakothek (apparently holding Old Masters, though I’ve not been in), the Neue Pinakothek (an early-1980s building offering a substantial journey through 19th-century painting), the fabulously multicoloured exterior of the smaller Museum Brandhorst, and the Pinakothek der Moderne – the region’s major gallery of modern art, which I visited during a brief stop in the city. The building is an immense concrete block, yet its uncompromising physical character doesn’t make it feel brutal; it retains a great calm grey elegance. The doors from one part of the museum to another are so heavy they feel like a contribution to a day’s exercise, yet the round atrium at the centre provides another kind of lightness as it rises to an extraordinary circular ceiling, sky pouring through the glass.

The gallery’s divisions are diverse; I managed to see many of the contrasting elements making up its current displays. The basement holds a design museum in which cars are mounted for inspection: the sleekest among them a white Citroen DS comparable to the one Roland Barthes rhapsodized about in the 1950s. Modernist furniture seems to go on for miles: a minimal Frank Lloyd Wright stool, elegant chairs and dressers by Charles Rennie Mackintosh and his collaborators, and countless desks and bookshelves in styles somewhere between Bauhaus and 1960s Sweden, angled and shaped in ways that defy our typical expectations about these objects. A long vitrine holds smaller everyday items, notably a remarkable range of modernist coffeepots and tea sets. Some look like what a Vorticist tea party would have craved to drink out of in 1914, while actually dating back three or more decades before that; I’m surprised at how early these minimalist and angular signatures of the ‘modern’ were first written into household design. Stark typewriters that might have pleased Ezra Pound suggest an alternative aesthetic history of the writing machine. Audiophiles would savour the various record players, radios and stereos ranged through the basement, from portable gramophones to long cream hi-fi platforms from 1960s Italy.

After all this, the visitor is still to reach a memorable temporary attraction: Werner Aisslinger’s House of Wonders, a sort of playful model for utopia, with quirky domestic objects slowly cycling round a 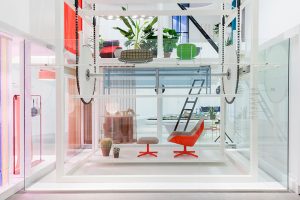 transparent elevator between levels. A bookshelf is made of books held together with bulldog clips. A stubby robot dressed in a colourfully knitted jumper poses with watering can, gardening the household plants of the future. Digital technology has been banished; all is deliberately analogue and tactile.

The ground floor incongruously offers a temporary exhibit of the Renaissance Dutch engraver Lucas van Leyden, beside another showing models for urban growth in the developing world. A single large room stages a confrontation between the abstract paintings of Fabienne Verdier (Mélodie du Réel, a kind of white waveform on black) and Sigmar Polke (cloudy monochrome smudges cut across by black squiggles). But it is the first floor’s more long-standing collection that really compels. Several rooms of modernist painting from the late 19th century on offer a rich series of works by major artists, with no guessing quite who will turn up next. Pained or vivid Expressionist figures, faces, animals and places recur, not least from Ernst Ludwig Kirchner. Muted brown-grey Cubist canvases by Braque and Picasso, as often, hang yards apart and are hard for the novice to distinguish. Picasso goes on through other garish phases. Salvador Dali and Max Ernst dominate as painting turns queasily surreal. A room of black and white portrait photographs of German avant-gardists of the Dada era feels decades ahead of its time. Another room holds a unique combination of diverse paintings from the Nazi period, whose complicity with the regime is hinted at – including a landscape showing the construction of a motorway bridge, and a classical pastiche depicting the four elements of nature as Aryan women. Beyond these in turn are the Abstract Expressionist swirls of De Kooning, the doodles of Cy Twombly (another link to Barthes, who tried to paint in a related style) and very late Warhol (an advert for Converse boots combined with a headline about AIDS, all topical in the mid-1980s), while Dan Flavin’s ‘Monuments for Tatlin’, pinned to the walls in fluorescent tubes, glow like the tops of old Manhattan skyscrapers. 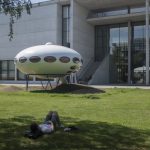 Outside, on the grass, one last space oddity: the Futuro House, advertised as a flying saucer in town. Designed as a ski lodge in 1965-7, the white bubble represents a 50-year-old fantasy of the future, a small mobile chunk of science fiction architecture. People lounge on the sunny ground around it, as though happy to welcome our new extra-terrestrial overlords.