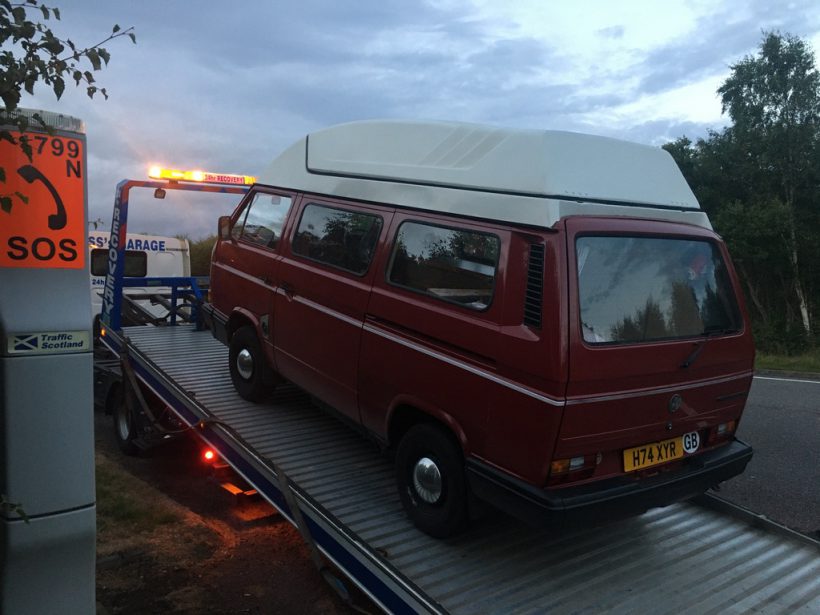 Having decided that I needed a campervan for my research trip around the UK’s micromuseums, I faced the problem of buying one.  Along with dogs, campervans had become the most wanted purchase of the pandemic and they sold almost as quickly as they were listed. I spent several months watching eBay and prevaricating while the prices rose and higher until finally, I emptied out my bank account and swooped, buying a 1990 VW Holdsworth conversion. It had the doubtful distinction of a rose pink and beige floral interior (think late 1980s Laura Ashley living room) but it was advertised as ‘ready for camping’ and running like ‘a finely tuned watch’. Over the next four weeks the van broke down five times, twice on the way home.

The first time was ten miles up the road when a warning light went off. I rang the seller who drove after me and fixed the problem. It then refused to start. That was fixed too. The second time was an hour later when the petrol gauge swung ominously from half full to zero. I managed get to the edge of the nearest town where the van ground to halt outside a petrol station. I filled it up, only for petrol to start leaking across the forecourt. I tried to move the van but again it refused to start. This time two things had gone wrong. There was a leak in the tank and the petrol in the tank was months old and had coagulated, so when I ran it on empty the sediment had been dragged through the engine. I abandoned the van in the adjacent Morrison’s carpark and the seller picked it up at 5am the following morning. He was embarrassed by the vehicle’s failings and agreed to put them right.

Two weeks later I went to pick up my newly MOT’d campervan, which I drove without a hitch to Manchester, to the Museum of North Craven Life in Settle, and then up to Cumbria, where I have been living for the last year. All went well. A few days later I set off for Glasgow to visit the Women’s Library and Museum. Thirty miles before I reached the city the engine started juddering and lost acceleration. I limped it along the hard shoulder with the hazard lights flashing and into another garage where it subsequently failed to start at all. The owner of the garage repaired the starter motor, but the other problem was harder to identify. Modern vehicles can be plugged into a computer which identifies the fault. Diagnosing faults in vintage vehicles requires the mechanic to work through the possibilities, which takes time and costs money. And, as the owner of the garage pointed out, we’re not used to working on such old vehicles. He thought it might be the fuel distributor which was duly upgraded. Off I went again, the engine purring, heading to the far north where I was due to visit Gairloch Museum and the Laidhay Croft Museum. As I started across the Cairngorms it broke down for the fourth time. The juddering started again, I was losing speed, and the massive artic trucks behind me were getting ominously close. This time the AA came to the rescue and accompanied my limping vehicle to Blair Atholl garage where another mechanic diagnosed an ancient and faulty coil. It was Thursday night. The new piece would arrive on Monday afternoon. I settled down to wait.

Four days later I was off again and just south of Inverness the same thing happened. This time the AA put me in a taxi headed for Glasgow. I spent a night in the Premier Inn and then drove a hire car home with the van following on a trailer. By this point I was feeling pretty low. After months of being inside I’d been looking forward to travelling and seeing some new places. I was keen to get on with my work and excited to meet the people who had founded museums. And I’d spent all my savings on the van. I had a bad-tempered conversation with the seller.

Then social media came to the rescue with a recommendation for Mac VW in Manchester. The garage was down a warren of back streets and industrial buildings, and it was stuffed with vintage VWs in various states of disrepair. My 1990 vehicle was the most recent model they worked on, and Steff, the owner, quickly diagnosed the fault: the fuel filter had been fitted back to front and it was so tightly clamped that the flow was doubly restricted. ‘How much did you pay for repairs?’ he asked and flinched at the response. ‘It’s embarrassing’ he said, ‘a new filter costs £1.25 and it took ten minutes: it’s the problem with going to see general mechanics’. Still anxious, I did two laps of the M60 which orbits Greater Manchester before driving home to Cumbria. I’d only been in the house a few minutes when Steff called. ‘Was it OK?’ he asked, ‘Yes’ I said. ‘I knew it’d be fine’, he replied. ‘You’re all right to set off for Scotland now’.

One thought on “The Mapping Museums Campervan tour: a catalogue of mechanical collapse”