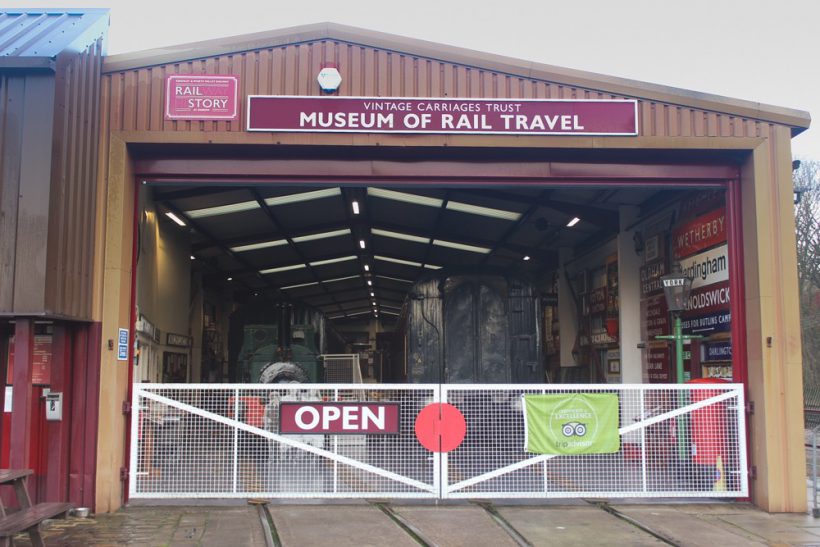 The Museum of Rail Travel is devoted to railway carriages through the ages. It is run by the Vintage Carriages Trust, formed in 1965 by a group of volunteers interested in the preservation of wooden-bodied carriages, and now has nine historic railway carriages, three small steam locomotives, a railbus and a large collection of railway signs, posters and magazines. Visitors can enter the carriages and numerous films have been shot using the carriages as a film set, including the Railway Children.

The Museum is on the outskirts of Keighley in West Yorkshire, adjacent to Ingrow West railway station and Ingrow Loco Museum. The station is part of Keighley and Worth Valley Railway (KWVR), a five-mile long heritage railway that runs to Oxenhope reopened by the KWVR Preservation Society in 1968, the first privatisation of any part of British Railways. The Museum of Rail Travel is in a purpose-built carriage works/museum with sets of rails connecting it to the adjacent railway. The building is divided into two main sections – a museum space containing a series of historic carriages, signs and displays and a large workshop area devoted to carriage repair and restoration. The building also contains a well-stocked shop selling new and second-hand railway enthusiast books and a substantial collection of railway magazines and journals (13,000), which are for sale and are an important income stream for the Trust.

Visitors can sit in many of the carriage compartments and stickers on windows of the carriages detail films the carriage has featured in, listing the title, year made, stars and location of the carriage for filming. Somewhat surprisingly many of the mannequins featured in displays are, on close examination, incognito members of the royal family. A young queen is off to Brighton and Princess Margaret sits on a station bench in a scarf and enormous sunglasses.

Text and photographs by Toby Butler