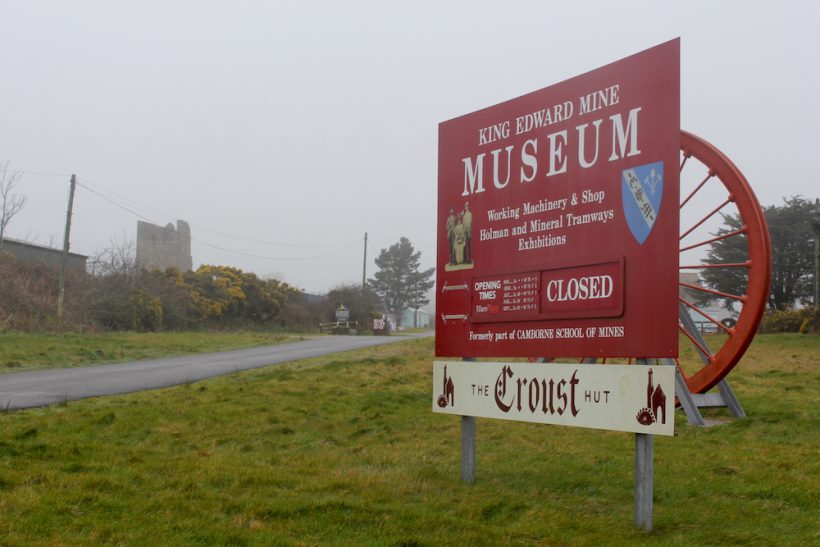 King Edward Mine Museum interprets the history of Cornish mining on the site of a tin mine used by the Camborne School of Mines for training from 1897. The School moved to Poole in the 1970s leaving many of the buildings redundant. The King Edward Mine Preservation Group was set up in 1987 to preserve the buildings and collect, restore and display industrial machinery used by the Cornish mining industry by a group of volunteers (initially mostly staff from the Camborne School of Mines). The project has received major European and Lottery funding and is now part of a UNESCO World Heritage Site (2006).

A private road leads to the mine complex, which is remarkably complete and includes an array of workshops and historic industrial buildings, several of which are now listed, and a popular café. Several buildings on the site have been converted for small business use. It includes an Edwardian lecture room, complete with rock samples and books, although this is not currently part of the public exhibition.

The museum first opened in 2005 and now has displays over several buildings. A stone-built Boiler House (1906) contains contextual displays on the people and land surrounding the mine, and covers social history, archaeology, geology and the history of tin mining, mostly with the use of illustrated display boards addressing questions about mining (e.g. “was it dangerous or unhealthy for children to work at the mines?”) with some related objects, mostly in cases and video/audio displays (one speaker is memorably installed in a Cornish pasty which can be lifted to the ear). The winder and compressor house contain displays on winding machinery and drilling, along with explanations of the various processes carried out to extract tin at the mine in the Edwardian period. The displays range from large machinery with detailed and illustrated explanation on information panels, to objects and models in cases, often making use of extensive archive photographs of the site and the machinery. A large corrugated iron clad mill building contains an array of working machinery, much of which has been restored to working condition and visitors can see it in action, including enormous stamping machines used to crush rock.

The founder of the museum Tony Brooks has published an illustrated history of the mine, including a section on the early preservation work King Edward Mine: An Illustrated Account of Underground and Surface Operations 1897-2001 (Cornish Hillside Publications, 2002).

Text and pictures by Toby Butler