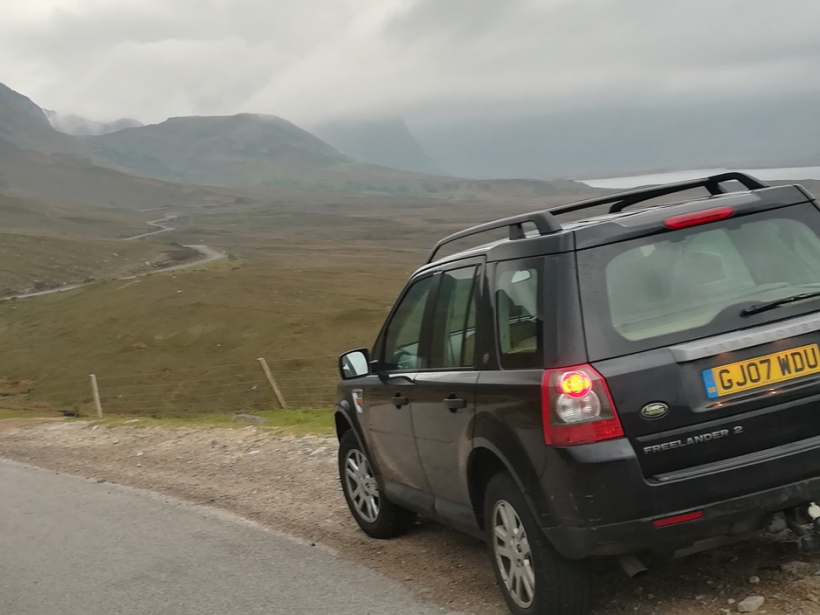 (Header photo: Toby’s car parked on the single track road on the way to Gairloch)

I have driven the length and breadth of Britain for Mapping Museums to complete one of the most rewarding tasks on the project – interviewing people who have set up independent museums. I have now recorded more than 60 museum founders and in the process I have driven 5,870 miles to meet them and it’s time to reflect on the trials and tribulations of life on the road as an academic field researcher.

First there is the driving. We felt it was important to get as wider geographical demographic spread as possible, and as many museums were in remote locations the car was the only practical option. I visited and photographed 40 museums, which in itself was a joy, but along the way I also got to see some stunning parts of Britain  that were new to me – redundant mills in Lancashire; the snow swept Yorkshire Dales in December; the ruins of World War II airfields in Lincolnshire. I kicked myself for not exploring these areas before, all just a few hours’ drive away from my own home in Kent.

The luxury of a car also meant I could take as much equipment and luggage as I liked. For each trip I would carefully go through my packing list: laptop and digital recording equipment for interviews, notepad and paperwork, SLR camera for photographing museums inside and out, battery chargers, folding bicycle (for exercise and to give me a break from the car), a thermos flask for in-transit tea, wellies and two coats along with the usual clothes and toiletries. I also had room for a couple of bulky luxuries to make life on the road easier; firstly a four gang extension lead, with various chargers attached, perfect for charging all my equipment in rooms with few plug sockets. And finally my own feather pillow, which pretty much guaranteed me a good night’s sleep.

Between interviews life on the road was solitary, apart from the odd hitchhiker and a few days when my path crossed with Jake, my project colleague who was researching some of the underlying causes of museum development in Cornwall. In the car the radio and downloaded BBC Sounds programmes were my main companion – along with the scenery. This was most spectacular in the Highlands of Scotland, which I criss-crossed to make meetings with founders of croft and clan museums. Many of the small museums in the Highlands (such as Laidhay Croft Museum and Gairloch Heritage Museum) hug the coast road, often single track, with passing places to allow other vehicles to get by. and astonishing views of lochs, mountains, cliffs and ancient peat bogs. The bright gorse flowers were made even brighter by sunshine in an unseasonal heatwave (‘Auch, it’s always like this in Scotland’, I was told several times).

Much of this work fell over the winter months, when many smaller museums have shut their doors and the people who run them have more time to talk. The week before Christmas I experienced the childish excitement of a snow flurry in Pateley Bridge, a picturesque little town in the Yorkshire Moors. I was there to interview Eileen Burgess, the 89-year old retired school teacher and co-founder of Nidderdale Museum (a huge local history museum in what was once the town workhouse). I stayed above a pub and after work went for a snowy walk in the upper dale. That evening I joined the town’s Christmas fair wandering from shop to shop to be offered mulled wine and Christmas nibbles – so warmly welcomed that for an evening I felt like an honorary Yorkshireman.

The hardest weather was at Land’s End. I needed to get to the Isles of Scilly and there had been a long period of gale force winds and even supply boats hadn’t got through to the islands for a week. A morning flight from a Cornish airfield was my only option. I stayed at the Land’s End Hotel the night before; the hotel is on the cliffs next to the famous landmark. Before I went to bed I ventured out and could see huge waves crashing on the shore below. The wind howled all night. The next day I discovered that a crew of French fisherman had been rescued from a fishing boat caught up on the rocks below.

The next morning the wind was still gusty, but the direction was favourable for flying and I was relieved to get a call from the airport to say the flight was possible. But they warned that the unpredictable forecast meant they couldn’t guarantee the return journey and I would have to risk getting stranded on the Isles of Scilly. I had a tight interview schedule and I had driven so far; I decided to risk it.

After a frankly terrifying flight on the sort of small plane that has a passenger sat next to the pilot, I had a few hours to interview Richard Larne, author, wreck diver and founder of the Charlestown Shipwreck Centre. After a fascinating interview in a café in St Mary’s, I got an urgent call from the airport recommending I get the next flight before the weather turned. Richard kindly agreed to rush me to the airport in his car for an even bumpier flight back to the mainland (as it turned out, this was indeed the last flight for some days). When we landed with a thump I gave a cheer, along with the five other passengers. Now all was well and we were both very relieved; Richard had narrowly escaped an uninvited house guest for who knows how long, and I could make my next interview on time. And so the extraordinary journey continued – next up would be Tony Brooks, ex-head of mining at Camborne School of Mines and the founder of the King Edward Mine Museum. I’ll discuss the wonderful array of project interviewees in my next post.

2 thoughts on “On the road with the Mapping Museums Project”