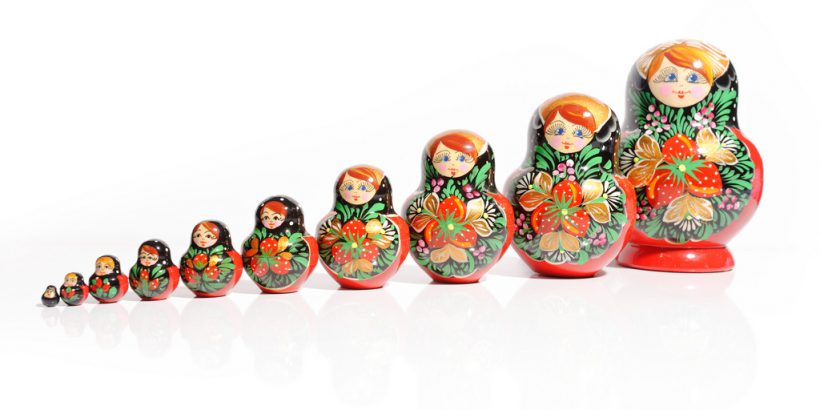 What is a small museum? Or for that matter a medium or large museum? In the museum sector, size is generally measured in relation to visitor numbers, and in cases where several criteria are used, such as income or staff numbers, they are still taken into account. The Mapping Museums research team has followed suit in this respect. We decided to group the museums within our dataset into size categories that are based on visitor numbers. Thus the question for us was: how should we establish the thresholds for these categories? How many visitors equate to small, medium, and large? And should we just use those three categories? What about very tiny or really massive museums?

Arts organisations define size in slightly different ways, and in some cases, single organisations may use a variety of measures. For example, the Association of Independent Museums (AIM) uses the following categories in their ‘toolkit’:

However, AIM uses slightly different bands when museums are applying for membership. In this case, the smallest category is defined as being up to 20,000, not 10,000, and there is an additional category of ‘largest museums’, which attract over 100,000 visitors. Arts Council England (ACE) data uses the same measures as the AIM toolkit, but only in relation to independent museums. When they assess the size of local authority museums, they use a different yardstick:

These differences are sensitive to the realities of museum practice. By categorising museums that have less than 20,000 visitors as being small for the purposes of membership, AIM enables more organisations to pay the lower rates of subscription than if it had put the bar at 10,000 visitors. Similarly, ACE recognise that local authority and independent museums operate under different conditions. For the Mapping Museums team, however, the use of different size bands was problematic because it would be difficult to know how to categorise museums that have hybrid forms of governance, for instance, when local authorities retain ownership of museum buildings and collections but outsource its management. Using different size categories according to governance, also meant we would have to change size designations when museums changed status, and it also prevented any direct comparisons across categories of governance.

In the absence of an established rubric for museum size, we needed to decide what size bands to use in the Mapping Museums research. In order to first make that decision we looked to the data and at the overall spread of museums according to visitor numbers.

At this point, we had no visitor numbers for 45% of the museums in our dataset. However, when we plotted the information that was available to us (Figure 1), we could see that there was a clear peak in the data between 10,000 and 32,000 visits per year (with median about 13,000), but that there were no obvious points where the distribution of museums divided into bands. Thus the data did not suggest any clear categories for allocating size.

We then divided the distribution into quartiles, which showed that 50% of museums had between about 4,000 and 40,000 visitors per year (Figure 2).

One option was to create a band that covered the broad group of museums that gain between 4,000 and 40,000 visitors. The problem was that approach would elide the significant differences in scale. A museum that gains 4,000 visitors per year is likely to be run solely by volunteers or by a private individual, with limited opening, and to operate in a relatively ad-hoc fashion. A museum that attracts 40,000 visitors is reasonably well established and likely to have a professional orientation. Thus, grouping these museums did not make sense in an analytic context.

Our next step was to consider how various size categories would support our research. One of the problems of using three bands for sizing is that it lacks nuance. A museum that has 100,000 visitors is clearly very popular and well established but it is not in the same league as one that has visitors in the millions, yet both would normally be classified as ‘large’. Thus we initially decided to introduce more categories (see Table 1).

This approach initially seemed to work. However, when we began detailed analysis of the data the researchers found that they were constantly aggregating the three smallest categories. We did not need that degree of nuance for our work. However, we regularly used the category of ‘huge’ as a way of filtering out the very largest of institutions. Thus we decided to revert to a single category for small museums but to keep ‘huge’.

Our second set of categories, which we are now using, reads: small, medium, large, and huge. Yet the question remained of where the thresholds would be set for each category. Again we turned to the data, and looked at how the distribution of museums would change if we used 10,000 or 20,000 visitors as the top limit for the category of small, and what difference it would make if 50,000 or 100,000 were used as the upper limit for ‘medium’.

As Table 2 shows, splitting small and medium at 20,000 means that the former category is significantly larger than the later. Splitting the categories at 10,000 produces a more balanced distribution between the two. In both these figures the category of large has relatively few museums because it only includes organisations with over 100,000 visitors. When that threshold is dropped to 50,000, then the size of that category almost doubles.

Importantly, the different size categorisations give a very different impression of the UK museum sector. If small museums predominate then we might assume that the sector is dominated by museums that attract few visitors, are volunteer-run museums or have few paid staff, and that possibly are struggling to survive. In contrast, if there are larger numbers of museums of a medium size, then the sector seems to be more comfortably established, and, if there are high numbers of large museums, then onlookers may conclude that it is flourishing. Thus size categorisations can have a strong impact on perceptions of the sector, even if the actual visitor numbers and lived realities of museum practice remain the same throughout.

After considerable discussion the Mapping Museums team decided to set the size categories as follows (Table 3):

For us, these categories chimed reasonably closely with norms of thinking about museum size, and are similar to those used by the AIM toolkit, which has the advantage of making them familiar within the sector. They lack nuance in the category of ‘large’, but this is not a particular issue for our research, as the focus of Mapping Museums is on smaller museums. Setting the bar at 10,000 also means that small museums do not merge into medium-sized, more established organisations, and we can examine them as a distinct group. For us, this is important because the smallest museums are often sidelined both in research and in professional discussions.

One thought on “How big is that museum?”