There is a limit to how much information can be unearthed online or from an archive. Over the last year, the Mapping Museums research team has compiled a mammoth list of museums that were open in the UK between 1960 and 2020. We have used various sources to cross check their details, but there are some particulars that can be hard to find or verify. And so, we asked the Museum Development Network for their assistance.

The Museum Development Network consists of twelve groups, one apiece in Northern Ireland, Wales, and Scotland, and one in each of the nine regions of England. Although the groups all function slightly differently, they all support accredited museums, advise on the accreditation process, and provide relevant information to Arts Council England and other national organisations. They also allocate their own grants, run projects, and help improve services and their members’ skills. In doing so, the museum development officers quickly acquire a fine-grained knowledge of their local museums. We wanted to refine our data by tapping their expertise.

With the support of Claire Browne, the network chair, we arranged to visit staff in each country or region. On each occasion, we arrived with a list of the museums of that area and slowly worked our way through the data, line by line. We had asked the museum development officers to look out for any information that we may have missed and they pointed to a number of instances where the local authority had transferred responsibility for a museum to an independent trust. They also noticed some duplicate entries that had resulted when a museum’s name had been changed, and spotted instances when museums had moved premises, amalgamated with neighbouring venues, or had recently closed. We deleted or edited the entries as appropriate. 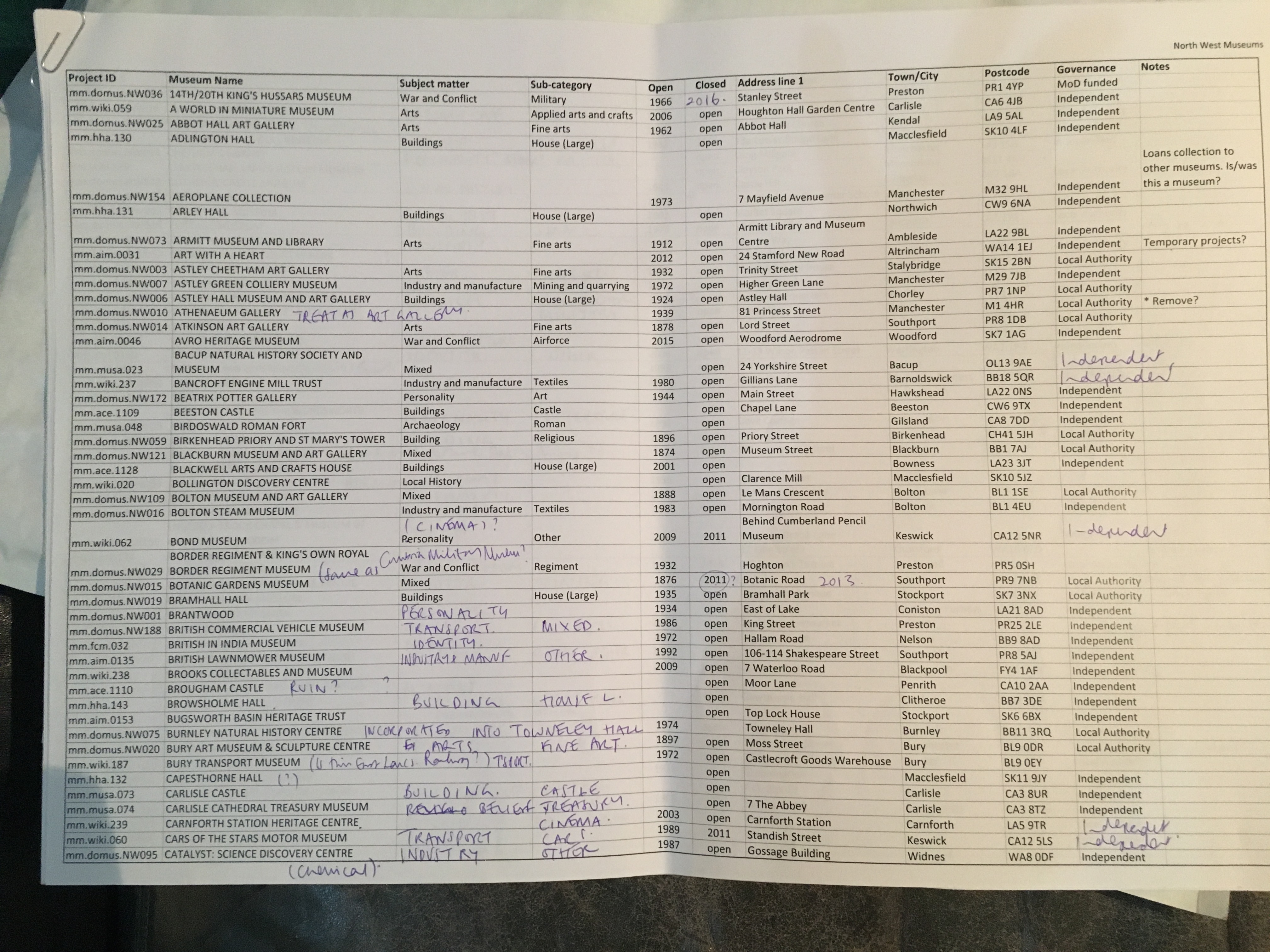 The Museum Development Network helped us fine-tune our data and they also contributed to our research by helping us classify museums according to their subject. In most cases, the main topic of a museum is fairly obvious: as one might expect, the Lapworth Museum of Geology concentrates on rocks of varying types, while the Bakelite Museum has a collections of plastic, but the theme of a museum is not always so self-evident. For example, Carnforth Station provided the set for Brief Encounter, and its Heritage Centre focuses on the film, not on railways or trains, while the Deaf Museum and Archive in Warrington is more concerned with the community than with health or medicine. Being familiar with these venues, the museum development officers could make a nuanced judgement as to their overarching subject matter, whereas the research team would have to spend a considerable length of time checking webpages, catalogues, and other sources to make a judgement. Their input saved us weeks of work. It was also good to establish that our new classification system worked smoothly, although the absence of a ‘social history’ category did cause some consternation. For us, the problem with ‘social history’ is that it applies to such a large number of venues that it lacks nuance. In the DOMUS survey, conducted in the 1990s, almost a third of museums were listed under this category, which makes it almost unusable for research purposes.

Holding the meetings served to further refine our data, and it also had benefits for the museum development network. Many of the officers said that they rarely got an opportunity to discuss the museums in their region, and that it was useful to do so. Others thought that going through the list was akin to a quiz on their museums, and had been fun. Almost everyone commented that the Mapping Museums team had identified numerous museums that they had never encountered, and that our data would inform their work, particularly with respect to unaccredited museums.

Ultimately, the experience was incredibly productive. It was a pleasure to meet such a dedicated and knowledgeable group of people. We are very much looking forward to the point when we can provide them, and others, with the completed data.