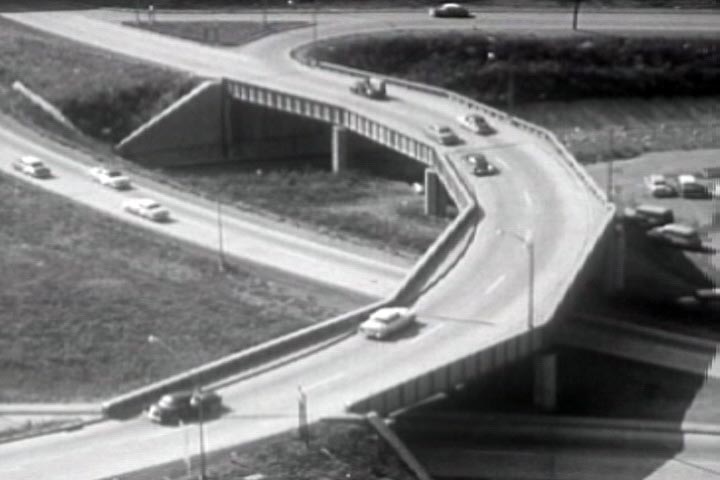 Over the course of three days, the third edition of the BIMI-PITT Research Workshop, a joint venture between the Birkbeck Institute for the Moving Image and the University of Pittsburgh to share and develop research, covered a wide range of subjects, all based around the notion of displacement. For the fifth panel, Displacing Communities, John Taylor and William Ackah took the theme of displacement at its most literal, focusing on the countless people, homes, and communities that have been removed, destroyed, or divided by US government social policy in the 1950s and 1960s, namely the construction of the Interstate Highway System and urban redevelopment in the inner cities.

Whilst Taylor does link his talk about the construction of the US Interstate Highway with Hollywood cinema, in particular what he dubs as Highway Horror films such as Psycho, dir. by Alfred Hitchcock (USA, 1960) and The Texas Chainsaw Massacre, dir. by Tobe Hooper (USA, 1974) which warn of the danger of coming off the highway, his main focus are government and corporate sponsored public information films made during the 1950s and 1960s which posit an ideology of progress, modernity, and social mobility. One of the most revealing was Highway Hearing, produced by Dow Chemicals (1956), where concerned townsfolk would listen to the mayor of the town (who, as civic leader, was in favour of the highway) and a highway engineer who would tell of the great need and civic responsibility to have a highway bypass their town altogether. The townsfolk then unleashed a litany of complaints, all portrayed as selfish, entitled, and stuck in the past until a young female schoolteacher chastises them all and beseeches them to think of the children, for it is them that will truly benefit from the improved opportunities that will come from the highway. This, of course, was a self-fulfilling prophecy; by the time the children had come of age, Main Street would be hit hard and these small towns simply wouldn’t have enough jobs to go round, forcing young people to the cities.

Taylor highlights three critical concepts of the Interstate Highway System; frictionless travel which not only meant smooth roads but travel without barriers or obstacles; controlled access, designed to ease congestion by having designated entry and exit points but which meant that not every community had easy access to the highway; the bypass which literally passed by whole communities. The three concepts add up to an idealized yet privileged vision of social mobility and spatial fluidity. Both The Beauty and the Grandeur, produced by the Federal Highway Administration (1965) and Soaring Sculptures, produced by the Arizona Highway Department (1968) display this idealised vision, promising beautiful vistas, congestion free roads, and “highways in the sky” that would bypass urban areas yet transform them into recreational parkland and modernist architecture. Such aesthetic beauty though, was at odds with the detritus of America’s obsession with consumerism and the automobile, the endless garish neon advertising, junkyards, and fast food chains, whilst the inner cities steadily declined as the suburbs prospered and expanded.

It wasn’t just the ugly or garish that was hidden from view; all people of colour, but particularly African-Americans, were conspicuously absent from not only the public information films but also from the wider drive towards social mobility. If Taylor highlighted how that ideology was constructed then William Ackah deals with the consequences of that ideology on the communities that were denied access. Ackah concentrates on one such neighbourhood community, the Hill District in Pittsburgh, Pennsylvania, which in its heyday in the 1940s and 1950s was a vibrant, multicultural area known as the second Harlem, famous for its jazz clubs and home to 80,000 African Americans. The decline set in during the 1960s, firstly with the construction of the Civic Arena, which saw 1300 buildings demolished, 400 businesses closed down, and 1500 people displaced across Pittsburgh, ripping the heart out of the district. Of those 1500 residents, roughly 80% were black. The construction of the freeway that separated the Hill District from the thriving business district of Downtown further exacerbated this decline, creating a physical barrier to economic prosperity and social mobility.

Of particular interest to Ackah is how the church, still a strong presence in the community, is responding to this decline. The dilemma for the church leaders is economic as much as moral; do they stay and help the community or move away to a more prosperous area? According to Ackah, congregations have dropped dramatically from thousands in the 1940s and 1950s to little over 100. This is partly due to a decline in interest in the church, particularly from the young, but also due to a declining population. From 80,000 residents in its heyday, the Hill District is now home to less than 20,000, most of who earn a median wage of $21,000 per annum, which has also affected donations to the church. Yet the church is the third largest landowner in Pittsburgh, and even though the small, local projects the church runs, mainly in education and health, are welcomed, there is a sense that they could and should do more for these deprived neighbourhoods.

Thankfully, Ackah ends his talk on a more upbeat note, describing how, with the church unwilling to take the fight to the city council, community activism has flourished in the Hill District. With the area being a mix of green spaces and empty, derelict spaces, and with 75% of residents in social housing, the land is cheap, and developers have started to cash in. This gentrification has led to calls to preserve the historical black cultural legacy of the Hill District. The residents have grouped together to block developers from buying properties, lobbied to get a Shop N’ Save supermarket built, and pressured the Pittsburgh Penguins to redevelop the 20 acres of land around the Civic Arena after they relocated. They drew up the Hill District Master Plan that requires that 30% of all new housing needs to be affordable based on the median wage of the Hill District. It’s an uphill battle though; for every small victory, there is the continual push towards gentrification. Developers and the city council claim it pushes the real estate value up, and stimulates investment, but residents argue it amounts to social and racial cleansing by either rehousing those whose homes are demolished to other districts or simply raising the rent so that they can’t afford to stay.

The highways transformed America, expanding the cities into the suburbs, and accelerating the economic boom, but also destroyed homes, and divided neighbourhoods. Whilst whites were able to move to the suburbs, the blacks were confined to the inner cities and separated from their prosperous, white neighbours by the highway engineers’ uncanny ability to pick out black communities to run the highways through. The highways promised freedom and social mobility but not for all.