Life, Above All: Interview with Actor Harriet Manamela 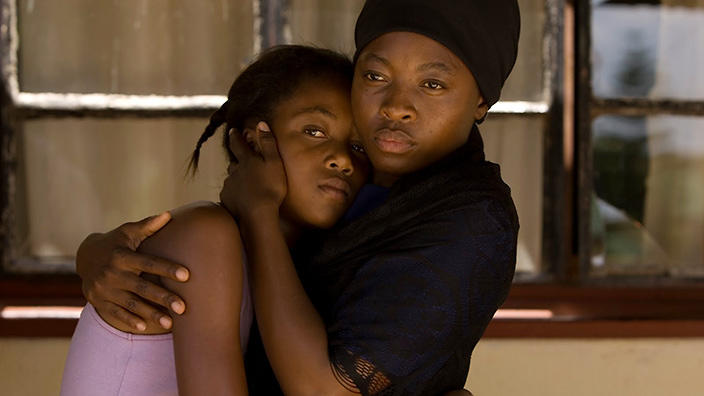 Life, Above All (Oliver Schmitz, 2010) screened at BIMI on May 3, 2019 as part of the Guilt Working Group’s ongoing series at Birkbeck. Below is an interview with its star, Harriet Manamela, conducted by Film Programming and Curating student Mickey La Rosa. It was originally posted on his blog.

A big hit at the 63rd Cannes Film Festival and selected by South Africa as its official Oscar entry for Best Foreign Language Film of 2010, Life, Above All is an adaptation of a book by Allan Stratton, Chanda’s Secrets. Chanda (Khomotso Manyaka) is a 12-year-old girl who lives in a South African township with her sick mother and siblings. When her baby sister dies of a mysterious illness, her mother Lillian (Lerato Mvelase) becomes so unwell and crippled by grief that she gets shipped off to her relatives, while Chanda is tasked with the insurmountable responsibility to fend for herself and her two younger siblings.

Help comes from Mrs. Tafa (Harriet Manamela), a good-hearted neighbour with a tough exterior, scarred by her own tragic backstory of a son apparently killed in a car accident. When Chanda saves her best friend Esther (Keaobaka Makanyane) from the harsh life of prostitution and then goes looking for her mother to bring home, she knows that harbouring Esther and Lillian from an increasingly judgemental community will put her family in danger, but for Chanda and Mrs. Tafa this might be their best chance to confront the unspeakable truth and stigma of an illness that has ravaged an entire nation. Filtered through young Chanda’s eyes, this is a story of survival amidst the devastation brought about by the AIDS pandemic, and shows the remarkable journey of two women determined to stand up for change.

MICKEY LA ROSA: Congratulations on your outstanding performance, the second collaboration with director Oliver Schmitz after Hijack Stories (2000). How did the project come about? Was the central role of women in this film a deciding factor in you accepting the part of Mrs. Tafa?

HARRIET MANAMELA: Thank you. Like most of all the work I did, I went for auditions. I got the role when I was called back for a second audition. Truly, I took it on as it was my first role where I had to gain weight for it and I believed it spoke to many of our people about the HIV stigma. I do roles to represent both genders.

MLR: You have a couple of tough scenes with the young protagonist Khomotso Manyaka (in an excellent debut feature performance). Both women are driven by their own conscience and are determined to follow through on their convictions: this brings about conflict, which makes for great drama. How did you prepare for those scenes?

HM: My preparations are mostly guided by the other actors, what they give during our performances. Khomotso was quite an amazing young actor to work with and she mainly guided me in her performance, which helped me to give the best I could with no pressure or underplaying my role.

MLR: In my opinion, Mrs. Tafa – along with Chanda – has the most interesting and rewarding character arc. She is forever changed by her protégée’s determination, belatedly learns to accept the truth about her own son and finds the inner strength to stand up for herself and Chanda against the townspeople. Did you plan out the character’s internal journey with director Oliver Schmitz from the very beginning?

HM: Playing Mrs. Tafa was challenging as I could only relate with her through what other people went through. Mr Oliver just allowed me to find her on my own and Khomotso just became the best person to help the role make sense to me.

MLR: It seems to me that the climate of AIDS denial depicted in the film is the consequence of former South African president Thabo Mbeki’s widely criticised claim that HIV did not cause AIDS. Many commentators claim that AIDS denialism might have caused the unnecessary death of over 300,000 South Africans, as they failed to be treated with antiretroviral medicines. In Life, Above All there is a scene in which Chanda’s drunk stepfather accuses his wife of having passed the virus to their baby daughter through breastfeeding. Do you see the film as taking a stand against AIDS denialism?

HM: The film just echoed how we all shied away from the truth. The stigma was just about not understanding how to deal with the deadly disease. Today we all understand and have accepted those living with the virus.

MLR: There is a sense of guilt that this film shares with some of the best contemporary South African dramas, for example the Oscar-winning Tsotsi (Gavin Hood, 2005) and The Wound (John Trengove, 2017). Do you think South African filmmakers are still exorcising the demons of a troubled country?

HM: I believe that filmmakers are just being filmmakers who choose to do films based on what speaks directly to them and the viewers.

MLR: The book upon which the film is based was written by a white Canadian author, and the film was directed by a white South African filmmaker, despite them telling a story set in a black township and viewed from a female perspective. In all honesty, do you think this story can be legitimately owned by them or do you believe it was ultimately marred by ‘white, male’ compromise?

HM:  I choose to believe that anyone can write a story about any culture based on a good research they did. We are all entitled to do films not because of the colour of our skin.

MLR: You have appeared in a multitude of award-worthy films – amongst them the Oscar-nominated dramas Yesterday (Darrell Roodt, 2004) and Hotel Rwanda (Terry George, 2004). In the USA, Life, Above All was shortlisted by the Academy as one of nine Best Foreign Language films, and was voted by the National Board of Review as one of Top Five Foreign Films for 2010. Do you always have a good instinct for spotting great human dramas?

HM: I guess I get chosen. I wouldn’t base it on my instincts.