A Conversation Up in the Sky: a preview of Adam Kossoff’s ‘Through the Bloody Mists of Time’ 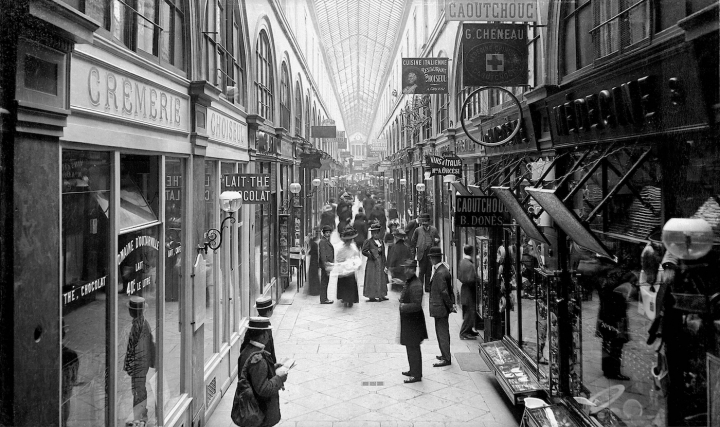 Walter Benjamin and Humphrey Jennings never met, but the two intellects surely have much to say to each other in Adam Kossoff’s new film. On February 8th, the Birkbeck Institute for the Moving Image (BIMI) at the Birkbeck Cinema enjoyed their impossible conversation as a preview screening of Through the Bloody Mists of Time, a work in progress that returns to Kossoff’s concerns about montage, urban spaces, and the dialectical image.

The film purportedly shows a slowed-down version of a 9.5mm film shot by Jennings during the Paris Exposition of 1937, when the horrors of war were about to fracture Europe’s heart and trust in its intelligence. As the images slowly tend toward abstraction, an ‘anonymous scribe from a story by Kafka’ (voiced by the Birkbeck academic Esther Leslie) gives an account of the discussions that the German philosopher and the British filmmaker hold ‘on a perch in the sky’. Though framed by fiction, the film unfolds as an essay, probing the contours of each of the thinkers’ ideas and contrasting them with the seductive, ghostly images of historical Paris.

‘There’s an essayistic principle and a fictional principle as well, the marrying of fiction and documentary, the kind of irony, a kind of wry sense of humour, hopefully;’ said Kossoff in the discussion after the screening. The audience had the chance to contribute their thoughts about the film, bringing a vivid clarity to BIMI’s goal of being a site for research and academic inquiry.

In the film, Benjamin and Jennings uncover shared concerns but also irreconcilable positions, tease each other, and reflect on their unfinished projects, both published posthumously. Both were experiments in montage, as is the film, in Kossoff’s words. For the Marxist thinker, The Arcades Project (1982) was a way of thinking about urban modernity since the 19th century; Pandaemonium (1985), also a collection of quotes, is the English artist’s overview of the coming of the Industrial Revolution from 1660 to 1886.

Is the film accessible to someone unfamiliar with Jennings and Benjamin’s work? Is there enough space for the images to ‘breathe’? How does the film speak to our present anxiety over division and identity in Europe and Great Britain? Such were some of the questions posed to the filmmaker and his collaborator, Esther Leslie, by curator and writer Dan Kidner, and the audience.

‘There is that continental / British culture and also what I call a montage of sound and image,’ explained Kossoff. Born out of a research proposal that did not take off, the film reflects on heritage, memory, and the debates around European identity. The ‘voices’ of Benjamin and Jennings sometimes make caricatures out of each other: the ‘urbane intellectual’ and the ‘little Englander’, but for the most part, lets their ideas articulate complex juxtapositions of philosophies and attitudes. Theirs is an exploration of the density of the concept of ‘montage’, with the cadence of prose poetry and the haziness of a long-lost recording. As Kidner pointed out, there is tension in the way in which pixels are imposed on top of film, the texture of the original footage. The blurry images also draw moments of great beauty, such as when fireworks fuse with water from fountains, or when the countless pavilions of the exhibition are shown in their evocative graininess.

In its use of archival footage, Through the Bloody Mists of Time departs from Kossoff’s style in a previous trilogy based on Benjamin’s writings: Not Our Darkness (2009), Moscow Diary (2011), and The Anarchist Rabbi (2014). Yet the focus on architectural figures, history, and memory connect them in ways that remain to be discussed in depth as the film is completed and encounters new audiences. As it was shown at BIMI, the film prompted the kind of thinking and questioning that its very form enacts on screen.