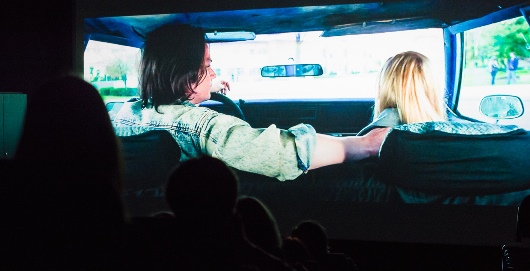 This article was contributed by Kelli Weston, an MPhil Film and Screen Media student

In October, BIMI hosted the University of Pittsburgh’s annual lecture with a special talk by Adam Lowenstein’s on David Robert Mitchell’s film It Follows (2014). Shot and set in Detroit, Michigan, the film’s environmental implications often take a backseat to the thrill of its monsters, killings, and gore. Lowenstein’s talk, entitled ‘A Detroit Landscape with Figures: The Subtractive Horror of It Follows’, places the film firmly within the contemporary political and social climate of Detroit, a city that has, in recent years, become synonymous with scarcity and desolation.

This scarcity is glaringly felt in It Follows, introduced by the event’s moderator Professor Roger Luckhurst as ‘the best horror film of the last ten years.’ The independent thriller concerns Jay (Maika Monroe) who learns early in the film that her new boyfriend has passed on a curse to her through sex. The curse can take any human form – in fact, ‘It’ often takes the shape of its victims’ relatives – and preys upon the haunted at a slow, deliberate pace. This slow pace allows victims a chance to run, but sooner or later with unwavering persistence ‘It’ always returns. The only way to transfer the curse is by having sex, but the reprieve is only temporary since when ‘It’ finally kills one victim it returns to haunt the previous.

Most critics have noted the parallels to HIV and other sexually transmitted infections, but Lowenstein contends that the true symbolic and literal horror of the film is the widespread emptiness, particularly underscored by the depleted population in urban spaces, ‘the loss of community.’ He argues further that economic grief has trapped the denizens of this area historically, as evidenced in the scene where Jay and her friends attempt to electrocute the creature by dumping all their household appliances in the pool where they trap It. ‘Their inventory is more in line with the black and white television sets and the 1950s-era programming they watch than common consumer items of the present day,’ says Lowenstein, mentioning the old movie theater, the old cars, and lack of computers and use of the Internet.

Of particular note, Lowenstein acknowledged the glaring absence of diversity in a city where the population is overwhelmingly African-American. Lowenstein laments this as one of the film’s shortcomings and Luckhurst reads this as a classically Gothic illustration of where ‘white patriarchy goes wrong.’ Lowenstein agrees the all-white places that the characters inhabit is already a ‘sign of decline’.